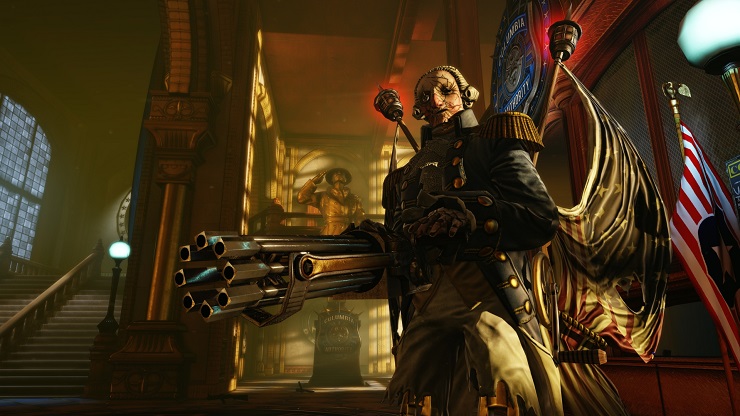 Picture the scene: you’re a games critic (I know it’s horrible, but please try to imagine it for me), and you’ve had an email telling you that the game you are most excited to play this year is arriving tomorrow. That “tomorrow” is Saturday, and you don’t care that you’ll have to work on a Saturday because you have no life anyway (remember, you’re a games critic), and the embargo is Monday.

But who cares, because BioShock Infinite is coming, and you have wanted to play that since the first release trailer. You’re a series fan, and you will happily ignore everyone for a full two days to ensure you get that game completed, and a review written. Only, you have been pre-booked to go somewhere on Sunday. It’s 10:30am though, so you’ve arguably got 12 hours or more if you forgo luxuries such as eating or shitting, and you want to play it anyway, so, it’s cool, right? It’s cool, you can do this – you want to do this.

It’s brilliant, of course. You all know this by now. The eventual standard industry turn happened, and it went from amazing to shit because reasons, but I still love it. 2013 me had been overjoyed to hear The Beach Boys God Only Knows sung beautifully by the barbershop quartet. That pre-rage but post-heart attack me hadn’t twigged that it wasn’t time appropriate for that song to be playing then, but I didn’t care. It had grabbed me by the knackers and was pulling me through the engrossing world of Columbia, one explosion at a time.

Infinite is just so memorable, full of sequences and moments I shan’t forget. At the risk of sounding like a shit observational comedian, do you remember the Booker and Elizabeth rendition of “Will the circle be unbroken?”, or the opening baptism scene? Chock full of impressive narrative stings that tap you on the back of the head when you think you’ve forgotten them. And that’s, of course, before you even talk about the ending. There are few games I can bring to mind when I try to recall endings that have made my jaw drop to the floor. Red Dead Redemption is up there, of course, but Infinite was just phenomenal. I’m sure people smarter than me have picked it apart and ruined it, explaining how it’s bad and why we should all feel bad for liking it, but I’m quite happy being the stupid idiot that just really loved it, and felt it tied a neat bow around the whole series. In fact, it holds the lofty position of being the only game series I would consider being “completely done”, but that I’d still somehow like more of. Unlike Mass Effect and Gears of War (series I consider finished that didn’t need more), BioShock’s world just draws me in like no other.

There were moments that made me worried I wouldn’t finish it on time. A self imposed time limit is  a bad way to play a game, but when I struggled with low ammo trying to kill the ghost of Lady Comstock, I was worried. It took some doing, and I had to take a break, but I pushed through it (for the record, that fight isn’t one of the highlights of the package). From there, it was pretty much plain sailing – just with an ever encroaching deadline on the horizon.

Then I got to the blimp fight. The endless feeling wave based blimp fight.  I tried being tactical, I tried aggression, I tried hiding; but nothing worked. I tried devil’s kiss, possession, I tried everything, but I just couldn’t do it. I was tired, and I was messing up more and more. I would send the songbird off at the wrong time, I would possess out of panic instead of saving it, I would waste ammo as I missed shots. I had to take a break. The bizarre thing is, it didn’t ruin it for me. I took a break, I came back and beat it first time. I was so enthralled by the ending I tapped out a load of words there and then, writing most of that review in the late hours of the day. I didn’t give it a ten, and we didn’t do half marks back then, if we did, it’d have gotten a 9.5.

BioShock Infinite is one of my favourite games of the last generation, and while the circumstances around playing it weren’t ideal, it didn’t hamper my enjoyment one bit. If anything, the pressure put me in a bubble of BioShock that enriched the experience. Or maybe I’m lying to myself. Honestly, when a game comes in that late, you’re gutted, but I wanted to play it anyway, and I enjoyed it immensely. I’m hoping this time around I can make time for the remastered collection, because I want to play them all over again. There’s always a tower, but there’s only one BioShock.

Editor-in-Chief here at GodisaGeek, I organise almost every bit of content as well as running our weekly Podcast, and being the lead producer on our YouTube Channel. That means I'm very busy and sometimes grumpy. Yay!
MORE LIKE THIS
2kbioshock collectionbioshock infinite