Why you should play Hide and Shriek this Halloween 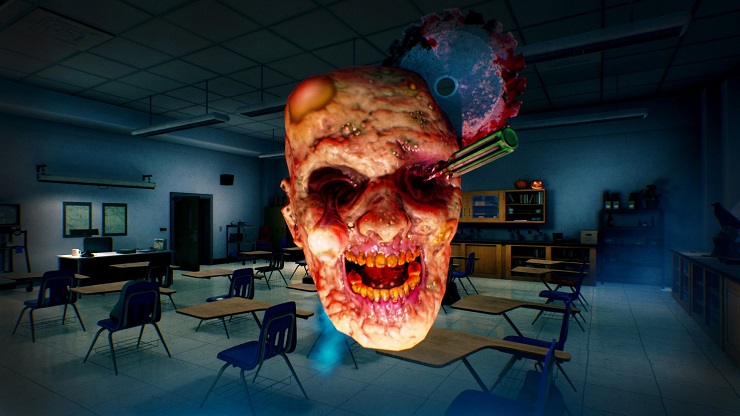 I’m not as young as I used to be, and I’ve outgrown so many things – things I used to love; Thomas the Tank Engine, Santa Claus, bouncy castles and those swings that look like a shopping basket to name a few. Another such thing is Halloween; I’m not going to wander the streets in a weird monster outfit at 33, because it’s weird. I don’t feel the need to celebrate it anymore, but that doesn’t mean I don’t miss it. If, like me, you want to do something spooky, scary or downright childish this Halloween, go play Hide and Shriek.

It’s not the best PC game you’ll ever play, and as soon as Halloween is over, you’ll probably find no reason to play it. The thing is, it’s actually a really good game and the amount of fun you can have with it is plentiful, whether you’re playing against a friend or a complete stranger. “What is Hide and Shriek then?” I hear you ask, and “Eurgh, what a terrible pun to feature in a game about Halloween” says the guy waiting for the latest round of his favourite fps to load up. Well, Hide and Shriek is a 1v1 online multiplayer, where you have to wander round a school trying to scare your opponent in quite a unique way. Every year on Halloween, one teenager from each of the schools of Little Springs High and Innsmouth Academy meet up on the stroke of midnight to scare the bejusus out of each other. The kicker though, is that both of you are invisible, and there’s no way of knowing where the other player is. It’s quite a smart concept, and as you begin to play Hide and Shriek, you begin to appreciate it even more.
Each round consists of 10 minutes and in that time, you have two ways to beat your opponent. Located around the school are orbs of varying colours; if you manage to find a red orb for example, and drop it onto the red altar, you earn a nice wad of points. The more points you have at the end of the 10 minute round means you win. The other way will stop the game dead in its tracks, and that’s to scare your opponent by shrieking at them. Invisibility does make it harder, but that’s where the beauty of Hide and Shriek comes in.

Observing your opponent’s every move can tell you plenty about their play style, and observing their behaviour can help you to rack up some easy points. If they want to be the orb collector, go wait by their altar. Sound is everything, and you’ll hear them open doors to get there; shrieking in your opponent’s face is fucking scary, as well as being completely unexpected. You build up this anxiety all the way around the school, and when it finally happens you’ll want to check on those lovely clean underpants you put on this morning. There are plenty of other ways to toy with your opponent and slow them down. Runes are located around the school, and by collecting them, you’ll be able to set special traps and abilities. Your opponent will open a cupboard and get thrown across a room, or they’ll get teleported to a weird, purpley alternative realm; they may even have all the lights switch off above them with only a menial glow glaring from a tiny bulb to guide them. There’re lots of variations, and they can cause some really authentic jump scares.
Hide and Shriek is a game that doesn’t take itself too seriously, and as you play, it feels less scary and funnier, mainly because you’re both at the mercy of these silly traps and random encounters. There’s plenty of customisation, and shrieks can take the form of Hilary Clinton and Donald Trump’s heads instead of the skull you’ll be used to. I never feel the need to mention price when talking about the validity of a game, but for £5.99, you’d be silly not to give this a go with your mates. Even playing with strangers is fun, as I have no friends. Seriously, none (stop laughing!).

Whether you’ve grown out of Halloween, or simply feel a bit too uncomfortable donning that tacky boiler suit and Michael Myers mask, give Hide and Shriek a go. It’s daft, rather well designed and chockfull with shit-your-pants moments. So what if you have to do more than one load of washing for your pants in the machine this week, having someone ruin your nerves by scaring you senseless makes you feel alive, and Halloween is the perfect time to do so.