How Mafia lost the soul 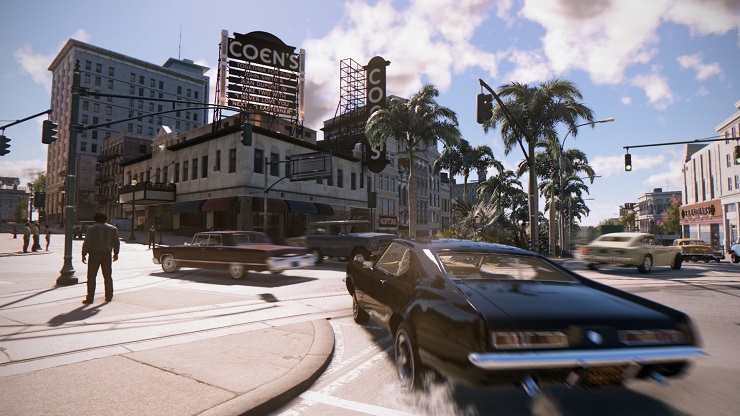 Those are the words of Doctor Ford, the creator of synthetic life and the god who controls Westworld: a theme park set in the wild west, populated by incredibly realistic androids. This is in a TV show, just to be clear, but Ford’s words have been rolling around in my mind ever since they were uttered during the climax of the second episode. Not only because they’re delivered in titillating fashion by Anthony Hopkins, but because the sentiment can be applied so heavily to video games, especially those which take place in open worlds.

It’s a theory, a philosophy, that’s so pertinent in some of the most critically acclaimed open world games of recent times. For instance, Grand Theft Auto V has a fully voice acted tour of Los Santos that can only be listened to if you just happen to board a tour bus. I still remember how ecstatic I felt when I discovered the skeleton of a man who’d been maliciously bricked in and trapped in a part of his basement in The Witcher 3: Wild Hunt. Even universally adored Metal Gear mastermind, Hideo Kojima, quoted Doctor Ford’s words and said that it was the exact theory of his own game design.

The only issue with these sprawling worlds that are so rich in detail and subtle delight is that they make all the other open worlds games that are released feel like giant, empty menu screens. Just a means to travel to the next mission and unlock the next snippet of cut scene. The pioneers in this industry have revolutionised open worlds, and it renders these standard worlds just a mind-numbing boring place to be.

No game suffers from this more, at this current juncture in time, than Mafia III, and what makes it even more painful is that its predecessor was one of the most engrossing open worlds that had ever been made at that point. I’ve been partaking in Lincoln Clay’s blood soaked quest to avenge those who wronged him for only a short number of hours, but I’m already painstakingly bored. Bored to the point that the other night I put down the controller and went to do the washing up instead. That bored. It’s not because the mechanics are bad; Mafia III’s impactful shooting and brutal stabbing are more than serviceable. It’s not because of the story, either. I like most of the characters and actually really enjoy the fresh way the story is told in a documentary style. Hearing about Lincoln’s actions and the effects they had on people really help to build anticipation, tension and dread. The reason I feel physically unable to go back to Mafia III is because I just don’t feel connected to its beautiful recreation of 1968 New Orleans in the slightest. Well, that and the mission structure is PAINFULLY dull, more on which later.

But first, New Bordeaux. The city that has been created really does nail the time of place, but there’s nothing within the world that helps anchor the player to it, to make it seem alive. The only thing that comes remotely close is that citizens will react to your crimes and will ring the cops, and then the police’s reaction will differ depending on which district you find yourself in. This is a great concept, but before long it’s easy to see behind the curtain, and it’s very easy to escape from the blue circle that represents the police on the mini map.

In Mafia II, the prequel in which you play as returning war hero (sound familiar?) Vito Scaletta as he tries to make a buck in such an unforgiving city, the police were more than just a circle on a mini map. They’d give chase if you were caught speeding, stealing or any nefarious act. Then, if you surrendered peacefully, you could bribe the beat cops to let it slide or be arrested. It felt real, gave options and made Vito an even more believable gangster. Mafia II’s world wasn’t a fantasy land, it was a recreation of real life and thus it made you play to its rules, rather than withering to the player’s whim to make them feel powerful. Yeah there were ways to bend those rules, you were a gangster, but you couldn’t break them to your own desire every time. Even Al Capone got done for not paying his taxes. Mafia II’s version of New York may well have been empty, something for which it came in for a lot of criticism, but it felt alive. It was entirely believable and, even though it was the most stereotypical gangster location ever, it was easy to connect to it. In Mafia III, there just isn’t anything that is tactile, there’s no way to interact with the world that isn’t shooting it to pieces. In Mafia II you could go under the hood and repair your smoking car, you could beep at a petrol station and an attendee would fill you up, you could go through the drive wash, flush toilets, flick off lights, turn on taps, eat sandwiches and drink beer out of your own fridge, leave bloody footprints, buy hotdogs in the park, get your shoes shined, completely customise every aspect of the vehicle you own, dress up in all manner of fancy suits; there was an actual hand combat system and lock-picking was an intricate system rather than a piss easy mini game. The list goes on and on.

It’s insane that a six-year old game had so much more detail and attention than it’s multi-million, blockbuster sequel. Mafia III may have an astounding sound track that at least helps nail the sense of time and place, but no physical aspect of the world helps connects players to it.

Now, let’s talk about that bloody mission structure because fuck me dead could there be a less inspiring way to pad out a game for umpteen hours? I mean by Jesus it’s really colour by numbers open world stuff, isn’t it? In fact, all the main missions in Mafia III, the way to progress the story, would only be optional side missions in better games. The “Go here, shoot them, destroy that, fuck off” mission structure is, quite simply, dreadful and a guaranteed way to make a game as memorable as a 0-0 draw. In Mafia II the missions were all set pieces, specifically designed to give story as you play, not a way to unlock a cut scene, and they were varied, too. Be it lifting crates in a dead end job, or avoiding being raped in prison showers, be it selling cigs out of a truck to try and make a buck, or disguising as window cleaners to go and kill all your enemies. Mafia II had memorable missions, stories, that further helped players to connect to the world, the characters, and just to have an interesting time.

I loved Mafia II because of the subtleties and the details, not the obvious things, not the garish things. Mafia III went the Sizemore route, Mafia III lost the soul.