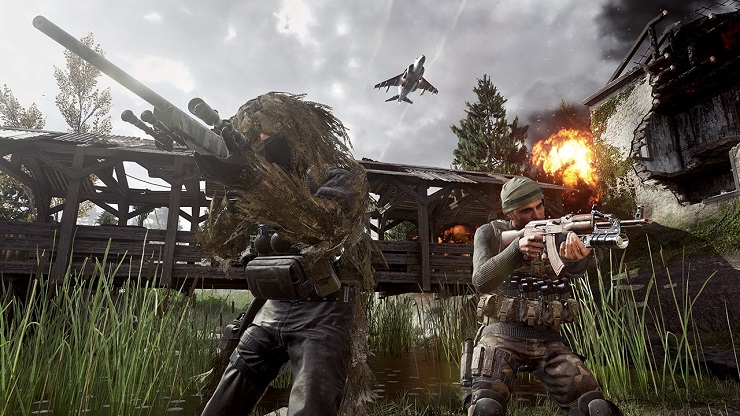 Last month I wrote my thoughts on the Modern Warfare remaster that comes bundled with Call of Duty: Infinite Warfare. In that review I talked about how nostalgia can sometimes cloud our memories of a thing, and that often, times re-visiting something that was beloved in the past can sometimes turn out to be a disappointment, or at the very least not be able to live up to the notion of what you believed it to be. Playing the campaign of Modern Warfare again was a real treat, with the developers at Raven giving the game the care and attention it and its reputation deserved, but at the same time I felt that by playing it again I was trying to recapture a feeling that is impossible to recreate, and that ultimately the remaster, while an exceptional remake, was just a ghost of the original game.

Fast forward six weeks and Infinite Warfare has released which means that the multiplayer section of the remaster is live. I’ve spent a bit of time with it and can conclude that my feelings about the nostalgia of the campaign carry forward into the multiplayer, and there is a sense of disappointment there. Not because it isn’t fun, because there is fun to be had, but more because it plays very different to how I remember it, and furthermore it stands out as an example of how much Call of Duty multiplayer has evolved while also managing to remain exactly the same. Firstly, the multiplayer for the most part is exactly the same as it was when it first released. Kill streaks are limited to UAV, Airstrike and Helicopter after achieving three, five and seven kills without dying. The perks system is the same even down to the annoying Juggernaut perk that requires you to put more bullets into your enemy than would otherwise be necessary and the attachments for your weapons all remain largely untouched. The in game challenges appear to be exactly as I recall them to be, although there is a slight change in that they aren’t all available at once to try to unlock, but are gated behind achieving certain levels. The reasoning behind this is to presumably try to slow down the rate that players rise through the ranks to hit the ultimate ‘Prestige’ level which has been raised from ten to twenty (an increase of ten levels from the original release of the game).

Kill Confirmed is in the playlist where it wasn’t included in the original and there are also some emblems and player titles linked to certain challenges that you can collect as well as weapon skins for your guns that have heavily featured in later Call of Duty games, but were never part of the core make-up of CoD4. Not all the maps from the original are included either, there is no Shipment or Wetwork for example, although these are expected to be added later. So, how does it play? It’s ironic that the original Modern Warfare’s online element has been the inspiration for many copy cats, and now that it has been remastered I can’t help but compare it to the likes of Titanfall 2, for example. Movement style notwithstanding, the technical aspects of the remaster cannot compete; hit detection feels looser and the time to kill is inconsistent at best. Feedback from weapons, while significantly better than its cousin Infinite Warfare, feels inconsequential and lacks impact, and despite all the countless iterations and improvements on Call of Duty multiplayer over the years, the game still seems to rely on a peer to peer network where ping is king. In a run and gun game with a low TTK, that fast becomes an annoyance.

Over the years Call of Duty maps have become smaller and smaller; in vast contrast are the maps shipped with the remaster. So large are some of them that the games are just two teams of snipers pointing scopes at each other from each side of the map – particular offenders are Crossfire, Ambush and Overgrown, which are constant snipe fests. As someone who likes to get up close and personal when shooting an enemy player, some games are an utter bore of cagily creeping round corners only to be sniped by someone who has their scope trained endlessly in one place. Perhaps the multiplayer was always like this and I have forgotten what it was like, but it feels out of place and consequently not fun, and ultimately not what made Call of Duty online so phenomenally popular in the first place.

Modern Warfare Remastered is still a fantastically packaged extra for Infinite Warfare. It’s a fun diversion to drop into a game that is slightly slower paced than more modern online games, but it feels like a step backward in every aspect when compared to games that are out now. Perhaps I have moved on from the things that I enjoyed when CoD4 was first released, or perhaps the remaster further emphasises the need for Call of Duty as a franchise to evolve if it is to remain the top of the field.

Likes to shoot stuff and wear pretty shoes. Is a BEAST at Titanfall.
MORE LIKE THIS
Call of Dutymodern warfareMultiplayerRaven