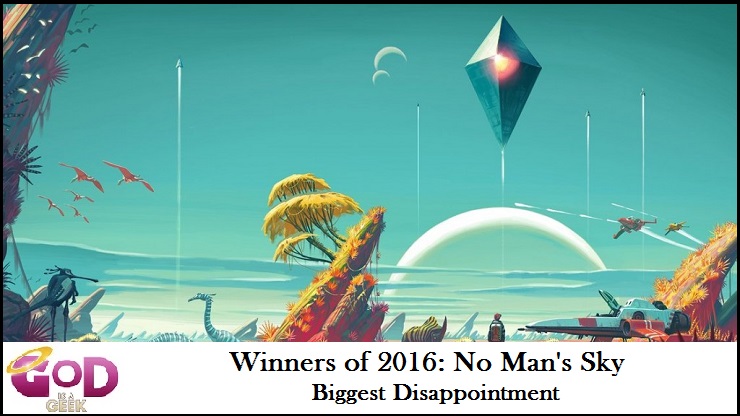 I’ve wanted to write this article for some time.

There has been no other game this year – or in fact ever – as appealing or as in tune with what I wanted out of No Man’s Sky. Endless exploring through space, visiting brand new galaxies undiscovered by anyone else, and finding catharsis under a starry sky was my idea of heaven. I wrote a few articles myself, with others contributing their own features as to why they were looking forward to it; Hello Games got a lot of coverage from us, and through all the hype, I bought everything – I swallowed it all up.

In the months since it came out, there’s been a lot of blame as to whose fault it was, but I don’t think it’s fair to place that much culpability on any one party. The game was a massive disappointment for a number of reasons, and I just felt an overwhelming loss of happiness. In the midst of a billion galaxies, I was distraught that the one game to finally harbour every dream of space travel and exploration I’d had as a kid had thrown me into a void – a dark abyss of disenchantment and naivety I’ll probably never come back from. It may sound ridiculous, but it was marketed perfectly for me. All the footage pre-release showcased hundreds of different planets and creatures I was likely to meet, and how you had all the freedom in the world. There was no story, but I was so excited to make my own adventure. I’d decided to do a Captain’s Log, writing something every day for the first couple of weeks, but after a solid ten hours or so, No Man’s Sky’s emptiness started to become more prominent.

I could build a hyperdrive and travel to a new galaxy, I could explore every planet, I could find brand new lifeforms, and I could uncover the mysteries of the universe. What I found was minimal differences in many of the planets and fauna; galaxies weren’t that dissimilar, and there was no real motivation to do anything. All space stations looked identical, aliens were one of three different races, and they only ever said a selection of things (through written dialogue); No Man’s Sky felt dead – lifeless. For a game marketed on adventure and exploration, there was very little there. It was a vapid, dull experience, and I’m still reeling from how much it made a fool of me. There were times when playing that I thought “things are changing,” or “maybe I’ve been wrong about this”. Back in August, I was doing a 24-hour charity gaming marathon, and for the last three hours I decided to play No Man’s Sky. I don’t know why, but I felt like I should. That way I’d be forced to stick at it and try to enjoy it – try to understand what this game actually was. I found a planet covered in purple, pink and green plants, flying reptilian birds and weird, fluffy creatures. It felt different. The planet I stumbled upon was nothing like anything else I’d seen, and I felt home. After discovering all but one of the planet’s species, I left to see if this feeling could be replicated.

The final planet I visited (and I’ve yet to go back after not playing for over four months) was a desolate escape, sandstorms occurring every second, and zero life as far as the eye could see. The air was poisonous, and I’d be sure to die if I got out my spaceship. This planet was similar to all the other dull and empty planets I’d encountered, but it had a sense of finality to it. I knew this was the end. I opened the hatch and left my ship. From the moment I set foot on the ground, my health started to deteriorate, and the sand started to get into my lungs. I kept walking into the distance, the blowing of the storm passing my ears and the hazy nothingness encapsulating my vision. I was looking for catharsis in the wrong place; either that or it was the wrong kind of liberation I’d been searching for. I could no longer see my ship, and all of my equipment had run out of fuel, and just like that, I stopped moving. My life had ended, and so had my time with No Man’s Sky.

There has been a new update that includes base building, but as far as I’m concerned, it’s over for me. My hope for that game died in that sandstorm with me, and whatever gets added, I doubt very much that it’ll do anything other than ruin an already disappointing experience. I’ll never be so stupid or naïve again, and I’ll never buy into the hype quite as much as I did with No Man’s Sky; I was expecting the ocean, but got nothing more than a raindrop.

Video games are cool. Don't let anybody tell you any different.
MORE LIKE THIS
goty 2016hello gamesNo Man's Sky

Uncharted 4 said goodbye to the series with wonder, emotion, and nostalgia