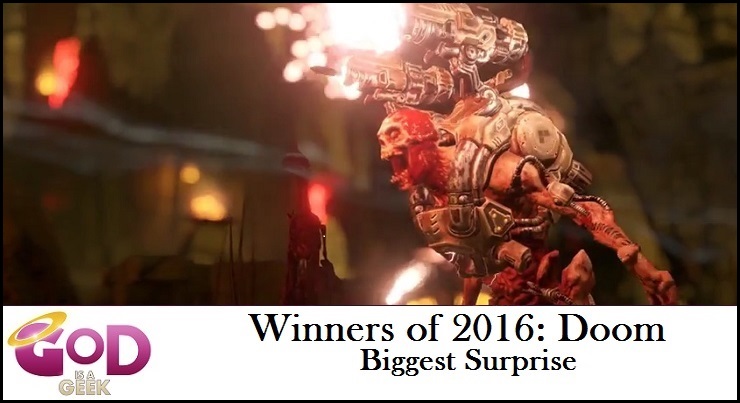 Doom is the perfect FPS game for me. I am an avid shooter fan with a particular penchant for getting up close and personal, and that combined with the intoxicating blend of excellent gun play, pulsating soundtrack and the endless, rhythmic motion is my shooter alter ego’s wet dream.

Universally praised at launch, it is hard to look back and realise that before it was in our lives, many felt it wouldn’t live up to the enormous reputation Doom as a franchise has. The original game released back in the early 1990s was, and still is a genre defining classic; when id Software first announced that the fourth iteration of its classic IP, nattily titled Doom 4, was being scrapped in favour of a re-imagining of the original, a few people were worried, myself included.

An early Beta for the multiplayer did little to assuage fears that the game wasn’t going to live up to expectation and pre-launch nerves were further confounded when Bethedsa announced that review copies for critics were not being sent out early and were instead going to be released a day early meaning that early access reviews would not be ready in time for official launch. In the past this kind of late review copy handling generally pointed towards the knowledge that the publisher had a dud on their hands and by restricting early access the publisher mitigates as much as possible any damage critical negativity might have on sales. Not so with Doom. Upon launch it was quickly lauded as a critical success and figures show it has been a commercial success for publisher and developer. An unexpected surprise then, and having recently just finished it I can happily say that Doom is in the running for my Game of the Year 2016, and has firmly rooted itself as one of the best shooter games I have played in a long time.

But what makes it such a surprising and successful game?

Firstly, from a design standpoint it is an incredibly lean game. There is no bloated tutorial at the beginning, instead the player is launched immediately into battle with a gun and a few enemies to kill. Similarly, there is no lengthy story exposition to explain what has happened on the facility; right from the start it is clear this is a demonic invasion and your one task is to kill every last one of them. Little inflections of humour at the start when you as Doom Guy literally throw to one side the computer that one of the characters is talking to you through to explain what is happening, sets the tone for the rest of the game – that you are here to kill demons (which you are exceptionally good at), and you are going to have great fun doing it.

From that introduction you are thrown straight into the dance that is the combat of Doom, a relentless, constant ballet of strafe, shoot, jump, mantle, run, shoot. Standing still is death. Killing is brutal, and with the introduction of the glory kills, some of the most visceral I’ve played in a long while. You as the player are encouraged to constantly move forward, your health and ammo are limited, but stagger an enemy and you have the opportunity to perform a glory kill that will destroy the enemy in a satisfying, gruesome animation where health and ammo burst out of them like joyous death confetti.

The core gameplay loop is nothing but shooting demons; you will be asked to locate keys to open up areas that lead to more demons and secrets that in some cases can help you kill demons more effectively. Gradually you are given a larger and more deadly arsenal of weapons each with their own unique upgrade trees via modules you locate in the levels, and then kill demons to acquire combat effectiveness currency to spend on them. Your arsenal is a dizzying array of rocket launchers, shotguns, chainguns, pulse cannons; you even get unique, super powerful one shot weapons like the chainsaw and famous BFG that can devastate powerful enemies in one go, and can be the difference between success or failure when the game continues to throw more and more demons at you. Littered about some levels are powerups that can also help turn the tide of battle, with my favourite being the hilarious “Berserk” one. Upon activating this your character inexplicably has fists of iron and can one punch any enemy to death. The powerups are time limited, but dancing around the level one punching even the largest demons Doom has to throw at you is a gratifying delight.

And then there is the soundtrack, a perfectly attuned blend of heavy synthesised sound and metal guitar that always seems to ramp up the effects during particularly dramatic events in the level. At it’s best the soundtrack is a furious companion to the killing, serving to provide the rhythm from which the demon killing can be achieved. At it’s most frenetic, it is almost like a rhythm game, the thuds of fists performing glory kills perfectly timed to the beats of the soundtrack, and it constantly pushes the player forward.

There are a few missteps, in particular, it does slightly outstay its welcome, going on for a couple more chapters than it needed to, and the boss fights are a little underwhelming – utilising old school methods of making them difficult with two phases to them. But these are minor complaints.

Doom is an incredible example of a shooter that understands what it is, and what makes it fun to play. Id Software has kept a laser focus on what it wanted to deliver with Doom, and the self-aware tone that it takes right from the beginning further amplifies the fun; without it I think that the violence of the killing that at times borders on gore porn would have become tiresome towards the end, however, the thread of humour and ridiculousness that is woven all throughout it keeps it on track. Doom really is an incredible first person shooter, a fitting tribute to its legacy, one of the best games of an incredible 2016 for games, and the biggest surprise of the year.

Likes to shoot stuff and wear pretty shoes. Is a BEAST at Titanfall.
MORE LIKE THIS
Doomgoty 2016id Software