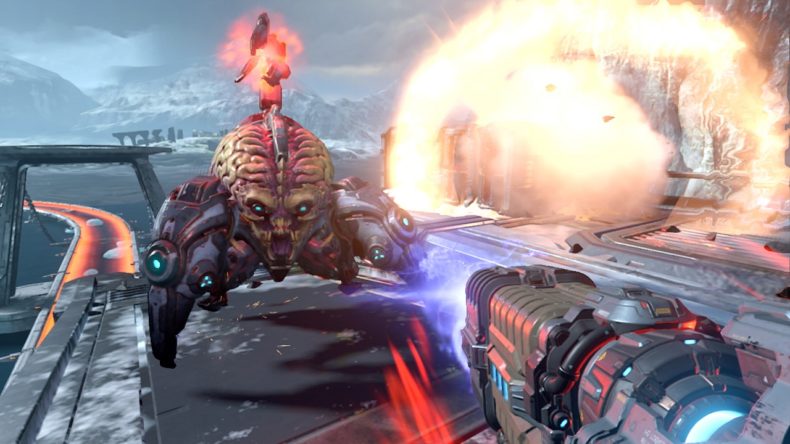 Switch FPS fans will be rewarded for their patience today, as DOOM Eternal is out now on Switch. Developed by the same team that did the masterful Wolfenstein and DOOM 2016 ports, you can play the critically acclaimed FPS wherever you want for £49.99. If you purchase the game before December 21st, you’ll also receive DOOM 64 and the Rip and Tear pack (which includes a remixed level and other goodies) for no extra cost.

“id Software’s DOOM Eternal, nominated for four awards at this year’s The Game Awards (Game of the Year, Action Game of the Year, Best Score, and Best Audio Design), is available now on Nintendo Switch. Developed in partnership with Panic Button – the studio behind the Nintendo Switch ports of DOOM (2016), Wolfenstein II: The New Colossus, and Wolfenstein: Youngblood – players can now experience the epic single-player campaign at home or on the go.

Experience the ultimate combination of speed and power in DOOM Eternal with the next leap in first-person combat powered by idTech 7. Armed with a shoulder-mounted flamethrower, wrist-mounted blade, upgraded guns, new abilities and more, you’re the greatest demon slayer in existence.

Players have the option to enhance their aim with Motion Aiming, a control option that utilizes gyro controls. The option can be used in conjunction with the control stick for the perfect blend of immersion and accuracy. Players can also test their skill in BATTLEMODE, a 2 vs. 1 online multiplayer experience. A fully-armed DOOM Slayer faces off against two player-controlled demons, fighting it out in a best-of-five round match.”

The new online mode sounds very interesting, and is tempting me into double dipping on one of my favourite games of the year. I’m hopeful the port is as good as previous Bethesda games released on the Switch, because everyone should try out the best DOOM game since DOOM 2.