Nier: Automata is Platinum (and Nier) at its best 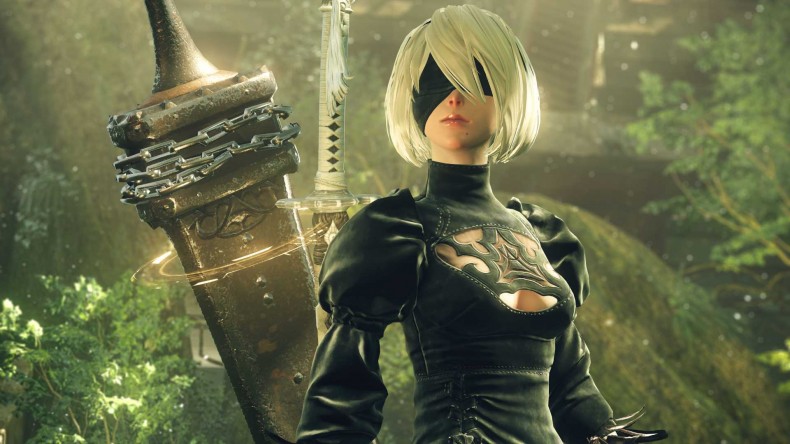 It’s not that Nier was bad. It just wasn’t Quite Good Enough to recommend to someone without attaching a series of caveats to it. If someone asked you what your opinion of Nier was, you could enthusiastically reply “hey, I loved Nier! It’s great! You should play it!” You could mention how characters like Emil were genuinely funny, the gameplay had interesting kinks to it such as bullet-hell mechanics and New Game+ adding new story, while the soundtrack was amazing.

But that would be followed by a slight frown because Nier also had a lot of problems. The combat was button-bashy. The gameplay wasn’t quite varied enough. The graphics were bland. The pacing occasionally dipped to checking-Twitter-and-Facebook-and-Twitter-again-just-in-case levels. And at that point, you get the “oh… okay I don’t think I’ll bother then” and you just end up feeling like you’ve let everyone down.

It’s difficult to whole-heartedly recommend any game in those circumstances. Same as you wouldn’t recommend, say, the lasagne at a restaurant because sometimes they don’t cook it properly and they put a weird chewy ingredient in the middle you don’t recognise and the portion is a bit small and you’ve heard rumours that the waiter with the moustache sometimes spits in the food. I mean, for god’s sake. We’re recommending Nier based on its soundtrack being good. You wouldn’t order the lasagne because it’s written in a nice font on the menu, would you?

Nier: Automata, thankfully, will be much easier to recommend.

That much is obvious from the tutorial area alone. With Platinum Games at the helm, a fact Square-Enix keeps mentioning like someone who just won’t bloody shut up about their new partner, expectations are high for the combat. You hope some of the magic from Bayonetta and Vanquish has rubbed off on 2B, the android you play as in Nier: Automata, as the first robots rumble into view.

This first batch of robots have comically slow wind-up animations for their attacks, with glowing red eyes that fire up in case their windmilling limbs wasn’t a big enough signal of their intent. That’s your cue to dodge out of harm’s way, as you start to feel your way around Automata’s controls. It’s also where the ‘oh my, aren’t Platinum Games great!’ feeling first kicks in.

You’ll leave behind a shimmery silhouette with each successful dodge, and you’ll also open up a new moves list as you come out of each dodge. After a few minutes of practice, you’ll be gliding around the tight tutorial arena, dodging from robot to robot and leaving them reeling in hit-stun animation, twirling around in a blur of swords and silhouettes. This might be Nier’s world but the combat is pure Platinum, distilled at a silky-smooth 60 frames per second. Nier newcomers will also be shocked to discover that 2B can shoot, with a lock-on targeting the nearest enemy (although this lock-on is automatically disabled at higher difficulties). It’s not a great offensive weapon, barely chipping away at your target’s health, but it works well as a defensive tactic. Your giant projectile blobs cancel out those being fired at you by enemy robots, and you quickly learn that laying down a wall of fire is the safest way to move around an arena full of hazardous projectiles.

Combine that with 2B’s ability to jump and juggle enemies in the air and you have a surprisingly three-dimensional action game – you can engage and defend yourself from near, from far, and from the air. It’s leaps and bounds ahead of Nier’s combat.

But no-one ever felt a stirring in their gaming crotch fighting tiny robots with slow windmill arms, a fact Platinum Games recognises when a giant saw blade crashes into the tutorial arena and forces you to defend yourself. This is effectively the first boss encounter, mere seconds after you’ve been told Square is for light attack and Triangle is for heavy attack. It’s here that you get your first taste of the eccentric Nier side of the game, as the scale of the battle is enormous and you’re fighting a giant saw blade. It’s early proof that Platinum Games goes much larger with Nier than it did – or perhaps was allowed to? – with Transformers: Devastation and TMNT: Mutants in Manhattan. Roughly one hour on from this encounter, you find out that the saw blade belongs to a massive oil rig, WHICH IS ACTUALLY A GIANT LIVING BREATHING ROBOT YOU MUST FIGHT. Robots don’t live or breath but you get the point. It has a face, and limbs that it swipes at you with giant sawblade limbs, and it mumbles “kill” in a low, rumbling voice which is probably as close as to what you’d imagine an oil rig would sound like if it could talk. It’s a huge surprise to be fighting such an odd boss. The encounter starts in traditional giant boss format – you’re on a small ledge and you can attack its flailing limbs when it tries to hit you and misses – but then it goes full on Nier, shifting to Space Harrier-inspired gameplay as you fly around in a mech, slapping the oil rig with its own severed limbs.

Because the other thing that made Nier great was how it wasn’t afraid to push boundaries with its gameplay and story, spicing up its hack-and-slash formula with some genuinely stunning moments. Even in this early hour of the game, there’s clear evidence Nier: Automata packs them in too – there’s the previously mentioned Space Harrier moment, there are sections where the camera switches overhead and the game becomes more like a top-down shooter, there are platforming sections with hidden chests to reward curious gamers. And there’s a lot more to come in the final game, such as how you can micro-manage your chips. This is a closer nod to the RPG side of Nier and while we haven’t yet been afforded a full look at how this will work, it will give you the option to customise what chips 2B uses. You can even move the mini-map chip to create room. You can remove the OS chip for an instant game over, just because that’s the sort of details Nier: Automata thrives on. Honestly, that sort of detail is everywhere. It has dual-language options for English and Japanese, both for the audio and subtitles, and a ‘Very Hard’ difficulty mode for masochists that want to play on one-hit KO settings.

You can even toggle the camera settings, adjusting the speed with which the camera follows you, the set angles, whatever you want. You even can whack all the camera settings up to max, even though it makes the game unplayable, as we found out while Square-Enix staff looked on. “Ryan, please stop,” sigh a disappointed voice behind me. “Ryan why are you like this.” Followed by an uncomfortable silence as I spent the next 30 seconds putting the sliders back to default, one by one.

That’s Nier: Automata, a game that’s marrying the original’s strength of a fascinating world and brave gameplay twists to the prestige and experience of Platinum Games. If we’re going to go back to that terrible food analogy, which I definitely shouldn’t have done but it’s too late now, this has all the right ingredients to be a three-star Michelin meal. And it’s being cooked by Platinum. And tastes of Nier.

And look, I have no idea where this food analogy is going anymore. You fight a massive oil rig. Isn’t that all we want from our games?

NieR: Automata confirmed for Xbox One, releases digitally on June 26