previous
Mega Man 1-6 release on iOS and Android next week
random
next
Titanfall 2 is the unsung hero of 2016, and deserves every bit of your attention
0 comments 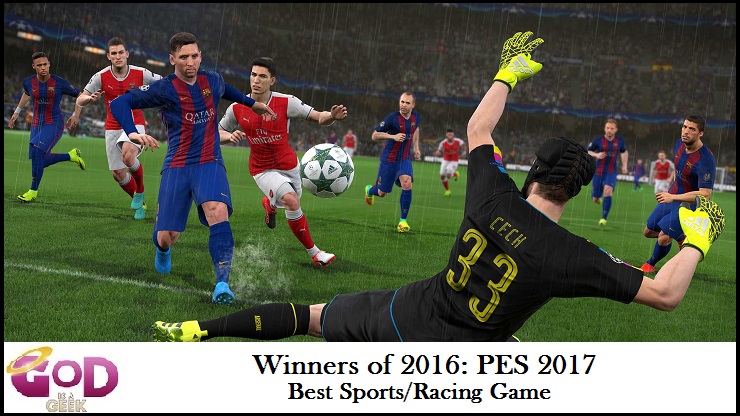 Writing about Pro Evolution Soccer has become a little difficult in recent years. It’s not as if the game isn’t good, or that there isn’t much to discuss in it, because by christ there is. The issue comes from how PES has subtly improved year on year to repeatedly make the best football game ever created. It’s reminiscent of new Gillette razor adverts, “last time we had four blades but now we’ve got, wait for it, five blades! All to make the closest and most comfortable shave yet.” It sounds stupid because the improvements can be difficult to notice, but it’s these delicate refinements that allowed PES 2017 to dethrone its predecessor in a Game of Thrones fashion. Oh, and they had some pretty revolutionary mechanics thrown in to boot.

The epitome of this continued tweaking of PES’ mechanics is with the passing. In PES 2016 there was the slightest millisecond of a delay between pressing the pass button and the input becoming a reality on the screen. It was obviously apparent, but once it was noticed it was impossible to see anything else, like noticing that Nacho Monreal is just a tiny version of Peter Crouch. However, with PES 2017 the passing was again refined – the fat shaven off, and it felt perfect. Crisp, precise, varied, and that was just one of the several refinements that Konami made. Tackling, skill, running – the spectacular design of some of the players and of course the ever amazing feeling of scoring a goal all were finely tuned to feel even better in the 2017 edition. But, as was alluded to earlier, it wasn’t just the improvements of the basics that made PES 2017 so spectacular it was the edition of the most revolutionary feature in football games for sometime: Player ID. In other football games, the different players don’t actually feel all that different at all. Maybe some were faster than others and maybe some could do a fancy trick that others could not, but ultimately only the footballers felt exactly the same – there was no variation. PES’ Player ID makes so many of the world’s top footballers feel completely distinct and, exactly like their real life counterparts.

I remember being stunned when I first discovered this, through the fact that Manuel Neuer starts further off his line than other ‘keepers, because that’s just how he plays. Then I started noticing it all over: the composure of Kroos, the strength of Giroud, the dominance of Pogba, the elegance of Dembele, the raw pace of Sane, and the effortless skill of Lionel Messi. You could recreate a movement, piece of skill or a shot at a particular angle that a player is famed for, for example Arjen Robben’s classic cut inside from the right and score, and it would appear on the screen, looking just as authentic as it does in reality. It was my favourite part of PES on the pitch in 2017, and can’t wait to see what refinements it goes through in the future. One of the issues that comes with being a PES fan is convincing your brand loyalist pals that it’s miles better than that other football game doing the rounds, and it really is a struggle. I’m continuously the but of jokes and jibes in the group chats for being the one black sheep that refuses to fall into line. But, a remarkable thing happened at university this year as I moved into a flat with some friends; all of them started playing PES. Now, admittedly the other game was not an option in the flat as no one had it, regardless, while they played it, most of them went from hating PES to admitting it actually was pretty good. Which is hell of a testament to the game.

Being able to play PES 2017 with friends actually sat in the same room really elevated the joy I had with it this year for me, having everyone viscerally react to moments of magic is always more fun when you’re all sat together and can gloat about such occurrences of splendour. Admittedly, playing for so many hours with so many pairs of eyes did make some of PES 2017’s flaws stand out: goalkeepers are still capable of unfathomable clangers, referees would probably let an actual murder off with a warning and some of the most stupidest goals you’ve ever imagined can be scored. But, and I may sound like a hypocrite here, defending something that I would slag off else where but fuck it, for me it kind of gives PES a charm. Not everything is perfect, robotically created off a conveyer belt to be perfect all of the time. This is football and in football stupid shit happens on a rather regular basis, and even if it can be infuriating for those on the receiving end, the stupid stuff really does give PES a soul.