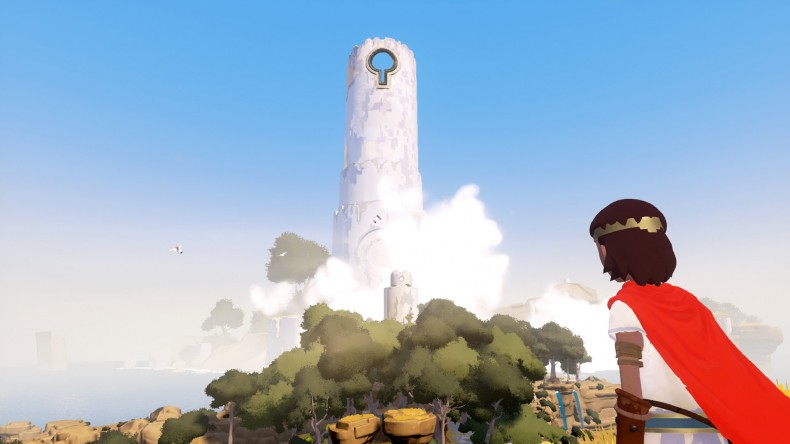 Rime is a beautiful looking game. That’s the sentiment I remember taking away all the way back in August 2013. The title had just been announced alongside Gran Turismo 6’s release date and Everybody’s Gone to the Rapture. For some reason, that conference still lingers in my mind, which is no small feat due to the conference dense calendar we now enjoy in the games industry. Rime may well be one of the reasons it still hangs in the memory.

For a game of its size, it’s had a long development cycle. Of that, there is no getting away. “We’ve been developing!” associate producer Miguel Paniagua tells me when I ask him what’s been keeping the game. Of course, that isn’t all. One key difference between when Rime first appeared at Gamescom 2013 and when it reappeared earlier this year was that the game was no longer a PS4 exclusive.

Paniagua explained that “There was a point with Sony, we had different points of view, and Tequila works decided to re-own the IP because we wanted to have full control of the vision we had for this project.” Five years on from Tequila Works last game Deadlight, Rime now finds itself fighting in a market where beautiful adventure-puzzle games are a rich and abundant genre. With games like The Witness, The Last Guardian, and Abzu all making impressive outings last year, Rime now finds itself in a world where being an eye-catching and subtle puzzler isn’t quite as unique a sell as it was when the game was first revealed.

Having spent around an hour with it though, don’t write this off as just ‘another one of those’. That’s to say, while Rime is certainly from the same cloth, it has more than enough going on to feel distinct, and importantly, enthralling. Paniagua talked a little of this new trend in the genre: “I’m not sure about the market tendencies and why that is happening, but I think puzzles are one of the main natures of games. It’s a challenge for the mind. It’s not just like I’m going to tell you a story where you have block text and it isn’t a violent adventure where you have to shoot everything. The players are growing older, but also, we’ve always been playing with those puzzle games. Puzzle games, it’s not like they are in fashion or more popular, they are always going to be there.” From the portion I was afforded the opportunity to play, it became clear the level of refinement that Tequila Works have been putting into the game for all these years Rime is a game, at least in its earlier portions, that seeks to guide and pace your journey as a wordless boy in a deliberate way. Its puzzles are not rudimentary, nor are they walls to beat your head against. Generally, they work by you interpreting a few visual queues to lightly hint at its purpose. This usually manifests itself with you needing to ‘sing’ to a statue, which then generates energy that makes its way to a marker on a door. Usually, these markers are obscured by something, and it’s a case of timing and ‘logicing’ your way to the solution of opening said door. They feel beautifully designed to reveal themselves to you as you work your way through them. Besides one instance (of which was probably mostly my fault for being a numpty), they felt pitch perfect in terms of alluring you at the right times. That is something that didn’t necessarily come easy though. Paniagua says that a lot had to be tried and discarded to get to this level of draw.

“We wanted to make a very fluid and emotional experience, so Rime isn’t just about puzzles. It’s also to do with stories. They aren’t just there to challenge your mind, they are there to tell you little bits of stories. There was a moment when we had 500 different puzzles, but we threw out a lot of that. The puzzles we have now are selected for every moment because we thought they had impact on the narrative.” This is a trait that underlined my entire time with the early sections of Rime. It invites you to trot down its path leisurely in subtle but authoritative ways. This is accomplished with a synchronised mix of camera work, art, and game design. The stark colour scheme of the game helps build this aura of effortlessness that feels like it’s pulling you through the environment in the best way possible. It gives the game a real sense of pace, which is something so many struggle with. In the section I played, I never felt like what I wanted took too long to get to, and even when I got lost in the little nooks and crannies Tequila Works has put into the game, it merely felt like a meaningful detour that helped build the universe of loss that permeates the experience.

The first environment I played through has a calm, Mediterranean vibe, which is obviously calculated. This is undoubtedly what you will think when you conjure up the game in your mind’s eye. Almost all we’ve seen of the title so far leans on this setting. It has the sense of getting lost in a Greek sun, exploring a long lost civilisation. That vacation vibe isn’t all this game is packing though.

Indeed, there is a second area I got to poke around in that felt altogether different. More threatening. On top of a very present danger in the skies which completely changes the priorities of the boy, there is also a dull sinister undercurrent the means the environment feels less like a holiday to the south of Europe, and more like you’re lost in an environment that is watching you; taunting you to solve its puzzles. This was an important section to play through as a player trying to ‘preview’ what this game is. There is variety in its journey. The recent insurgence of adventure puzzle games can sometimes fall down the path of being just a little too passive or one note, and I will say, in this second area of which I only scratched the surface, Rime is certainly threatening to break that mould. And just to be topical, yes, the game is indeed coming to the Nintendo Switch. That seemed to be a natural decision for the developer too as Paniagua recognises one of the most obvious influences of the games striking art design.

“When you see the game, with its colours, it is very Nintendo-ish. The publisher asked us, and offered the chance to make a port for the Nintendo Switch and we thought it was a good idea. They’ve been also saying that this game has some influence in The Legend of Zelda: The Wind Waker, so it was a natural step to go there with Nintendo. ”

In its early portions at least, Rime catches the eye in the way the best in the genre do. It’s not underselling its originality, but a compliment to say that based on what I’ve played, it stands shoulder to shoulder with games like Journey. It’s a testament to the work Tequila Works are putting into its first game in five years that it is still enticing me with its strange song. The game feels built to invite you in and usher you through the journey it is hiding. A journey I’m keen to take in May.