Nobody believes that I am good at shooting games 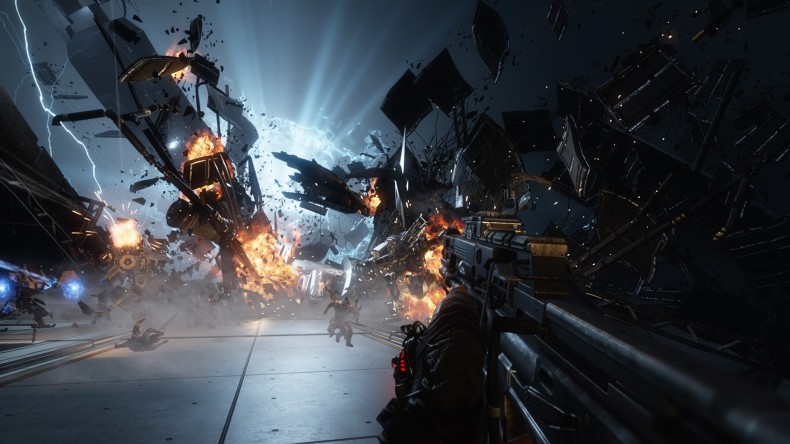 I have a confession to make: I am a lady of a “certain age”, not so old that my usefulness as a woman has passed, but certainly old enough to not want to tell folks how old I am on a regular basis, and I am guessing because of this nobody believes me that I am quite good at shooting stuff in video games.

Now when I say “quite good”, I don’t mean that I am going to be ending up on the pro circuit any time soon, but I am certainly not a hindrance on any team I am placed on. I regularly get more kills than deaths (definitely a plus for Team Deathmatch modes), can attack and defend an objective and generally end up towards the top half of the final results table. In other words, I am a menace.

Despite this clear prowess at firing imaginary rounds at pixel generated avatars, nobody believes me, and I mean nobody. My soon-to-be thirteen year old son, who has watched me decimate players online still thinks he can beat me at 1v1 on Call of Duty (look away games rating board), and when he tells his friends that I play video games a lot they look at him aghast in complete disbelief. I still think that even when they see me playing with my headset on chatting away over the comms that I am a mirage, and all of them believe that they will beat me. They never do. (I want to make a little aside here… I am not in the habit of humiliating young teenagers in video games and the opportunity to do so rarely arises so don’t get the wrong idea!). My husband, who isn’t remotely interested in games still doesn’t get that I actually play online against other people and that I do quite well. He claims that he finds my hobby embarrassing for me, and yet he tells all his friends and other people he meets that I play shooting games a lot with a certain amount of pride. Whenever he does this it is always greeted by an awkward moment of them heartily laughing, saying “yeah, good one pal, whatever mate!” and then me sheepishly confirming that I do indeed play video games, and in particular I like shooting folk online for fun. Even when his small boast is confirmed, they still chuckle and can’t quite believe it. I have spent a fair amount of time showing them clips of my exploits that I post to Twitter where they can hear me cackling with glee at decimating the enemy team, and yet there is still an awkward laugh and the stare of disbelief at me. They still don’t quite believe me, even in the face of the evidence.

My friends who are of a similar age to me and who have boys similar ages to mine frequently post enquiring messages on Facebook. “How is GTAV? Should I be allowing my son to play this game?” (I’d say no!), or “My son wants a new headset for his birthday so he can play online with his friends, has anyone got any good recommendations?” (I do!). “I bought Xbox Live for my son, but it isn’t letting him talk to his friends online” (Check his permissions, and contact Microsoft support if you can’t resolve!), and so on. I often respond to these enquiries with some advice or offer of help, and pretty much without fail I’m ignored in favour of Dave down the street who used to play games, but kids and life and copious amount of beer got in the way. I find it infuriating and a little insulting on occasion. And then there are the commentators on Twitter that without fail crop up whenever I post something about my experiences while shooting stuff in multiplayer. I know a lot of it is good natured “bantz” that doesn’t really bother me, but seen in a wider context of all the other areas where what I do in my spare time is met with incredulity it does start to grate.

I don’t know what it is that makes me such an unbelievable character. I don’t know whether it is my age, or the fact I’m female, or the fact I am a mother, or whether it is all of those things. The thing is, I have always played games so it shouldn’t come as a surprise to those that know me the most, but for some reason it does. Every. Single. Time. Maybe it is the types of games that I play? Most of the time I do play shooters, and it is those games that seem to raise the highest eyebrows, certainly amongst my peers. Having said all this though, I don’t actually care what they think. I love playing video games; I spend most of my free time doing so and if my friends and those that meet me prefer to view me as a curiosity in this regard then so be it. I actually prefer to think that it is those people that are missing out really, because some of the games we are being treated to at the moment are wonderful experiences that should be enjoyed.

Likes to shoot stuff and wear pretty shoes. Is a BEAST at Titanfall.
MORE LIKE THIS
Call of Duty