Seven tips to help you become a great Pathfinder in Mass Effect: Andromeda 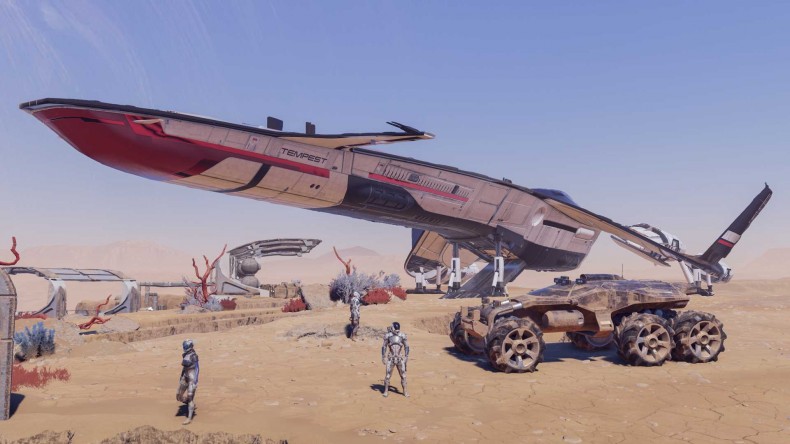 We are having a lot of fun exploring the new Andromeda galaxy in Mass Effect: Andromeda. There is lots to see and do and plenty of new characters to familiarise yourself with, and at the beginning all the information you are presented with can be a little overwhelming to start with. To get you up to speed as quickly as possible so you can spend time exploring the planets that are the focus of the Andromeda initiative, we have put together some handy tips to get you started.

Creating your very own version of Ryder is perhaps the most important step before you even begin your journey. You can choose to go with the default characters if you wish, but part of the fun of Mass Effect is creating your own face that will be with you throughout the entire series.

The tools available to you aren’t as feature rich as in previous games, but there are still plenty of options for you to tinker with. You can choose from a selection of pre-rendered faces, and can then alter specifics from there including the skin tone, eye colour and hairstyle. You can also change the proportions of the features of the face, as well as add things like scars and tattoos as well as make-up for both the male and female characters.

The colour range options for hair and make-up reflect the entire colour spectrum so take some time considering whether you really do want that yellow blusher and blue hair because you are going to be looking at this face for tens of hours!

Once you are done customising your version of Ryder, don’t forget to do the same for his/her twin depending on whether you are playing as male or female. By customising both Scott and Sara you will also influence the way Alec Ryder (the twin’s father) looks too, which is pretty cool. Use your scan tool

Early on in the game you are reminded that your character has an Omni tool on their arm that can scan the surroundings. Once you get out and start exploring the various locales that make up the Andromeda galaxy, it is easy to forget that you have the tool available, so don’t!

Scanning things in the environment like the flora and fauna you find will give you Research Data points; a currency that will enable you to craft better equipment and weapons. You can spend these points at specific terminals on the outposts you create, and there is a static terminal always available to you on the Tempest – Ryder’s version of the Normandy.

Mining for minerals has been a staple of the series for some time and in Andromeda you are going to need to do your fair share of it, as all that research you are doing for new gear and weapons will require mineral resources to build.

There are a variety of ways that you can collect resources; you can scan and manually pick them up from the environment as you are roaming the planet, you can scan and launch probes onto planets via the galaxy map to strip them of their natural resources in much the same way as you could in Mass Effect 2, and you can also deploy mining probes directly from your all terrain vehicle, the Nomad.

SAM the on-board AI will notify you (perhaps a little too often at times) that you are in a mineral rich area whilst in your Nomad, and you can open your mining interface whilst driving. You will then get a visual reading of what, when and where is best to deploy your probe through a small graph type interface that highlights the presence of certain minerals.

Collection is automatic and your stock will be available to you in your Research and Development interface on the Tempest. Mass Effect has always been a very action-orientated RPG and Andromeda is no different, in fact the combat has received a major upheaval and it is by far the best the series has to offer.

You will still be required to pop in and out of cover and in most encounters there is plenty of handily placed chest high items that work perfectly as cover. To duck behind one all you need to do is have your weapon drawn and you will automatically lock into the cover.

The combat isn’t just a pop and lock style though; you are equipped with a jump pack to give you a temporary boost in height, and if you aim whilst jumping you will hover briefly in the air. You also have an incredibly useful dash evade manoeuvre that can be utilised to get into the action quickly, deliver a crushing melee attack with your omni-tool and then a quick jump dash back out to safety.

The enemy AI in Andromeda is quite smart as well, so be aware, as they will flank and deploy behind you so be constantly on the move.

Unlike previous Mass Effect games you are not tied into a certain specialism that you choose at the beginning that will define the tech and biotics, and dictate which weapons you are most proficient in. Instead you can equip profiles once you have unlocked a certain number of skills that define each one.

So, for example you can take the charge power of the Vanguard class and pair it with the singularity of a pure Biotic class. Alternatively, you could take incinerate to help reduce armour and overload for shields as well as putting more passive points into assault rifles to give you more accuracy. Furthermore, you can change your profile preference on the fly which will give boosts specific to that class type and even set up favourites to utilise in specific situations.

You don’t have the power wheel to control which powers your squad companions utilise and when so it will be interesting to see how the metagame of profile set up and squad composition will come into play on higher difficulty levels, as people get more familiar with the game, but for now we suggest experimenting with a few combinations and find what works best for you, remembering you have a lot of flexibility if something isn’t working. Don’t spend too much time on Nexus at the start

As with all Bioware games there is a lot of dialogue and certainly at the beginning there is a great deal of conversation and exposition to get through. If you want to spend time going through this, then that is your prerogative, but our advice is to get a quick overview, speak to the key players on the Nexus and get out as soon as possible so you can start the game proper, meeting your crew and uncovering the mysteries that each planet has to offer.

The Nexus is the Andromeda Initiative’s central hub for colonial affairs; a sprawling space station with lots of characters and quests to interact with. It’s tempting at first to spend a lot of time wandering about trying to understand the layout and talking to the various NPCs to get a sense of what has been happening with the initiative, but our advice is don’t get too bogged down in all that as there is plenty of time to catch up on all the internal politics and in-fighting after you have got a few key missions under your belt.

If you are looking to really expand your Mass Effect knowledge so that you can show off to all your friends in the pub that you are deeply familiar with the genesis of the Genophage, and the stages to reaching N7 designation then the codex is your friend. It is packed full of additional data to flesh out the alien races, their cultures and beliefs as well as the galactic hierarchical structure for each Milky Way species, as well as a tonne of other information about the Andromeda Initiative.

It is constantly updated as well each time you make a new discovery or a conversation reveals further information on a topic, so spend some time going through it as it really fleshes out the universe.

So that’s it, our seven tips for the first few hours in the Andromeda galaxy. We’ll likely have some suggestions on how to best tackle the multiplayer element once we have had a bit more time to play around with it, but for now just get out there and see what the Heleus cluster has to offer.

Likes to shoot stuff and wear pretty shoes. Is a BEAST at Titanfall.
MORE LIKE THIS
mass effect andromedatips

Seven tips for mastering the multiplayer in Mass Effect: Andromeda