Tekken 7 is all about the art of rage, a promising story, and the return of Paul’s hair 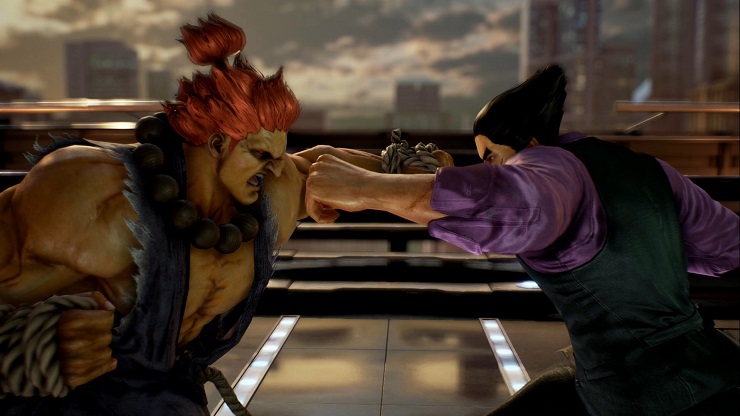 Hands up if you know the Tekken storyline in full. Anyone? No, stop pretending. Hands up if you genuinely know why bears, ninjas, and robot girls have come together to fight each other. And just saying “because King of the Iron Fist tournament!” isn’t enough.

If you know the Tekken storyline in full, close Wikipedia. That’s cheating. Because let’s be honest, no-one really knows what the Tekken story is. As one of the longest-running series in gaming – seriously, this started back in 1994, back when I had hair and vague dreams of a happy life – what we have learnt about Tekken is mostly through cultural osmosis. Law is good. Kazuya is bad. Paul has stupid hair. So does Heihachi. Does anything else really matter? After all, it’s a game where two people hit each other until one of them can’t stand up anymore. This isn’t One Hundred Years of Solitude. It’s Tekken, a game where a break-dancing Brazilian fights a fat man called Bob.

But credit where credit is due – Tekken 7 has a semi-serious attempt at getting you to take the story of the series semi-seriously.

The main thrust of the story is Heihachi returning to Mishima Zaibatsu, following Jin’s disappearance in the Middle East. After taking back control (wait…) of Mishima Zaibatsu, Heihachi immediately steps up its long-running battle against G Corp. In the meantime, there’s an unnamed reporter narrating events while revenge is on his mind, Nina begrudgingly works with Heihachi and Lee Chaolan fills us in on plot detail. The big question – will you care about the story? Probably not. This isn’t a thrilling drama that reaches into the dark depths of your soul with its grimy hands, stirring whatever emotions reside there. The most emotional you’ll get is maybe a slight smirk, or perhaps you’ll reply “lol” on WhatsApp when someone references a funny cutscene in the story.

But what’s fun is how the developers use the story to break up the gameplay, so it doesn’t feel like a checklist of 1-vs-1 fights until the final boss shows up. In what I played, there were some QTE events, a strange mini-game where you’re shooting at soldiers with Lars, and scenarios that pit you against a string of four or five opponents without time to relax or get your health back.

It even has throwbacks to earlier Tekken games. You start the story playing as young Kazuya, reliving the moment Heihachi throws him off a cliff. Later on, you’ll get to experience Tekken 5’s opening cutscene showing Kazuya and Heihachi battling an army of Jack-5 robots, as it seamlessly transitions into you playing as Kazuya. Then there’s the battle against Akuma, the surprise guest for Tekken 7. No spoilers here for how he’s introduced or why but Akuma vs Heihachi seems to be an early anchor point for the story, and it’s also when the difficulty noticeably ramps up.

NetherRealm Studios has set the standard for story modes with Mortal Kombat and Injustice, both games managing to weave varied and interesting scenarios into its plot. On the other end of the scale is Street Fighter 5, the bumbling fool that scratched its head and realised it forgot to include a story mode at all.

Tekken 7 looks like it will tilt towards the Mortal Kombat and Injustice side of the scale, but it’s hard to say whether this will be a gripping story mode yet, in terms of plot or gameplay. Few fighting games are, so fingers crossed this offers meaty single-player content for its story mode at least. TEKKEN 7 – THE OTHER STUFF THAT ISN’T STORY MODE

Outside of that, Tekken 7 also sports a VR mode. And by ‘VR mode’ we mean ‘training mode while wearing a VR headset’. It’s not something you’d sink a lot of time into, with a few adjustable camera options and an odd space-like background giving it more of a tech demo vibe than something fully fleshed out.

It’s missing a first-person VR viewpoint or maybe my stupid sausage fingers couldn’t find it. But given you adjusted the camera in VR mode by literally pressing the right analogue stick in different directions, it seems unlikely. If I’m wrong, I hearby tender my resignation from playing any fighting games ever again and will just stick to Mario Kart. With steering assist. Against children.

As for the game itself, Tekken 7 has been in the wild in Japanese and Korean arcades since March 2015, so we know what to expect by this point.

The bound combo system has gone, so the combo system feels streamlined and fair (you won’t be caught in a combo for ages, one of the few complaints levelled at Tekken Tag Tournament 2 by casual players). The Rage system remains, so you benefit from an increase in attack strength when your health dips below a certain point. The main new addition is Rage Arts, which are essentially the same as ‘Supers’ from 2D fighting games. You can trade your ‘Rage’ in exchange for a powerful move that launches into an attack cinematic if it connects. It’s the sort of thing that morons will call cheap because they won’t learn to 1) stop mindlessly bashing buttons when their opponent has Rage or 2) block.

Honestly. Wait and see how many reviews in the first week call Rage Arts ‘cheap’. It’ll be at least 10. Bookmark this page and come back. You’ll see.

Otherwise, it’s Tekken – a game with bears, ninjas, and robot girls. Story mode is looking good but there are plenty of questions left. Will the balance hold up? Will there be enough extras to keep console players happy? Will the online be smooth enough for a healthy multiplayer scene? Will the customisation options keep everyone happy? Will anyone be able to pull off Paul’s hair convincingly in cosplay?

The answers will come when Tekken 7 is finally released on June 2.