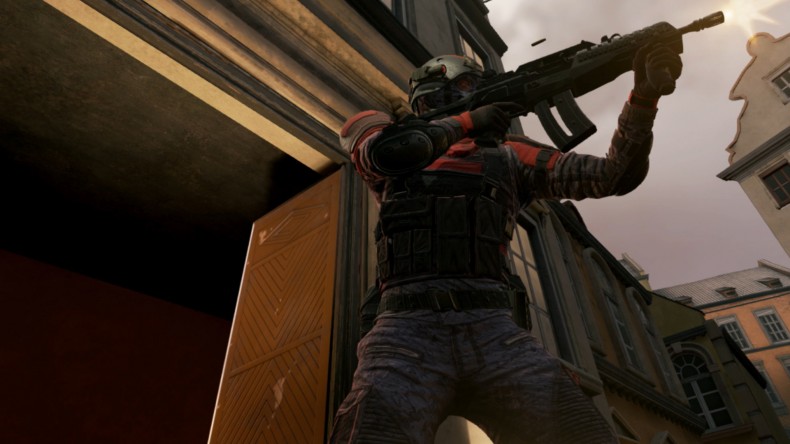 Bravo Team is a first-person, point-to-point, cover-based shooter for PSVR from Supermassive Games, who have already cut their VR teeth on titles like Tumble VR and Until Dawn: Rush of Blood.

Set in a nondescript Eastern European city after the assassination of that country’s President, Bravo Team is a one to two player shooter that relies on teamwork, strategic cover, and a slow march forward through each level.

In the 15-minute demo I played at E3, my partner and I moved from one ruined car to another along an embattled bridge, armed only with an assault rifle and a handgun. The game uses the recently released PSVR Aim controller, so far available only as a bundle with Farpoint. Although the peripheral is difficult to locate in stores now, I imagine Sony will try to keep restocking the device to saturate the market going forward.

As a cover-based shooter, Bravo Team is designed for players to start in a sitting position. This allows them to pop up from whatever couch or chair they’re sitting on in order to peak out from behind car doors and other cover points. This action can also be accomplished through a button press for lazy players.

Unfortunately, the PSVR camera wasn’t set up for the show floor and every time I stood up the game claimed I was out of the bounds of play. This is probably because it was calibrated for somebody shorter than I was. In any case, I had to crouch only slightly above my chair to stand up out of cover, which was pretty uncomfortable. I also had trouble with my Aim controller drifting on the screen during play. I had to keep shaking it to reset it, something players of Farpoint are probably used to by now. Again, I have to imagine the conditions of the E3 show floor are not ideal for PSVR games, so I don’t want to jump to conclusions about how Bravo Team will play in a controlled home environment.

After getting over these technical hurdles, I settled into the experience.

Bravo Team handles traversal by having designated points, identified through a floating blue shield icon, where players can travel. To scramble from behind one car to another, player have to locate a shield icon and hit X on the Aim controller. Oddly, when moving from one point to another, the camera shifts to a third person perspective, which is a point-of-view shift that is disorienting in VR.

Bravo Team’s lead designer, Keith Linares, walked us through the demo. When I asked Linares about the choice to use third person while traveling between cover points, he explained the team’s decision-making process.

“We really wanted to give a more strategic, deliberate feel to movement,” says Linares. “And the other thing is, because the game is coop primarily, we’re excited about the fact that you’re quite exposed when you’re running from point to point. You need your buddy to cover you.”

With limited movement options, the core of the game is found in the gunplay. Luckily, the shooting felt solid, my issues with the Aim controller calibrations aside. Unlike some games, Bravo Team limits ammunition for the more effective assault rifle. This meant that I had to resort to my handgun twice during the short demo before finding ammo pickups, which are located intermittently along the bridge. On the one hand, the lack of ammo felt restrictive. On the other hand, it also increased the intensity of the firefight.

I was disappointed that the enemy A.I. did not seem very impressive. The generic terrorists, hooded in balaclavas, ran between cover points without care and would pop out to fire at my partner and I, sometimes aggressively, sometimes recklessly. However, sometimes the enemies left themselves totally exposed, or they would run between cover even as we were in the middle of firing on them.

The result was an experience that was mildly challenging but never chaotic. As long as we hunkered down behind cover when we started to take damage, the enemy would wait for us to resume play. In this way, Bravo Team rewards patience and precision rather than irresponsible trigger-fingers. The game largely succeeds in giving players a feeling of immersion. The use of the Aim controller helps a great deal here, as does allowing the player to literally stand up to pop out of cover. Yet a few decisions briefly took me out of the experience.

The first was the previously mentioned shift to a third person perspective when traveling between cover points.

“We found it was a really good way to work to the strength of VR,” Linares says, justifying the decision. “Also, you spend a lot of time hunched in cover. Giving you that extra space and time to look around, to see the wider view of the world actually really helps people orient themselves.”

The other immersion-breaking aspect was the reload animation. When I reloaded, my virtual arms reloaded the weapon, but my actual arms did nothing. In real life, I had only pressed a button. Other games have gestural reloading. Bravo Team might solve this problem by changing the reload command to holding a button and lowering the Aim controller to the player’s waist, for example, or some other movement that allows players to do the thing they are seeing in the game. Right now, I experienced a moment of bodily awareness everytime I reloaded.

When released, Bravo Team will concentrate on its cooperative campaign rather than other modes of play, such as challenge levels.

“We’re really focused on delivering the absolute best coop experience we can,” says Linares. “So, we’re just putting everything we’ve got into making that a stellar experience.”

While just a slice of the full game, which is supposed to be between three and four hours, Bravo Team still promises to be an engaging first-person, cover-based shooter either solo or with a friend. Despite only having the assault rifle and handgun in the demo, Linares promises that the game will feature a variety of weapons and the team is working hard to make each one feel distinct.

However, after the full locomotion of Farpoint, it’s difficult to go back to such restrictive point-to-point movement. I felt chained down at all times when all I wanted to do was have the freedom to move where I wanted when I wanted.