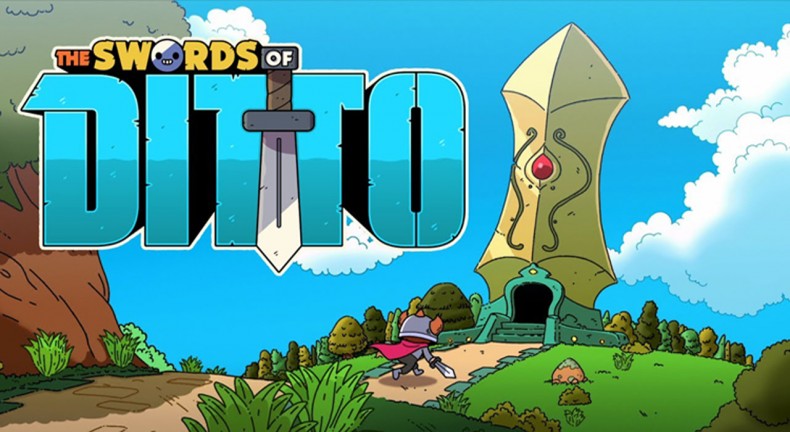 The Swords of Ditto is a cartoonish action RPG from indie studio onebitbeyond with an adventure that spans generations.

The Swords of Ditto has a basic premise: save the world as the hero wielding the legendary sword of Ditto. This involves exploring and fighting across a colorful 2D world, seen from the overhead perspective. Players can use sword combat and a slew of alternative weapons, including bombs and the ability to summon giant monster feet from the sky to squash enemies. The game has complex and interactive systems between sub-weapons. For instance, players can combine fire with the razor Frisbee to create a spinning disk of fire. Likewise, they can set a field of bushes on fire using a well-placed bomb.

In addition to sub-weapons, players can also find and equip stickers that add or increase certain abilities. For instance, one sticker might allow players to perform a dash attack. Another might increase their health bar.

The main goal for players is to climb an incredibly high tower in the center of the world and defeat the evil force of Mormo. With visuals that harken back to The Legend of Zelda: A Link to the Past, it’s a basic game idea that’s aesthetically pleasing.

But there’s a catch.

Whether players successfully climb the tower and defeat Mormo or perish during their initial adventure, the game picks up again hundreds of years later and players take on the role of a new hero. If players were successful, players will hear people speak about the legendary hero. If players failed in their previous life, the world will have been slightly corrupted by the evil that has reigned unchallenged for decades. In this way, if players die repeatedly, the world will grow increasingly twisted and corrupt.

“We’re taking a lot of the things you see in games like Zelda and compressing them down so they don’t last 20 hours but instead last about two hours,” says the game’s designer Jonathan Biddle, former design director of Curve Digital. At the beginning of each generation, players acquire the legendary sword of Ditto either from its shrine in the central city or at the gravesite of the previously defeated hero. Once acquired, players can begin their quest. Each iteration of the world is randomly generated and changes based on the actions of past heroes. The game looks a lot like an interactive cartoon.

“We put so much character into the world,” says Biddle. “It’s just a warm place to be.”

The game includes several varieties of dungeons. There is the central tower of Mormo, story-centric dungeons, mini-dungeons that offer loot, and challenge dungeons that task players with clearing floors of an ever-descending pit.

“This game is a combination of all the stuff we’ve done over the years,” says Biddle. “It’s got the puzzle stuff from our time working with Nintendo and the combat from other games we’ve done.”

Biddle and his former team at Curve Digital used to work closely with Nintendo. It is from Nintendo, he says, where he learned the fundamentals of puzzle design. And it shows. The puzzles in the dungeons are very Zelda-like. One in particular involved using the Frisbee to transfer fire to torches all around a room in order to unlock the door to the next area. Walls separated the torches and we had to throw the Frisbee through holes in the wall and figure out the right sequence of tosses to distribute the fire to every torchlight.

To sweeten the deal, the game offers robust local cooperative play. I played through only a fraction of the game’s first generation of hero alongside Biddle as he explained the game’s mechanics and core ideas. With potentially dozens and dozens, if not endless, generations, The Swords of Ditto promises players plenty of engaging content.