previous
Kalimba jumps onto iOS on Thursday
random
next
Competition: Win a copy of The Town of Light and Victor Vran on the platform of your choice
0 comments 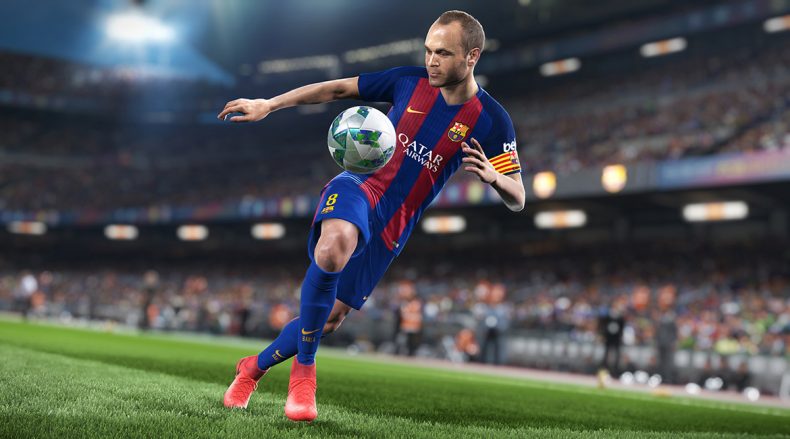 Sometimes it’s good to give a franchise a break. Sometimes, we get so used to a series of games we never really notice the big differences they make, looking at them more of nuances than revolutions. Knowing that this preview is about PES 2018, you’re probably waiting for me to say how this applies to my impressions of it. Well, it doesn’t. Not to PES. Even though Konami release annually, their changes are so abundantly clear you can’t help but appreciate that, and once again, the latest entry in the football series takes further steps in advancing the technology at the heart of it.

I headed to Anfield recently to play Pro Evolution Soccer 2018, or as the cool kids say, PES 18. I had to sit down for a few hours and play as much of it as I could (it’s a tough life, but it’s just something I had to do) and give you, the people, a fair analysis of the good and the bad of what I saw. Where FIFA 18 is building on the big changes from last year seems to be relying more on how it looks than the gameplay, PES 2018 has ticked both off the list. Playing on a PS4 Pro, I couldn’t help but notice how gorgeous it looks, both in the attention to detail and how smooth gameplay is. The nuances in control and gameplay, and the general synchronicity of the movement of the players, the cheers of the fans, and the lighting within the grounds. Anyway, let’s start at the beginning. You can make sure you’ve got every hair on Pogba’s head in the correct place, or the dimples on Ronaldo’s face particularly dimpley, but if the beautiful game isn’t beautiful, you might as well give up now. From kick off, PES 2018 plays so well. Passing connects like never has before, and you have much more control on the ball. AI has been improved, allowing players to make better space on not remain too close to the opposition. Shooting is also a lot better, with better direction when making your shot. The amount of shots you get may be significantly reduced than last year for certain players, as the game in PES 2018 feels much slower. When PES 2017 was released, it was clear Konami had gone for a more simulation approach, whilst keeping hold of the fluidity of past iterations.

With PES 2018, players don’t feel heavy, or clunky even, but they do seem to have been slowed down a bit. You may see this as a negative, but it’s hard to tell with only playing a few hours. It’s good at times, because you feel like you have more time to breathe after weathering the opposition’s attack, and when you’re meddling about in midfield, you have more time to work out a method of attack. On the other hand, there are moments when your reactions don’t seem to take full effect, such as when reacting to a keeper’s save and you’re retaliating with a tap in or volley – you may not always get the result you want.

Goalkeepers are still a bit of a problem, but there are definite improvements. In my first match, my keeper did a ridiculous dive for such a lofty shot travelling at a snail’s pace. He knocked it away with his fists, only for the opposition to get a better shot on goal. With Barcelona, I managed to score a goal from far outside the box with Busquets; the keeper was miles away, and it seemed unnecessary. When the keepers are on it though, they are on it. As I was beating ex-GodisaGeek video production dude Colm Ahern, I couldn’t help but notice there’s clearly improvements in their reactions. There’s an acknowledgement of player feedback from last year, and this is one of the things that has changed for the better. PES 2018 has improved the way players look whilst playing, and matches at the Nou Camp are practically the same as watching them on the TV. For me, though, these aren’t the best improvements to the way it looks. The transition from in-game to what happens after a shot or a foul is smooth as silk, and in those animations PES 2018 outdoes last year by a long way. Neymar grimaced as he put the ball inches wide, and I saw the frown marks on Mané as he clipped Torres just outside the box. The FOX engine has given Konami one of the best weapons in the business, and it has never been more evident than in PES 2018. After a win, it’s as if a camera man is walking around the pitch, focusing on two players shaking hands or hugging, turning full circle and watching the fans celebrate in the peripheral as Coutinho and Can share an embrace after beating Dortmund.

I believe PES 2018 will be the better of the two football games, and I also believe it’ll be one of the best games of the year. Not only has it made significant improvements to last year, it’s evident Konami has listened, and are prepared to work damn hard to make this year’s entry its best yet. I just hope the niggles I have don’t feel as formidable the more you play, or at least, by the time game is finally released. The passing, shooting, and movement has all improved, and visuals are far beyond anything I’ve seen before in a footie game. I can’t wait to see the final product, and if it’s anything like this, the world better be prepared to have its football socks well and truly blown off.

Video games are cool. Don't let anybody tell you any different.
MORE LIKE THIS
Konamipes 2018