Matterfall gives players control of the world around them 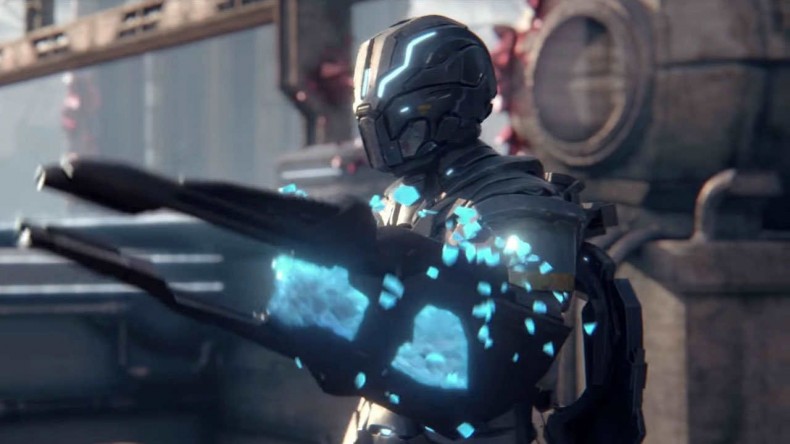 Players control a sleek, armored hero as they dash and shoot through futuristic levels populated by cybernetic and insectoid enemies.

As the title implies, Matterfall’s hook is the ability to manipulate certain matter in the environment. Players can freeze enemies, manifest platforms, and phase through enemy fire and objects, among other actions.

The developers design the enemy encounters and environmental obstacles to create a particular rhythm to the gameplay. For instance, players can dash through a wall of bullets into an enemy, freezing the enemy, fire a grenade to finish the enemy off, and double jump through an transparent floor before solidifying the floor underneath their feet in one fluid action.

Along with the game’s pulsating electronic score, there is a certain rapid yet consistent momentum that the game encourages.

In a peculiar choice, the controls lean heavily on the four shoulder buttons of the DualShock 4. Through these, players will jump, phase through matter, absorb and manipulate matter, and fire secondary weapons like grenade launchers. Standard shooting is handled in a traditional way using the right thumbstick, which means players can shoot in all directions. It’s an odd control scheme that takes several minutes with which to get comfortable. Even by the end of my demo time, which consisted of two levels and one boss fight, I found myself having to think about which buttons to press to do which actions.

At this point, with titles like Resogun, Dead Nation, and Alien Nation under their belts, Housemarque has a distinct style to their shooting games. It’s aggressive and busy, but offers players the abilities to almost dance through the chaos.

Matterfall will launch on the PS4 on August 15.

A media scholar who also writes about video games for various outlets. He's interested in digital game production, media industries, residual media, and discourses around gender, race, and sexuality in media and production cultures.
MORE LIKE THIS
e3 2017matterfall