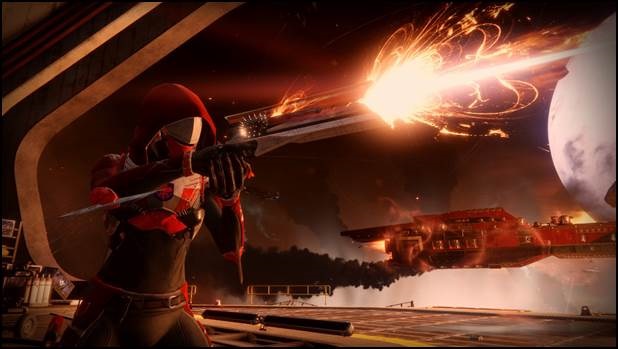 People who pre-ordered have received codes to access the beta starting today – tomorrow for Xbox One owners – and it goes live at 6pm UK time. It’ll run until July 21, at which point the beta will be open for everyone to play up until the July 23. There’s a considerable amount of stuff to do in this beta as well.

You’ll be able to play the game’s opening mission Homecoming as the Cabal forces invade the Tower and reduce it to rubble, you’ll also be able to take on the three-player strike Inverted Spire.

There’ll also be two competitive multiplayer modes to try out, both in the new 4v4 format. There’s the classic control where you fight to control points across the map, and also a new mode Countdown, which sees one team trying to plant a bomb at the enemy’s base and guard it until it explodes, at which point the teams swap objectives. You’ll be playing those on two new maps, the Endless Vale, and Midtown.

Of course the three classes will have both their subclasses available, Dawnblade and Voidwalker for Warlocks, Sentinel and Striker for Titans and Arcstrider and Gunslinger for Hunters. In addition to this Bungie have made twenty weapons available which include three exotics – Sweet Business, Sunshot and Risk Runner – as well as three armour sets for each class.

Oh, and there are a few dance emotes as well.

I hope to see you on tonight everyone.

A lover, not a fighter and an all round good guy (he would say that, he wrote this after all), he's happy to be here as part of GIAG.
MORE LIKE THIS
Activision-BlizzardBungieDestinyDestiny 2