previous
Evil Genius 2 is in development, focussing on PC for now
random
next
Yomawari: Midnight Shadows releases this October
0 comments 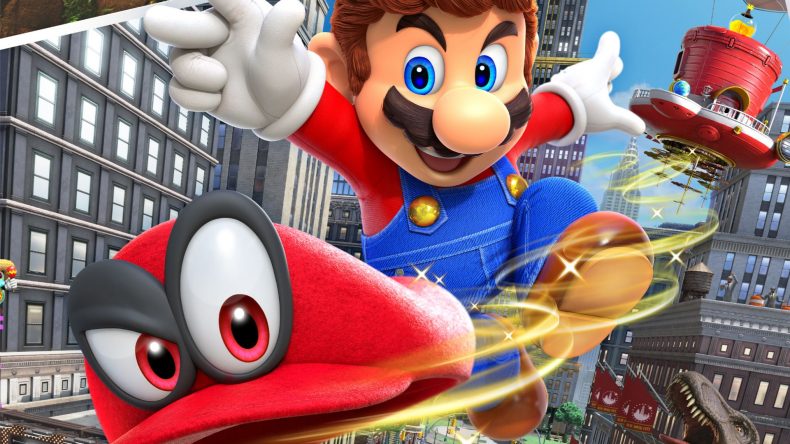 How is throwing a hat the most important and exciting game mechanic of 2017? How?

Look, we get it. We really do. There’s only one scenario where throwing your clothing on the floor is sexy and exciting and that scenario will never make it into a Mario game. But somehow, some way, hat-throwing is exactly what makes Odyssey promises to be a delightful new iteration in the expertly-designed 3D Mario franchise good. Not even good. It’s what makes Super Mario Odyssey bloody brilliant, in a way that throwing hats should never make anything, well, bloody anything. Quick rundown of the basics first: Super Mario Odyssey is a 3D Mario outing, the fat plumber leaping and sprinting around obstacles via his usual physique-defying moves. He can still somersault backwards, long jump, and so on. All the skills you’ve learned in previous games carry over and there are new moves thrown in, such as how Mario can tuck himself into a ball to roll down hills. As is usual for 3D Mario outings, each level is a giant patchwork of clever designs and fun obstacles stitched together, leaving you free to tackle them however you see fit.

The point of Super Mario Odyssey is that you’re collecting Moons, in the same way that you collected Stars in previous games. Some Moons are hiding in plain sight but annoyingly out of reach, forcing you to scout the environment for a way to get close enough to snag them. Others are hidden entirely, rewards for Odyssey players who poke at the outer edges of the level design, smashing the world up as they go.

What ties your Moon-hunting adventure together is the Cappy Hat. This is Mario’s cap-shaped ally that replaces his traditional red hat, and it comes in fedora, sombrero, and other flavours if you collect enough coins to buy them. Cappy Hat can be thrown at coins, crates, enemies, just about everything. You can waggle the Joy Con to make the Cappy Hat bounce off nearby points of interest, using it to quickly clear out areas of collectibles or enemies. The first trick is that you can hold the throw button down, which leaves Cappy Hat spinning on the spot at the furthest point of Mario’s throw. You can use this as an elevated platform that bounces you up into the air and you don’t even need to jump onto it. Run onto your spinning Cappy Hat and it will automatically fling Mario into the air. There are some obstacles that you can only get past by using it this way, somewhat unsurprisingly.

What’s slightly more interesting thing is how you can use Cappy Hat together with Mario’s usual array of leaps and jumps to take shortcuts through each level, bypassing some obstacles entirely. It requires the sort of hand gymnastics that will tie your fingers up like a pretzel, but speedrunners will be drooling at the potential Cappy unlocks. For those who have the skills, Super Mario Odyssey’s world is begging to be conquered with Mario’s hat.

Cappy doesn’t just serve as a portable trampoline. It collects coins, smashes crates, hurts enemies, activates blocks. It’s Mario’s multi-purpose tool for doing just about everything. The really fun stuff comes from Cappy possessing certain enemies or blocks when thrown at them. Bullet Bill patrols the upper platforms of Sand Kingdom but stick Cappy on his shiny dome and you can control him, gliding over to distant platforms and through rings to collect coins. Similarly, Metro Kingdom is connected by wires. Throw Cappy on the glowing point at the start of a wire and you turn into a ball of electricity, fizzing safely to the other side.

Speaking of which, New Donk City! The towering metropolis in Metro Kingdom sees Mario hanging out with humans, which has seen Mario fans spinning off their axis of sanity and tumbling into the Abyss of Stupid. Here are some fan theories as to why this has happened, which I just Googled now, and are ranked in order of stupidity: I’ve ranked ‘Mario isn’t human’ as the least stupid thing there, which says a lot about what a quick Google search (quite literally) threw up, and I suppose you could make an argument that Mario isn’t the same size as the humans, his best friend is a talking mushroom, he comes from a world where his arch-nemesis is a sort of lizard-dragon-tortoise thing with a fetish for princesses, blah blah blah.

Make all the theories up that you want. This all ignores the bigger, more relevant point that New Donk City is the perfect Mario level.

All the enemies in New Donk City are tucked away inside buildings, so there’s no danger preventing you from leaping and exploring to your heart’s content. Its collection of bouncy taxis, traffic light poles and crates make it the perfect arena to practice stringing moves together, as you poke and prod at the level design. It celebrates and highlights Mario’s new arsenal of moves, replacing the tension and skill of fighting enemies with the joy and exhilaration of conquering level design.

Then there’s New Donk City itself. Populated with businessmen and women, musicians and the odd cameo appearance, it feels like two worlds colliding as Mario is brought into modern day. There’s something refreshing about seeing Nintendo’s character bouncing around the tight, busy layout of a sprawling metropolis rather than a broad, open fantasy world of floating platforms and moving blocks. It’s such a seamless fit, it makes you wonder why it’s never happened before. Human or not human, who cares. New Donk City is brilliant.

Not that Sand Kingdom, which is the usual Mario mix of exploration and enemies, is terrible. There are moments of brilliance dotted through its sandy dunes.

One mini-game to snatch back a Moon involves possessing a wandering block wearing shades, which allow you to see invisible blocks connecting floating platforms. You have to remember where they are and switch back to Mario to tackle the invisible puzzle, a nice mix of memorisation and platforming skill.

Another sees Mario entering a wall to play through a 2D throwback to the days of the original Super Mario Bros., smashing through a brick block at the top to re-emerge in the 3D world. Better yet, the pixelated Mario will wear whatever clothes you’re wearing if they match. Wear a fedora and a business suit and so does 2D Mario. Same for a sombrero and poncho combo. That’s the beauty of Super Mario Odyssey, as with all Mario games: it rewards your curiosity in surprising ways, which pushes you to explore further and squeeze as many secrets out of Odyssey as you can.