previous
Multi-Play: PlayerUnknown's Battlegrounds #3 - Murder most horrid
random
next
The Destiny 2 beta is now open to everyone
0 comments 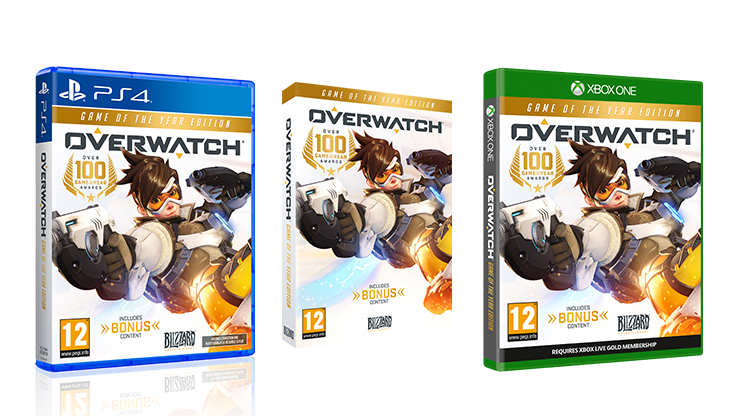 Overwatch: Game of the Year Edition will get a retail release and be available starting July 28.

Overwatch has seen more than 30 million gamers play it over the last year and now the award winning game gets a retail release celebrating more than 100 game of the year awards. The retail edition includes everything from the Origins Edition and 10 extra loot boxes. Here’s the full list of digital goodies:

10 Bonus Overwatch Loot Boxes — Enjoy 10 bonus Loot Boxes, each containing random items that can be used to customize and personalize the appearance of your heroes. Loot Boxes may include skins, emotes, victory poses, voice lines, sprays, and highlight intros, as well as credits you can use to acquire many different customization options.
Overwatch Origins Skins — Pay homage to the original Overwatch strike force by wearing the vintage skins Blackwatch Reyes or Strike-Commander Morrison. Explore other heroes’ origins with Overgrown Bastion, Security Chief Pharah, and Slipstream Tracer!
Diablo III Mercy’s Wings — Slay demonic forces throughout the High Heavens and Burning Hells as you don Mercy’s wings. All of Sanctuary will know of your allegiance to Overwatch!
World of Warcraft Baby Winston Pet — Adorably cuddly and highly intellectual, the Baby Winston pet will be at your side as you fight your way through Azeroth.
Heroes of the Storm Tracer Hero — Jump into the Nexus with Tracer and surprise your enemies in the blink of an eye.
StarCraft II In-game Portraits and a Hearthstone Card Back — With portraits of Tracer, Reaper, Pharah, Winston, Bastion, and Soldier: 76, you’re sure to become a champion of the Koprulu Sector. You can also battle it out in Hearthstone with an Overwatch-themed card back fit for a hero!

No word on whether the disc includes a patched version of the game or the vanilla release that has a lot of patches required to play.

Overwatch: Game of the Year Edition will release for PlayStation 4, Xbox One, and PC from July 28.

Part time writer part time JRPG and indie game enthusiast, Mikhail Madnani spends far too much time listening to video game music on Vinyl like a true hipster from India.
MORE LIKE THIS
Activision-BlizzardblizzardBlizzard EntertainmentOverwatch: game of the year edition