Wolfenstein 2: The New Colossus is a chaotic mix of bullets, aggression, and a chilling world 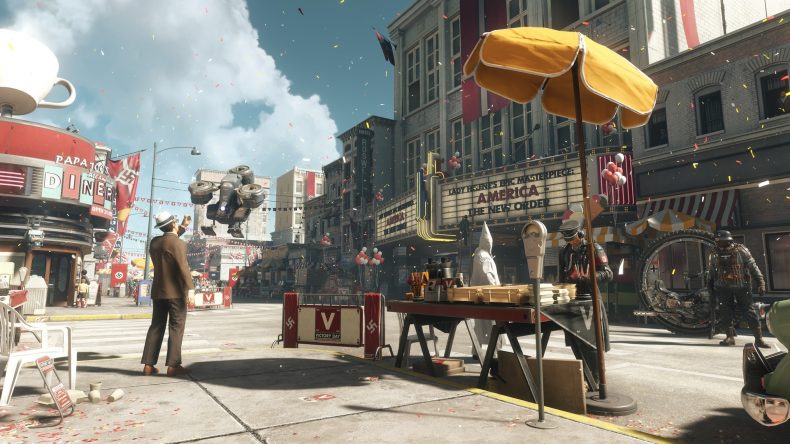 Nazis. Specifically, killing Nazis, is great fun. We’ve been doing it for years; some of my earliest memories are of 2D platformers and killing Nazis. 1981 was the year games got political and chose them as player’s default cannon fodder, their claim to this position was so strong literal demons from hell didn’t come to seriously contest this title until 1993.

However, until the release of Wolfenstein: The New Order, Nazis had been noticeably absent from the pointy end of my gun. I tend to find Nazis thrive the most when they’ve got something dangerous aimed in their general direction, they can never do more good than when they’re seconds away from eating a massive nail through the head. Fortunately, my short session with The New Colossus provided me ample opportunity to do just that very thing. While the new level I played was fundamentally similar to those in its predecessor — we never want to stray too far from the cathartic culling after all — there were some notable subtractions, additions and enhancements that has the potential of trumping both The New Order and its shorter, more refined expansion, The Old Blood. Wolfenstein 2: The New Colossus opens strong with meals-on-wheels B.J Blazkowicz rolling around a submarine, mowing down Nazis as he goes with a bag of his own piss strapped to his leg. Opening a game where the protagonist is as maneuverable (and as deadly) as Robocop does a great job at setting the game’s tone.

The last time we left Blazkowicz he had been drugged, stabbed, blown up and subsequently nuked. Yet here he is, wheeling himself down corridors in nothing more than a bathrobe with a submachine gun resting in his lap. Stopping to reload, you listen to enemies converse with one another in hushed, terrified voices about the awesome deeds of the unstoppable “Terror-Billy”. Unbeknownst to them their proverbial boogeyman is just around the corner preparing to conduct a bizarre, almost comical wheelchair-driveby; using one hand to roll between cover and spraying bullets with the other, be it out of shock alone the hype guys were going to be dropping quickly. It’s as ludicrously fun as it sounds.

For better or worse, the second level I played was a return to normal form. The wheelchair was gone and instead Blazkowicz has donned the power armor found in the previous game. He had been upgraded from a slow moving Alex Murphy and into a dual-wielding Arnie/Adam Jensen esque Doomguy. Info is very light on the ground as to what the power armor will be able to do, but I have hopes from some particularly mad abilities. The dual-wielding mechanic, while not new. has expanded to allow you to pick and choose which weapons you want in either hand. Grenade launcher and pistol? Sniper and shotgun? Pick and choose. This freedom allowed me to pay homage to the fabled Terminator police station scene, but with Nazis. Using the shotgun/assault-rifle combo to blow the limbs off of everyone in my path as I sprinted from one end of a train to the other I’ll admit, did appease that certain lizard part of the brain.

The weapon upgrade system has also seen some drastic changes. Instead of picking up an upgrade from a specific location, you now collect upgrade kits found throughout the game. These kits are a sort of currency that allows you to unlock the upgrade that you desire. A silencer on a pistol, a scope for a rifle etc. Worry not there are more exotic options however; one upgrade I particularly enjoyed was on the submachine gun. It was changed from firing bullets to shooting hot-nails. Slowing the rate of fire as a consequence for more damage was a fair tradeoff for the aforementioned satisfaction. My main gripes with The New Order were few. I found the game’s inability to settle on a tone jarring, the boss battles seemed little more than bullet sponges and being forced to use a laser cutter that, while was a nice concept, offered nothing to the experience aside from consistently killing the pacing. As of yet there is no mention of a laser cutter and the boss I fought was a much more enjoyable and challenging affair. So there exists the possibility that my complaints have been answered.

Probably the biggest improvement that I notice in my playtime was the additional enemies. The more agile and aggressive adversaries I faced forced me to move and adapt more. No place was safe for long. A large heavy armored Nazi, sporting two laser machine guns, was now equipped with a near instant charge ability that could and would knock me onto the ground given a clear and direct path. Keeping something in between myself and him at all times was crucial. All the while more hellish looking soldiers would teleport around, flanking me and driving me from every piece of cover I could find. Combine that with the objective of killing an entrenched commander who insisted on calling in more reinforcements and you’ve got some fast paced madness nearing Doom’s level of chaos. With all that said, at its core it seems like not a lot has changed in The New Colossus, but arguably, not much needed to. Before my homicidal tribute to Arnold Schwarzenegger, I was given the opportunity to wander around a small American town and examine the twisted world that Machine Games had created. A world where I was able to witness a Nazi soldier interact with 2 robed members of the KKK. While the content of the dialogue boiled down to a surprise German test, one that if failed had the potential to lead to mortal consequences. The most chilling thing about the scene was how insignificant it was. It wasn’t the Nazis monstrosity that was most terrifying, it was their humanity. I should mention that during this entire segment, Blazkowicz was lugging around a nuclear bomb disguised as a fire extinguisher. There was definitely some cognitive dissonance there.

It will be interesting to see how they handle the Nazis this time around. If the marketing is anything to go by they seem to be going with a more aggressive almost vindictive approach, using words like cathartic. It’s a view that I am sure, especially in regards to events in recent years, many share and probably even more passionately. We’ve all had a hard reminder that unfortunately ideas never die. At the very least Machine Games have succeeded in pissing off a great number of far right leaning people if the comments in their videos are anything to go by.