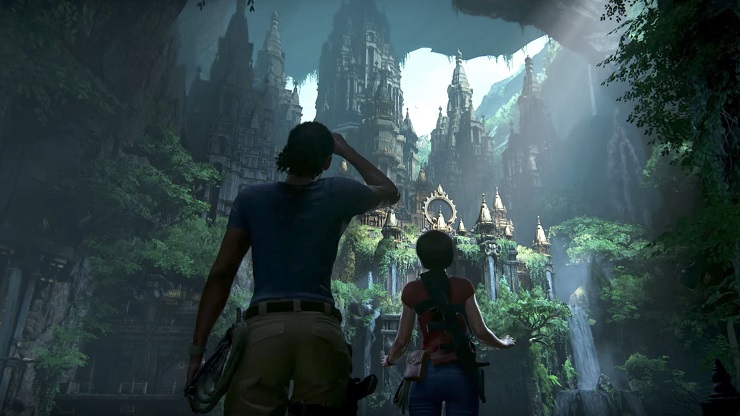 Back in early August, when we previewed Uncharted: The Lost Legacy, we also had a short chat with Creative Director, Shaun Escayg, and Communications Director, Arne Meyer. Given that the game started out as an expansion – as DLC – we were wondering what made the team decide to turn it into a standalone title?

Shaun Escayg: “When we finished Uncharted 4, we knew we were done with the Nathan Drake story and started exploring different story lines. We explored the Sullivan storyline, the Cutter storyline. Sullivan/Cutter, Sam etc. And we landed on Chloe, and Chloe is a fan favourite. Inside the studio we knew very little about Chloe yet everyone loved Chloe so that intrigued us. We thought about, well what if Chloe had her own job, how would she stand to lose, would she preserve, would she be able to go the distance, would she become the hero like Nathan Drake. In exploring that, by the nature of telling that story, it got bigger.so we had to go back into her past we asked “What makes Chloe a self preservationist first?” Maybe it’s related to her father, maybe it’s related to this region and the mythology behind the region, and by exploring that it expanded and grew into The Lost Legacy.

As you’ve chosen Chloe how do you intend to build upon her character? As the new main character are you focusing solely around why she was loved by the community?

Escayg: Not why she’s loved, She was intriguing because, she was mysterious, that’s why she was loved. People knew very little about her and she was a blank canvas for us, so we could tell essentially her origin story if you will and get back into her past, like why she is who she is.”

How did you come to choose Nadine? Is it because they bounce off each other?

Escayg: When we were thinking about it, again we would say: OK, what if we paired her up with Sullivan; what if we paired her up with cutter, and then we landed on Nadine and we thought Nadine Ross would be the best and the worst character to pair Chloe Frazer up with. More importantly than they are just complete opposites. Enigmatic double-dealing hustler Chloe, pragmatic militant leader Nadine Ross, but they both share the common self preservation characteristic. They both bail out when the going gets too tough, so that’s kinda the thing that glues them, what makes them a good pair. Uncharted has always had standout villains, what makes this new guy on the block, Asav, just as good?

Escayg: He is one of the more grounded of our villains, he is very meticulous, very intelligent, very ideological. He is a doctor turned freedom fighter or rebel fighter and he believes in his holy cause of regaining the lands which were ruled by two different schools of thought: the old king’s way, which where the kings that ruled the empire prior to the most recent king, and then the young king’s way which was a more progressive king who outlawed certain practices and rituals that the old kings instilled. So our villain believes that that somehow weakened or diluted the region and he wants to reinstate the old kings governance.

Uncharted fans are very devoted, they love your games. What is the special element in the the games that makes them so devoted? Some say it was all about Drake, that he was what carried the series but this is new, uncharted territory. Do you think you’ve managed to capture that magic again?

Escayg: What I think the fans love about all Naughty Dog‘s games is the way we use narrative and narrative storytelling in gameplay. I think this game goes further with pushing narrative into gameplay and keeping the players submerged in this world as a participant, that’s why our games do so well. I think Lost Legacy is the sum of all the Uncharted-parts, everything you’ve ever loved about Uncharted in one game, we’ve had the 4 previous games to use as a foundation, to pick and choose the particular areas we love the most about the games, enhance them, build upon them and refine them. And now we have a new protagonist to present that story which I think is going to be spectacular So do you feel this new protagonist has given you more creative freedom? like you said you can pick and choose, so you feel less tied down now?

Escayg: Yes, the way we approach our games are essentially built around the characters. The lockpicking mechanic for example is one way of enhancing Chloe’s character as the thief, as the hustler. We usually build and put mechanics in there we feel support the character or narrative. The open world space, which is the largest open world nonlinear space in Uncharted is also a part of bringing back the mystery and the sense of discovery that the player and the characters are discovering together at the same time. You don’t know where you are going you just gotta find these symbols. And in doing so you learn some stuff about the characters the narrative, who they are as well as keep what people loved about Uncharted, the discovery elements.

You say the lockpicking mechanic is to help build Chloe’s character, does that mean Nadine has any special abilities for the same effect?

Escayg: Well, we focused more on Chloe in this particular game, but there are some traits of Nadine that you learn about that may set up future Uncharted’s.

So future Uncharted games, then?

Meyer: When we are talking about Nadine and how we focus on the AI between them in combat situations is that Nadine is a professional soldier basically. So when you see her melee moves you’ll notice that there’s a confidence behind them, in terms of flanking in terms of what she says, for it. When you look at the E3 demo there was that part, that we sort of played around with the idea that Chloe goes you take left and I’ll take right and then Nadine just takes both of them out. So the idea is that Nadine is capable in combat. Escayg: Well the relationship is uneasy. They all know of each other, they all know of their pasts, Nadine is aware that Chloe is a double dealing hustler while Chloe is aware that Nadine is a ruthless militant leader of Shoreline. There is an uneasiness between them, they can’t trust each other and they both will bail. So there relationship is this, “will they make it” type thing.

What feedback have you taken to heart from the last game? For example, in the presentation you talked about puzzles and how they differ from Uncharted 4, can you elaborate a bit more on that?

Escayg: Yes, so the puzzles are integrated better into the narrative. What the region gave to us especially, is really awesome context. Southern India is steeped in mysticism, mythology, Hinduism – all about the region’s people, their reign, the 11 kings, so there’s a lot of room for us to play on that information to build our puzzles. So the puzzles have meaning, they have a little more context within the story. We also brought back scale. That’s one of the big things that we loved about the early Uncharted games, that there are these huge archaeological ruins and sites that you get to actually climb and traverse and witness from different perspectives. Bringing back the sense of discovery the sense of scale, integrating our puzzles into the history of the region and of course building the characters narrative into gameplay. One of the big things that we say we’ve done the most of, is if the characters are not getting along in their arc, you will find gameplay very difficult. Characters may abandon you if they are working well together you might be able to asses the situation and have a fairly easy time or enjoyable combat lets say. It’s all based on where the characters are in their arc.

Meyer: There was no specific point of feedback that we were internalising in terms of how we are looking at our games. Having played through it one of the things we did focus on is the the moment to moment pacing, trying to make it a lot tighter, trying to make the rhythm very satisfying, so we really paid attention to the highs and lows and how it all fits together.

You’ve mentioned photo mode today, is this a where-ever when-ever kind of deal or is there specific points the player has to use?

Escayg: Theres “photo mode” and then theres “photo ops” which is the coined term. The photo mode is still there there are also photo ops inside the world where you would see hints to take awesome photos and have a library of your visit, of different locations and you’ll have them all on your (ingame) phone.

Meyer: Sometimes there could be a big vista or somewhere you would naturally think would be a good location for a photo and there is actually an opportunity Chloe will just take out her phone for a quick photo.

Will Chloe and Nadine be together for their entire adventure? Because based on what you are saying if Nadine jumped out of the scene that would change the gameplay quite a bit.

Escayg: Maybe she will stick around, that’s the big question, it’s all based on the relationship. These characters bond, but they can splinter as well. It’s a constant journey throughout the game where they are building and learning off of each other and it’s going to be a bumpy road though.

Uncharted: The Lost Legacy is out on August 22 for PS4. Buy from this link to support GodisaGeek.