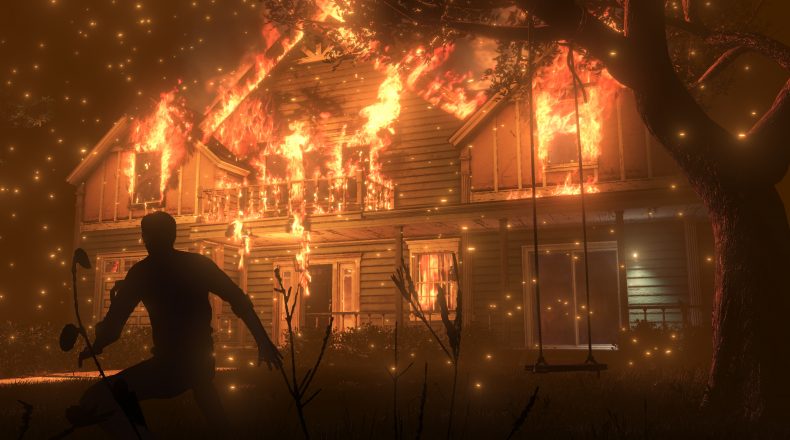 I didn’t want to play The Evil Within 2. Horror is 100% not my thing, and the only horror game I have really ever played is Until Dawn, which is great BTW. Even the not quite horror but still a little horror stuff like Resident Evil I rarely play, in fact I’ve only played Resi 5, which is undoubtedly the best one, and that was all in co op. Basically I don’t like horror that much.

So I was apprehensive when I picked up the controler to play The Evil Within 2, and was immediately dropped into some weird room that just had what I hope to be mannequins, but could easily have been bodies, hanging from the ceiling via ropes. There wasn’t a jump scare or anything like that, it was just kind of weird and unsettling. As I wandered through the bodies hanging at eye level, occasionally bumping into them, I had no idea what to do. There was no prompts on where to go or what I needed to interact with. I thought I got disorientated, and then from nowhere a door appeared and I was convinced it hadn’t been there the whole time.

For those that played the first game, or really know anything about The Evil Within you are probably laughing at me right now. Of course the door wasn’t there, that is like the whole point of this area. Things pop up out of site that you need, corridors you just walked down change totally when your back is turned and rooms will change layout when you’re not looking. But I didn’t have a clue about this until at least 40 minutes further into the demo when I figured it out. I was pleased to discover that, the portion that I played at least, focused more on these psychological shenanigans and general “WTF is this all about” moments than jump scares and things that might make you have an accident. There was one half jump scare that I pretty much expected and that was basically it. It was still creepy, and some of the things shown were pretty grim, but it didn’t seem to be something that would make you jump out of your chair and throw a controller through the screen to make it go away.

The most interesting bit by far was when what appears to be the big bad guy, who is all about taking pictures with an old timey camera, had seemingly lured me to a big old mansion. After a bit of exploring I stumbled upon an old timey camera with a mannequin and a table with a vase on it. I tried to take the picture but nothing happened. A bit of exploring revealed that I needed to turn the mannequin around and put some flowers in the vase, and after that the picture worked. As that happened the backdrop of a corridor, which was just a painted sheet, became a real corridor I could walk down. After being instructed to look at the disturbing art on the walls, the corridor behind me would shift to a new layout. This whole sequence went on for a while, with many twists and turns trying to unsettle the player in a variety of ways. This was the most entertaining bit of the demo, purely because I had to ask myself what the fuck was going on almost every second. At times it even confused me as I though layouts had been changed, but they actually remained the same and I was just being an idiot. If the whole thing is like that then I am well and truly up for it. It was great.

However, I fear that areas such as that will be few and far between. The main portion of my demo involved trying to track the signal of a little girl who was lost. This signal had me running all over town and then to another location and another after that. It was pretty slow going, but that was probably down to me trying to stealth everything. When exploring the fairly open environments you can just run in and shoot everything, but with limited ammo and a lot of enemies that maybe isn’t the best idea. You can stealth kill if you get into close range, but for the most part I went full stealth with no detection and no kills. This meant hiding in a lot of bushes. This perhaps isn’t the ideal way to play, but I found it pretty entertaining, only pulling out my weapon when an enemy cornered me.

The combat clearly is not the star here, while the weapons feel different and some of them are pretty powerful, a lot of the time the combat felt a little tiresome, especially when multiple enemies are on top of you and the annoying auto aim, which can be turned off to be fair, decides to aim your weapon at the worst target possible. The easy difficulty mode may have been a factor in this, as no enemy felt really challenging, only requiring a few shots to bring them down. For me The Evil Within 2 can go one of two ways. If the majority of it is running round fairly open areas chasing after people and signals, which was what took up a good chunk of my demo, then maybe it won’t be amazing. But if there is a lot more of the mind bending psychological thriller activities then this could be something truly special, as that is where it really shined.

But what I really took away from this is that at the start of the day I didn’t really fancy playing The Evil Within 2, for a variety of reasons. But after around 90 minutes with it I now just want to play more of it, and you can be sure that it has now shot to the top of my list of games I want to play this year. That, I think, should tell you quite a bit about how much potential this has.

eSports! I joined God is a Geek all the way back in September 2013 and since then have spent most of my time on Dota 2, and occasionally posting the odd review, news article or totally wrong predictions for The International. When I am not playing Dota I can probably be seen watching some kind of strange eSport or begging for more Twitter followers (@MikeStubbsy if you are interested). Aside from GiaG I am a computing student, football coach and major Apple fanboy.
MORE LIKE THIS
bethesdathe evil within 2