Microtransactions and more: Am I part of the problem? 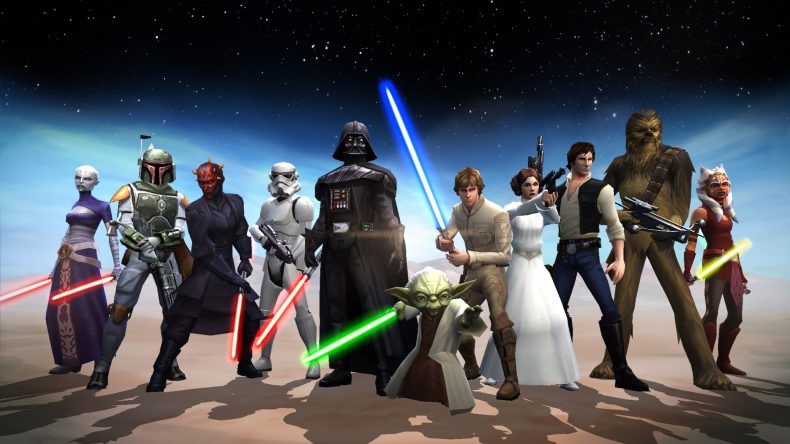 ‘I’m an idiot’. ‘I’m a stupid idiot,’ I think to myself as I feel my fingers edging towards the Buy button on Galaxy of Heroes. I mean, it’s only £3.99 for a pack of Crystals, so surely, that won’t hurt? I easily waste that on a naughty lunch, so yeah, why not, let’s do it. Five packs later and I’m still thinking the same thing. It won’t hurt. Honest.

It wasn’t till I got my iTunes statement that I realised how much I’d actually dropped on in-game currency. This prompted me to check my purchases for the last 3 months.

‘How did I get here?’ About two years ago, I hated mobile gaming. The very thought that it was trying to contend with console gaming made me sick to my stomach. I was convinced that it would never take off. I swore to myself that I would champion console gaming till the day I die, never faltering, and never surrendering.

At the time of writing, I have 31 mobile games installed on my phone.

In recent years, I slammed companies for implementing microtransactions into their games. I remember back to a time when PS2 games shipped and that was your lot. You got what you paid for. As time has gone on, developers have got lazier and lazier, putting out sub-par products, half made and funded to completion by the many pieces of DLC, microtransactions and currency packs released. They’ve seemingly taken their inspiration from mobile games as they’ve seen that the ‘Free to Play’ model (or F2P as they are more commonly known) clearly works. These mobile titles draw you in by being free and gradually gating progression, cleverly, behind money walls. You can play without spending a penny, but it then becomes a test of human nature. How long can you hold out to have another go at that level you didn’t complete? What? You only need one piece of gear for your character to level up? Just buy it! It’s only £10.

It made me think of the arcade machines of old; the very first model that made you spend. Back when it was 20p a go to bring your character back to life, people would spend hours in their local arcades, firing money into the slots without a second thought. The difficulty of the game spiked as you progressed, forcing you to dig deeper into your pockets. We never questioned it, we just enjoyed the experience.

I look back at how I was. Shouting at the games industry for going down this path. Watching franchises I loved being turned into simple money making machines. And for the sake of what? Lining the fat cat’s pockets? What about our enjoyment? What about what we love? This was a fight I was certain that with enough shouting and screaming, people would listen. I was so sure it would work.

About a year and a half ago, I was advised by a team mate during a Destiny raid, that I should try a game called Star Wars: Galaxy of Heroes. I wasn’t keen of course. Mobile games? Get out of here! But, trying to be open minded I opened the app store and downloaded it. I was quite shocked, the game seemed to give you a lot for a F2P title and never left me feeling like I needed to spend money. I was impressed, and to top it off, the game was actually alright. A nice simple collection game where you built teams using your favourite Star Wars characters. ‘Where’s Darth Maul’ I thought, only to find out that he was one of the few rare characters (at the time) you could only find in Chromium Packs. These particular packs are purchased using Crystals and they, in turn are bought with real currency. As much as I want him, I won’t do it. If I spend cash it means they have won. I thought I’d get by with the daily Crystals, but how long would my resolve last?

About 6 months in, they introduced a guild system in the game where players would join up to take on Raids. Challenges where super rare characters could be earnt through a group effort. Fancying myself as a leader, I set one and slowly, members began to trickle in. Over time, we created a Whatsapp group and began talking as people, getting to know one another and actually having a right laugh doing so. I was proud of the little community I had set up; it became special to me.

The competition grew stronger in a bid to get the highest scores in the raid. It was all friendly of course but, it came with consequences. The niggling voice in the back of my head kept saying, ‘get a small pack of crystals, it’s only £2.’ If I got those crystals I could then get more energy to farm that piece of gear I was after. I could use that to score some extra points. I snapped back to my senses thinking ‘I must lead by example, I must be the guild leader everyone expects.’

Things got serious when we set up a feeder guild where lower level players could train and eventually get promoted to the ‘main roster’. I was in. Fully in. I was spending 3-4 hours a day playing this game, managing two accounts and recruiting new members on all the forums I could. Then, the inevitable happened. I started to buy regular packs of in game currency. My justification was that I’d easily drop £40 on a game I might only play for 10 hours, so £10 on a game I’ve been playing every day for a year is nothing. Yeah it was fine. No harm done. £10 turned to £20 and then to £30. All of a sudden, the first thing I did on pay day was drop £50 on the second largest pack of Crystals. I did it without batting an eyelid. For the last 3 months, it’s been close to at least £70 per month spent. When I think about it, I feel a little sick.

But I can’t stop.

My guild mates joke and call me and a couple of the others that spend money ‘Whales’. The truth is we are more Minnows compared to the people that spend actual money on mobile games. I’ve heard various reports of people spending £300 to get certain characters where some have spent £1000+. Amazingly it’s a very low percentage (1-1.5% I believe) of players who actually fund around 70% of most of mobile games’ revenue. Its big business and no wonder other companies are looking at the model and adopting it. It bloody works!

It’s seems after prolonged exposure, I’m pretty much desensitised to it. This became apparent when I started playing Overwatch.

Towards the end of Blizzard’s first major Overwatch event, I found myself concerned I wasn’t going to get the costumes I wanted from loot boxes. Without even skipping a beat, I dropped £35 on a loot box bundle in a bid to get what I wanted. I would never have done this two years ago. But, I did it with a smile on my face, while in party chat, talking to my friend who was doing exactly the same thing. We had just finished a 10-game win streak and felt like celebrating. What heroes we were. Incidentally, 2 years prior, we saying we would ‘NEVER’ buy Silver in Destiny. Funny how things change.

I stopped playing Destiny about 6 months ago because it ran out of steam. I had just dropped £25 on the latest expansion that wasn’t floating my boat and the community of people we were playing with had grown a little toxic. The game was dead to me and all I could think about was jumping back on Overwatch, wishing I had saved that £25 for more loot boxes.  All of a sudden, money didn’t matter. It all boiled down to game enjoyment, helped along by the friends I made and the experiences we shared together. You can’t put a price on that.

The very fact that me and my Star Wars guild were talking about doing a meet up speaks for itself. I’ve never met half these people, but I feel on some level I know them; as if our WhatsApp group is some means for escape so we can chat about whatever is on our minds at the time. I’m sure all of this could have been achieved with not a single player spending a penny, but somewhere along the line, I think we stopped caring. The problem I thought was there, doesn’t actually exist.

Is this just the natural evolution of gaming? I honestly cannot answer that. I just know that I’m enjoying what I’m doing and it’s not affected me financially. There will always be something precious about games that are a standalone experience, but this has opened my eyes to a new world. It’s easy to see why this is the way games are going, because as they get more expensive to make, companies need to find new ways to bring in cash.

As long as companies never forget where gaming all started, then maybe there is room for both models. In a world filled with fear and hate, what’s a little money here and there? There’s nothing quite like a little friendly competition to bring people together.

That is a future, I think I can live with.