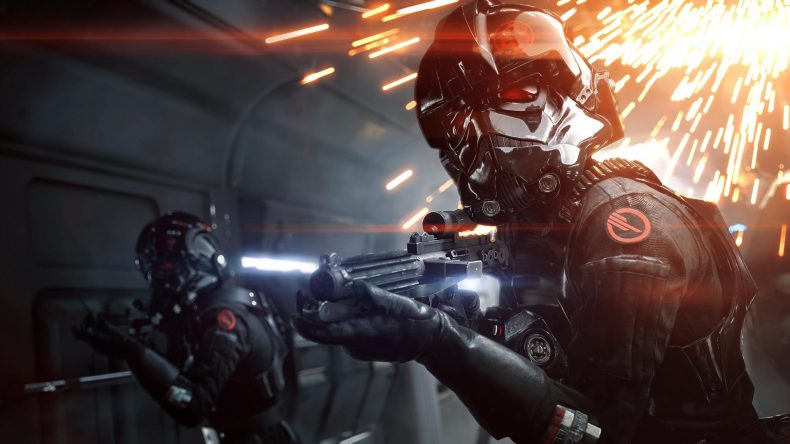 We may still be a few weeks away from the launch of the new Star Wars film, which we all know is the main course, but to get us started we have the pretty great Star Wars Battlefront II, and its impressively large multiplayer offering. With a ton of modes, characters, classes and confusing progression system there is a lot to wrap your head around and even after hours of playing there is still a lot to learn.

Fortunately I spent two entire days playing with everything in the multiplayer side of things, including every unlockable possible, and am here to report back and give you the insider tips to make sure you don’t make the same mistakes I did. There’s a lot to get through, so here are my top tips to dominate in the Battlefront II multiplayer modes. Screams of “bullshit Yoda” could be heard throughout the games room at DICE during our visit. Almost everyone seemed to agree that Yoda is actually really quite strong, and for many became the go to hero of choice whenever he was available. In normal game modes that involved standard classes and heroes on the ground Yoda is just really strong. He can keep enemies from getting close to him, which makes taking him down difficult, and his maneuverability means he can easily get on top of anyone.

Yoda really becomes a pain in the backside in the Heroes vs Villains mode on certain maps. See in this mode everyone plays as a known character, one on each side is marked as the target, and the first team to kill that target gets a point. Now a lot of these maps have areas where you can fall to a quick death, so if Yoda can find the target, it is very easy to use his push ability to send someone flying to their doom for an easy win. Basically, pick Yoda a lot.

The unlock and progression systems of Battlefront II are confusing to say the least, but from my experience loot boxes often felt a little underwhelming. They cost a fair amount of credits, and rarely give anything useful. Instead you can use the credits to unlock heroes you like the look of, and you can get the Star Cards you actually want by crafting them, which is a much better system. Sure you might get a good deal out of a loot box, like a hero, but the chances of that seem pretty slim. Learn when to spend your points

Yes we all want to play as Yoda, or Darth Vader, or Luke, or one of the heroes, but they cost a lot of in game points and sometimes you might not even get enough in a game to reach the cost of the big names. But if you use your points wisely then you can speed up the process. If you have a few thousand points, it might be worth investing in one of the cheaper class upgrades that have advanced weaponry or into a vehicle. Get a good run with a tie fighter over the battlefield, or with a walker taking everything out and your points investment will probably at least double, and when you go down you will be much closer to your hero goal than you originally were. Saving all your points for the most expensive heroes is a very risky move, as if you fall behind early they may not be enough to swing the game back in your favour.

Let’s say you are playing walker assault on Hoth. The first section is out in the open and if you have enough points is a perfect place for an AT-ST to wreak havok. But once this first stage is complete the action moves inside and the AT-ST becomes pretty much useless. As you can see, investing in an AT-ST just before this switch happens is a massive waste of time and points. You need to learn the maps quickly and be in a position to know when the area of play is about to change. Wasted points usually mean lost games. I truly hated the heavy class when I first played it. It was slow, difficult to control and seemingly a very boring way to play. But after a day and a half of avoiding it I tried it one last time, with all of the Star Cards unlocked, and it felt totally different. The abilities had changed, the new weapons felt good and it actually felt useful, instead of just a big slow target with limited damage. While it was boring as hell to play in the early game, the Star Cards changed it entirely, so never give up on anything until you have given it a good chance.

Starfighter Assault is a great game mode, perhaps the most enjoyable out of the lot, and it really does give you the feeling of being in the first Star Wars movie. From the surface it looks super difficult, having to fly a massive ship through some very tight spaces, but the truth is that you can get away with a lot in these confined spaces.

The team realised early on that no one could ever fly through these sections perfectly, so the object hit boxes are very generous. This means that if you clip the edge of an interior wall you will live to see another day and not die instantly. Once you figure this out it becomes a lot easier to focus on destroying the objective in these tight spaces and not simply just staying alive. Be ballsy in these areas and you will be rewarded.

Tips based on play conducted at DiCE HQ in Stockholm. EA paid for travel and accommodation for the trip.
Features, Guides
star wars battlefront II

eSports! I joined God is a Geek all the way back in September 2013 and since then have spent most of my time on Dota 2, and occasionally posting the odd review, news article or totally wrong predictions for The International. When I am not playing Dota I can probably be seen watching some kind of strange eSport or begging for more Twitter followers (@MikeStubbsy if you are interested). Aside from GiaG I am a computing student, football coach and major Apple fanboy.
MORE LIKE THIS
star wars battlefront II