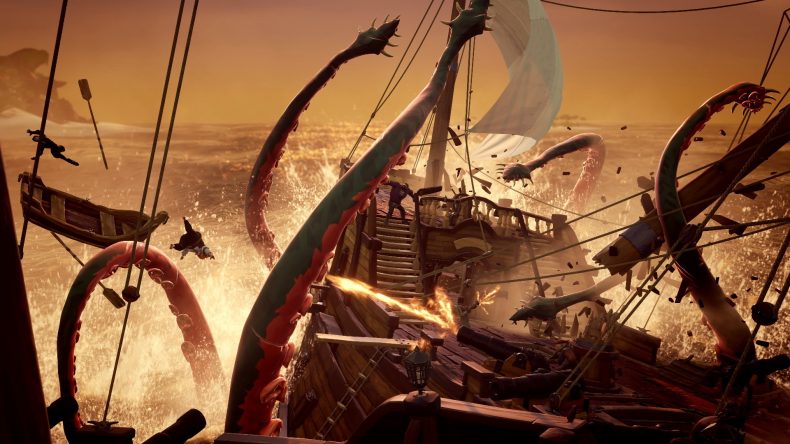 Sea of Thieves is a game I have been quietly hopeful for ever since it was announced. My interest and excitement for the game has waxed and waned over subsequent reveals, but I have been consistently optimistic that Rare were working on something that may well turn out a bit special.

I have spent a fair few hours the past few days with the open beta and have reached the conclusion that my enthusiasm for the game is still waxing and waning. There is a caveat here though, I don’t generally respond well to betas, or even game demos. I often feel that they do more of an disservice to the game than provide any positives. I can think of numerous games where the beta left me cold, but when I have actually come to play the full game I have absolutely adored it – Titanfall 2 and more recently Monster Hunter World are great examples. That is not to say that the Sea of Thieves beta has left me cold, far from it! I am, however, a little confused still as to what Sea of Thieves will actually turn out to be when it fully launches. First of all, it is clear that the beta does not include everything you can do in the full game. At present there is only one faction that you can do tasks for: The Hoarders. A representative from the Hoarders can be found at any outpost. If you visit him, he has a number of tasks that you can take on which consist of a treasure map with an X marking the spot to dig up the treasure. Should you be successful in deciphering which island the treasure is located on and then digging it up and returning it, you will be rewarded with gold with which you can purchase another contract or if you have enough gold, purchase items of clothing and other accessories. The premise is pretty simple and if you are operating on your own you can get straight to trying to locate which of the many islands on the map is the one with the treasure. If you are in a party of two or four, you all have to agree to do that mission before you can start.

The Hoarders quest is the only guided thing you can do at present, so it is a little hard to gauge exactly what the full game will offer in terms of objectives etc. For me, the beta seemed to be more about focusing on exploration and messing about doing pirate things like getting hammered on grog and throwing up on the beach, and launching myself out of cannons. You can play Sea of Thieves on your own, and there is a certain relaxing pleasure in that. I spent about an hour sailing around looking at the water, which is absolutely stunning. On one trip on my own, I moored up near an island as a storm was blowing in and I was losing control of my boat. The waves had battered my little craft around so much that I had to patch up some leaks in the hold and use my bucket to bail the incoming water out. I spent a rough night sat on the prow of my boat watching the weather and the angry seas, then as daybreak came and the water settled down I spied another solo ship coming my way. I could see a glint in the distance and I realised that the other player was spying on me through his telescope, so I equipped mine to take a look to see if I could work out whether he was friend or foe. Through my telescope I saw him turn his boat towards me then run up to the prow of his boat and wave at me. I waved back, cautiously.

As he drew nearer he pulled up his sails and dropped anchor and we waved at each other again. I was still unsure whether he was going to be aggressive, so I got my accordion out and started playing a song on it, and he did the same thing! Then from behind me I heard another strain of the same song, only to turn around and see another player on my ship who had come up behind me while I was focused on the other one. The first player then dived into the water and swam over to my boat and we spent a couple of minutes playing accordion, dancing along and waving at each other on my boat before they both dived off the side to their respective ships and left me to mine and we all set sail in different directions. It was quite a wonderful moment, and at the point I felt that Sea of Thieves perhaps had something to offer. I also tried a couple of times to matchmake into a crew of four with limited success. The first time I did manage to get in I couldn’t find the boat, and I ended up getting hacked down by two aggressive pirates in one of the outposts. I had no idea if they were members of my crew or not! Another time, I spawned and my crew were nowhere to be found so I high-tailed it out of the outpost in a huge galleon on my own and promptly drove it into a sheer rock face sticking out of the ocean. I desperately tried to patch up the holes appearing in the hull, only for it to sink under me, all while I was chuckling away to myself wondering where the hell the rest of my crew were.

The beta is definitely limiting, it relies very much on experimentation with no guidance telling you what things you can and can’t do, but it feels very much like Rare is creating a watery sandbox for players to do whatever they fancy. Sailing around on your own has a certain contemplative pleasure to it to that I was particularly drawn to. The world is beautiful to look at with some quite astonishing water physics. I haven’t spent long enough in crew mode to fully understand how things slot together as a team of four, and I didn’t see much by way of sea battles which interest me. The idea of two galleons squaring up firing canons or crew members at each other has a draw to it. There is something interesting in Sea of Thieves, something drawing me back to it, but I can’t quite put my finger on what it is. I have hopes that the full game will be a success. For now I am suitably intrigued that I am looking forward to the forthcoming launch with interest.

Likes to shoot stuff and wear pretty shoes. Is a BEAST at Titanfall.
MORE LIKE THIS
BetaSea of Thieves