previous
Days of Play returns with a new PS4 console bundle and many discounts from Sony
random
next
Moonlighter is now available on PS4, Xbox One, and PC
0 comments 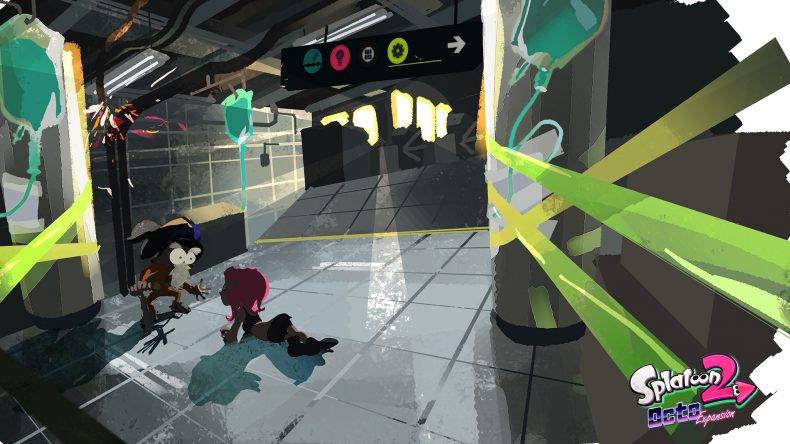 Splatoon 2 was great, there is no denying that fact. However, if there was one complaint that some people may have had, it was that the single player offering was a little underwhelming at launch. It was certainly fun, and was perfect for teaching you how to play but some felt it didn’t quite live up to its potential.

Fortunately for those people, the Octo Expansion for Splatoon 2 is almost here, and with it comes 80, yes 80, new single player levels that are pretty challenging to say the least. Despite only getting to try less than 10% of the new offering, it became clear that these levels aren’t a walk in the park.

While the difficulty was one thing, the amount of variety that we got to see and play was incredible. Every level was entirely different to the last, and there were some very cool ideas. Here are 5 of the crazy things I did in the Splatoon 2 Octo Expansion:

Pushing a giant 8 Ball around Using only the paint that comes from your weapon, this level forces you to push a giant eight ball, that is at least twice as tall as your character, around the entirety of the level. If it falls off the edge, then it’s back to the last checkpoint. You have to use the ball as cover and then pop out at just the right time to take down foes, while making sure not to push the ball away. You then have to push it down some very tight corridors where a single mistake could take you back to the start. The finale of the level requires you to knock it out of the air at the appropriate time with a big explosion to reach the goal. So a sniping gallery level may not sound too interesting, but Splatoon 2 changes things up. You come onto a platform and are faced with a load of enemies in front of you that you can’t physically reach. You start to take them down with the sniper, dodging behind the sole bit of cover available every so often and quickly realise many foes are out of range. A button on the side makes the platforms rotate bringing enemies into range. It plays out like a carousel of enemies to snipe to your heart’s content, and was great fun.

It’s not quite the real Jetpack Joyride, but one level was almost entirely platforming with the Inkjet equipped. There were only a few enemies to take down but the real challenge was the platforming bit. Some of the jumps required precise timing and movement and this is one of the hardest platformer levels we have ever seen. This bit was frustrating at times but it was very satisfying to successfully execute a massive jump and then fly back with the Inkjet. The Baller is nothing new to Splatoon 2 players, but some of the levels here certainly will be. It felt like Super Monkey Ball when we were put into the Baller for the full level. This level was very well designed with varied sections that go from needing precise timing to some that just have you going as fast as you can. The brutal time limits for each section also make this as challenging as the other levels if not more.

The variation and crazy ideas so far have all been great, but one of the best levels was pretty simple on paper. You are on a floating arena and enemies keep spawning around you. You’re equipped with a very short range Slosher and you have to get up close and take the enemies down. The floor here is made up of crates that will disappear if they get too much paint on them. This means that unless you are very tactical with movement and and attacks, you might end up falling to your death. There’s a lot of strategic depth here and it is great seeing such a simple idea made more complex. These are just the five things we did in our demo and with 75 other levels coming with the full expansion’s release, we can’t wait to see what’s next. If the quality and design holds up as well as these levels, everyone will be in for a treat. The Octo Expansion so far seems like a great package and it certainly left us wanting to play even more which is always a good sign.

eSports! I joined God is a Geek all the way back in September 2013 and since then have spent most of my time on Dota 2, and occasionally posting the odd review, news article or totally wrong predictions for The International. When I am not playing Dota I can probably be seen watching some kind of strange eSport or begging for more Twitter followers (@MikeStubbsy if you are interested). Aside from GiaG I am a computing student, football coach and major Apple fanboy.
MORE LIKE THIS
nintendonintendo switchSplatoonsplatoon 2