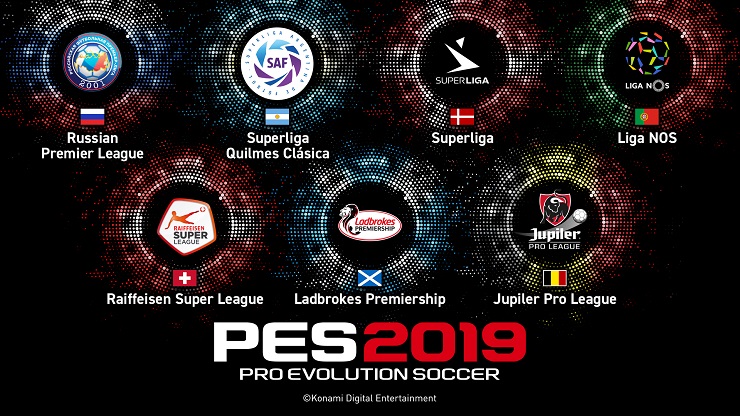 As one door opens with PES separating with UEFA another opens as Konami sign seven licensing agreements with football leagues.

With FIFA being the daddy when it comes to football licensing Konami has always had a bit of an uphill battle with ensuring it has all the correct kits, leagues, teams and player names, as a result they find themselves striking up deals with individual leagues to make sure they don’t just have the best player likenesses around.

Today’s news is that PES 2019 will include seven new authentic leagues with the Danish Superliga, Portugal’s Liga NOS, Belgium’s Pro League, the Swiss Super League, Scotland’s Ladbrokes Premiership, the Argentine Superliga and exclusively to PES 2019 will be the Russian Premier Liga. This makes PES the only place you’ll be able to play as teams like Spartak Moscow and Zenit.

Further, according to the PR blurb the game will have more ‘true-to-life visial effects’ and real time ‘Global Illumination lighting and shadows’. They’re boasting of better crowd detail, real grass textures and a snow weather effect, there’s no word on whether they’ve improved the commentary though.

It’s no secret that we here at God is a Geek are fans of PES, so we’re dead keen to get our hands on this bad boy, and there’s not much longer to go. PES 2019 will release on PS4, Xbox One and PC globally from August 30.

A lover, not a fighter and an all round good guy (he would say that, he wrote this after all), he's happy to be here as part of GIAG.
MORE LIKE THIS
KonamiPCpespes 2019