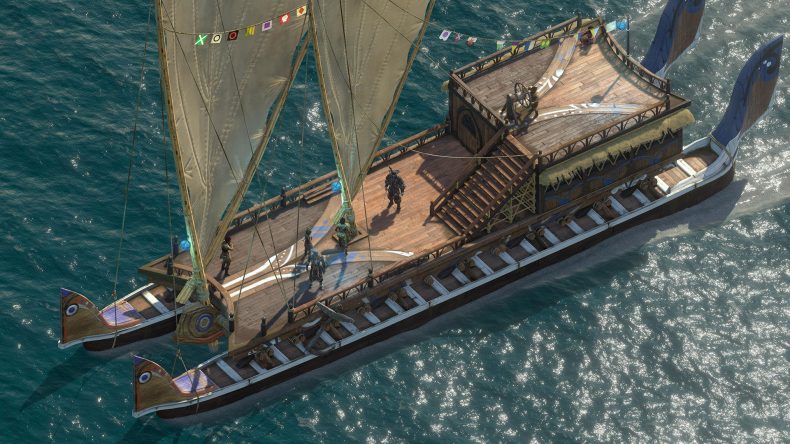 Given the size of a game like Pillars of Eternity II, it may come as no surprise that I haven’t managed to finish the thing in time for a full launch review. To rush through it would do a disservice to the game, its creators and most importantly, to you, dear reader. That said, I wouldn’t want to leave you without any kind of guidance, which led to me writing down my early impressions of this massive RPG from the creators of such genre classics as Knights of the Old Republic II and Fallout: New Vegas.

The game opens with the god Eothas taking control of a massive statue, crashing out of the earth and destroying your home, killing almost everyone living there. You awake some time later, in a place beyond realms, a formless mass of light that is invited to sit at a table opposite a god. Speaking to this god allows you to shape the character as whom you will eventually journey through the game, while also giving you insight into the world and recapping the events of the previous game, for those unable to finish it in time. Or, like me, unable to find time to play more than ninety minutes of the original. Once the god dismisses you, after forcing you into service and sending you on your way to follow the massive being that is currently trampling kingdoms underfoot, you awake aboard a ship and although the next few minutes are essentially linear, you’re given full control over how to deal with the situation at hand. Much like the previous game and the old Baldur’s Gate games that inspired it, Pillars of Eternity II’s dialogue systems are incredibly varied and extremely important. For example, my response to the pirate threatening the crew of my ship, was to taunt him. “You’re surrendering to me?” I ask, knowing full well that I’m outmatched and outgunned. He would remember that upon meeting him again down the line, it turns out.

In terms of the core gameplay, most of Pillars of Eternity II feels like an improvement on the existing formula, but remains largely unchanged. You’ll take your crew of miscreants and rogues into various towns, dungeons and beyond, talking and fighting your way through each situation and looting chests and bodies along the way. Combat is akin to a strategy game, only you pause the game with the spacebar (or customise the pausing mechanic via the options menu, to auto-pause whenever certain conditions are met) and give orders to individual characters, in order to take advantage of their strengths and avoid giving away their weaknesses. You might keep your wizards away from direct combat, choosing to shower magical destruction upon your enemies from afar, as your fighters wade in with swords a-swingin’. Rogues might stealthily flank opponents, dealing extra damage from places of opportunity, while those wielding firearms pepper enemies with gunfire from a place of relative safety. Quite honestly, no two battles are the same. At one point, while assaulting a pirate outpost, I entered a room that was full-to-bursting with violent pirates, buccaneers and a rather large fellow wielding some big, blunt weapon of bludgeoning. Needless to say, I was caught by surprise and in a matter of moments, half my party was downed and I was basically screwed. Luckily, I had quick saved just before (this is a practice cultivated by a random crash earlier, but actually turned out to be an invaluable tool) and so decided to reload and try again, this time armed with the knowledge of what lay beyond the door ahead. I had my main character, a fighter, open the door; just behind her was Edér, the rogue and seemingly our bestest friend ever (voiced, I believe, by the brilliant Matthew Mercer) and I had my two ranged characters, a gunner and wizard, stand a little further back to shield them from the coming onslaught. I intended to use the doorway as a bottleneck, but at the last minute I realised that my gunner had pilfered some bombs earlier; this resulted in an almost SWAT-like breach manoeuvre, bombs surprising the pirates within and blowing half of them to hell, before swords, axes, gunfire and destructive spells wreaked havoc on those that remained alive. Well, they remained alive for a moment longer anyway.

Unlike the original game, Pillars of Eternity II: Deadfire contains more than just land-based exploration. As it is set in the titular Deadfire archipelago, you’ll get to sail on the high seas, fulfilling some pirate fantasy or other as you travel around the world map. This brings with it a whole host of new features, not least the need to keep your ship’s supplies stocked up and your crew happy; stopping at ports provides opportunities to buy food, water, repair materials and even new cannons and sails so you can fight off any scurvy-infested sea dogs that cross your path. Do you remember those old movies, when long-distance travel would be indicated through the use of a map, an animated line showing the route the hero(es) would take? I can’t help but think of that, when traversing the world map here. Your little ship moves over the waters as normal, sure, but as soon as you reach explorable islands, you’ll simply see your portrait moving around the place. If you discover more intricate areas, the game will transition into the proper gameplay model, but until that point you’re just like that animated dotted line in old movies. I kinda love that.

When you do finally get into a proper sea battle though, with one of the pirate ships sailing around the Deadfire, that’s when yet another new gameplay style comes into play. Pillars of Eternity II already has heavy Dungeons & Dragons influences as it is, with its long, descriptive passages that set the scene, as well as the behind-the-scenes dice rolls and checks performed during combat; the ship-to-ship battles are one step closer to actual pen and paper D&D, as everything plays out via text. Sure, you have a little rotating dial that depicts your boat’s orientation in relation to the enemy, but that’s about it. You’ll make choices that affect how fast you’re going and you can out manoeuvre the enemy before opening fire on them, all with choices similar to those seen in conversations. These all result in invisible dice rolls and whatnot, with sounds and artwork depicting images of each outcome. Now, you’ll either like this kind of thing or not, but I personally enjoy engaging the ol’ imagination and this game has you doing that often. Finally, the ship combat does sometimes result in getting tangled up and either boarding the enemy or vice versa, which then transitions back to the traditional isometric view of your characters aboard the ship. You can choose whether or not to have the camera move with the roiling of the seas, so just be wary of that if you have motion sickness issues, but if you can stomach that then it really adds to the atmosphere as the rain pours down and the battle gets personal on-deck.

The atmosphere in Pillars of Eternity II really is something special, especially for those of us that enjoyed games like Baldur’s Gate, Icewind Dale and the like. This is far more forgiving and playable than those earlier games however, thanks to its impressive AI and an array of difficulty options that can suit even the most tactically-inept of players, such as myself. There is even a scaling option, which will help to keep the difficulty in that sweet spot for everyone, as it will scale enemies up to match those who are finding it a bit too easy, or scale it down so that idiots like me won’t get too overwhelmed when stumbling into areas a little too early on.

Of course, all these things that I’m currently enjoying, may turn sour after a few more hours have passed by, which is why this isn’t a scored review. I’ve already seen enough to suspect that Obsidian won’t suddenly screw the pooch and send the game plummeting off a cliff and into Davy Jones’ Locker, but I’ve been wrong before. As it stands, Pillars of Eternity II: Deadfire offers quite a lot of new ideas to keep returning players from growing tired of the same old things, and new players should be able to slips happily into the game without needing to have played through the original. It will certainly help, as characters return and it tends to reference the original story here and there, but like The Witcher 3, Deadfire seems to be handling it admirably.