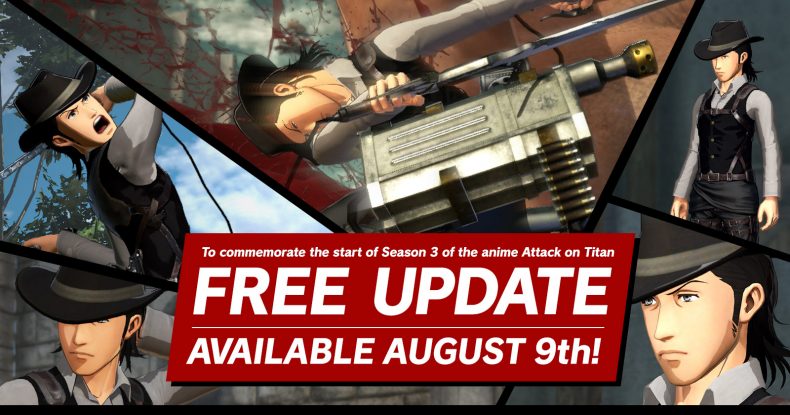 Koei Tecmo America detailed an upcoming free content update that will be arriving next month for AOT 2 on all platforms.

AOT 2 (Attack on Titan 2 in NA) is the follow up to AOT: Wings of Freedom. Read my review of it here. Koei Tecmo will be pushing a big update next month adding a new difficulty option, practice modes for online, a tie in with the third season of the anime, and more. The update details are below:

A new character, Kenny, has appeared in Season 3 of the anime “Attack on Titan.” Players will be able to equip his hat in character creation. Recreate Kenny and take him for an omni-directional mobility whirl to drive off the terrible Titans.

In the Heaven difficulty, consumables like gas and blades, as well as battle items such as smoke signals, have unlimited usage, allowing players to focus more on the actions themselves.

Original characters can equip some of the unique skills of the characters from the anime, allowing players to assemble all the skills with powerful effects. Skills are learned after beating the anime character with that skill after that character has reached level 10.

The “Showdown” and “Expulsion” modes were distributed as online only modes. Now players will be able to practice and polish their skills before actually going online. In addition, the completion reward for Titan Biological Research Report has been changed from Titan Research Room EXP to a Generic Statement of Deployment. It’s now also possible to carry out a Titan Biological Research Report without using any Wings of Freedom.

Functionality to choose the in-battle background music has been added to the selection screens for scout missions and past missions. Select from all unlocked BGM listed in the gallery.
Multiple pieces of equipment can now be developed at once. Also, up to 30 materials can be chosen at a time when reinforcing equipment.
Generic Statements of Deployment have been added to the regiment store.
It is now possible to skip certain camerawork during battle. AOT 2 is available on Nintendo Switch, PS4, Xbox One, and PC. Here’s everything you need to know about it.