10 tips to die with style in Dead Cells 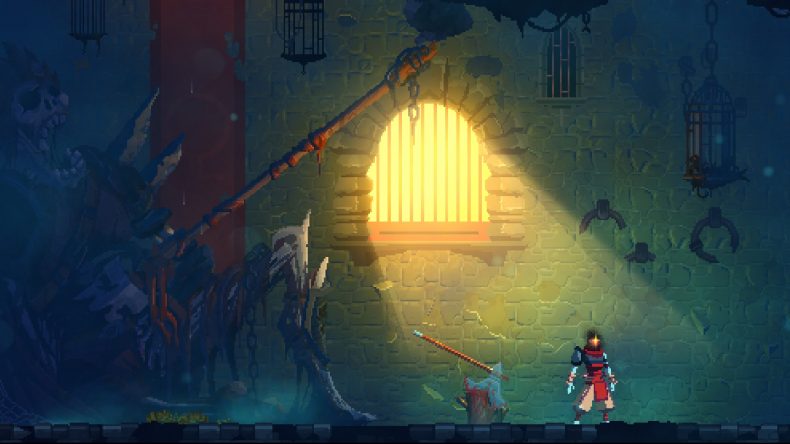 When you start Dead Cells, Motion Twin’s side-scrolling rogue-like Metroidvania (wow, this sub-genre really needs a shorter name), you’re already a goner, reanimated by a mysterious goo that really, really wants to escape the nightmarish prison you’re trapped in. But guess what? You can still die over and over again as you attempt to navigate the traps and trials of this hellish gaol, and every time you do you’ll be bounced right back to the start, no checkpoints, no teleporters and no secret passageways.

As always, we at GodisaGeek are on your side – so here are 10 handy tips to help you survive Dead Cells for as long as you can, and then die in style.

Act in haste, repent in agony

The first thing to know about Dead Cells, and perhaps the thing that’s least clear from watching gameplay videos, is that it’s a marathon and not a sprint. There’s so much of a focus on speeding through, and indeed so much of the game seems geared toward speedrunners, that you’d be forgiven for thinking that speed is of the essence – but it’s really not.

It won’t be long before people are clocking completion in a matter of minutes, but the truth is Dead Cells is super-hard at first. Until you’ve gotten your head around every weapon, every enemy, and every hazard, and come to terms with the fact that so much of the game is randomised on every playthrough, you’re better off taking your time and just trying to stay alive long enough to finish a run. That being said, brevity is the only way to reach the Hourglass doors before they lock and hoover up the goodies they guard, so once you’re comfortable with an area, feel free to put your foot down. Explore the nooks and crannies

Following on from that, this is a world you’ll want to explore. For a side-scrolling platformer, it has a sense of definite peril matched only by Salt & Sanctuary, but it’s worth swallowing your unease and powering through to explore every nook and cranny. All the enemies drop something useful, be that gold and jewels, Dead Cells, weapon blueprints or recovery items, and secrets are hidden everywhere.

If you want to maximise your stats and gear in every run – and you certainly do – you’ll need to uncover every corner you can, and kill or loot whatever’s lurking there.

Like Blood Echoes in Bloodborne and Souls in Dark Souls, the glowing blue cells in Dead Cells are the single most important currency. In the safe areas between stages you can spend them for permanent equipment unlocks and abilities. The most important of these is the Health Potion I, which will give you a single 80% health recovery, per stage – but you increase that by spending more Cells, or invest in a Dead Man’s Bag to save a set value of gold upon death.

Aside these essentials, you can also use Cells to permanently unlock starter weapons – though it will cost even more Cells to make them available from the get-go. Either way, the trick is to pick something you want and then pump all your Cells into it at every available juncture until it’s yours. Spreading your Cells between multiple targets will just take longer, especially as you’ll be lucky to collect more than 20 – 30 per area and larger unlocks like Health Potion III cost a whopping 300. It’s a diverse line-up of nasties that populate Dead Cells’ various dungeonscapes, and while batting blindly at them and screaming for mummy will do you for a (very short) spell, the best way to live longer is to learn their attack patterns. All of them will stalk, bounce, slither or fly from left to right in a rigid patrol area, but the power, timing, range and frequency of attacks vary wildly from enemy to enemy. Approaching all of them in the same way will see you tumbling back to the start over and over.

Luckily, they all have a visual tell in the form of a yellow exclamation mark and a grunt, growl, or squeal that signifies they’re about to attack. Almost all attacks can be rolled through, so use those invincibility frames to get behind an enemy and never, ever, stand still near a bad guy. That would be stupid.

Seems obvious, I suppose, but while you can get through most encounters with just your primary and secondary weapons, the traps and buffs mapped to LT and RT are essential tools. Bear traps hold enemies in place, bombs explode (duh), and turrets can be devastating even to bosses. There are also tonics and artefacts to buff you, as well as magic spells like lightning bolts, blasts of frozen air and fireballs.

The beauty is that in Dead Cells you don’t have a mana resource to worry about – instead you just have cooldowns on your tools to contend with. There’s such a diverse range of tricks and traps that it’s worth experimenting, and when you find a combination you like, abuse the crap out of them. While we’re on the subject, did you know you can synergise certain weapons? For example, there’s a sword that douses an enemy in flammable oil. Lob a firebomb at them after hitting them with the Oiled Sword and they’ll go up like dry old kindling. That’s an obvious one, but you can also electrify water with the Energy Whip, and combine certain weapons with certain buffs, such as a sword that does increased Critical damage when you’re under the effect of a speed buff.

While you can’t guarantee which weapons are going to be available at any given time, always double check the effects before you discard something that seems less powerful.

Self improvement is key

Remember, too, that you can both upgrade weapons and re-roll their stats in the safe area. One of the NPCs will helpfully allow you to change the random PRoCs (programmed random occurrences) on a given weapon, ability or trap, while you can also upgrade it to a +, increasing its effectiveness.

Another NPC will also let you choose a mutation at the first three safe areas you visit. These include an extra life, reduced cooldowns, health per kill, and 30% more HP. You can only unlock each of them once per run, but they’re hella useful. The Daily Challenges vary wildly in difficulty. They’re usually a timed run of a single stage and boss, but some will ask you to kill all the enemies you find or avoid being hit, for example. They’re accessible from the clock door at the starting area, or from the main menu when you boot up the game, and they’ll reward you with all sorts of goodies from blueprints to Cells.

If nothing else, they make for great practice rooms as the enemies are varied and often tougher than usual, and the challenge areas are full of traps and other hazards – and there’s almost always a boss to beat at the end.

Money comes easy in Dead Cells. Every enemy drops it, and there’s an abundance of gems to find and scoop up in every stage. Once you unlock the Dead Man’s Bag you can store a certain amount upon death. The point is, spend it. Every stage has a shopkeeper selling three random weapons, buffs, or tools, and you can throw money at the NPCs between stages to improve your shit and increase your chances of survival.

Don’t be afraid to blow every penny on upgrades and gear, every run, because you can always loot more. The onus is on getting stronger with every incarnation and, besides what you can store in your bag, you can’t take it with you when you croak.

It’s not an easy game to exploit, but Dead Cells does allow you to farm in a way. If you hit Restart on the options screen, you’ll go back to the beginning and lose all your weapons, gear, and stat increases – but you’ll retain your progress with the Collector, the creepy apparition with whom you spend your Cells.

If you’re desperate to unlock a new starter weapon or increase your health flask capacity, playing the first few areas and then restarting can be a decent way to farm Cells and get a leg up.

Senior Content Editor Mick has been playing games for over 30 years and writing about them for around 12. After drifting from site to site for a while, settling briefly at the now-defunct Made2Game and freelancing for the gone-but-not-forgotten NintendoGamer Magazine, he came at last to rest at Godisageek. Mick has been a reviewer, staff writer and content editor here for some time, while also moonlighting a little for Red Bull Games. He has 4 kids, has written 2 novels, and sometimes even manages to pay a bill or two. You'll usually find him defending the galaxy in Destiny 2, battling evil in Diablo 3, or lurking in the background on Twitter. Find him there @Jedi_Beats_Tank, or on XBL (JediWaster247), PSN (Jedi_Waster) or Nintendo (JediWaster).
MORE LIKE THIS
dead cellsGuidetips