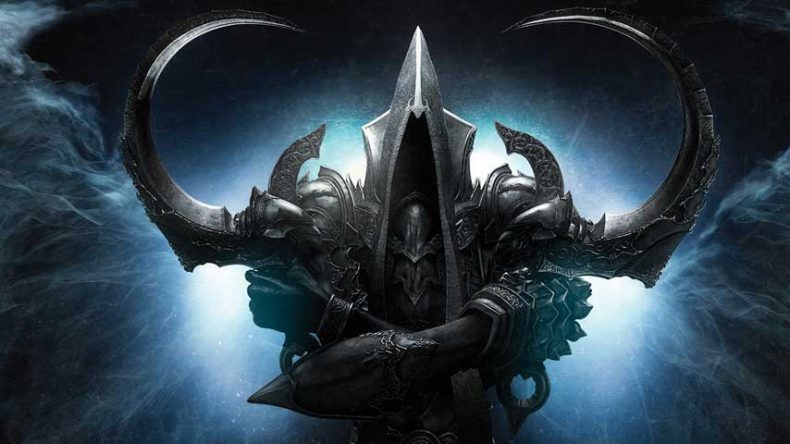 What can I do to put you at ease? Shall we begin like David Copperfield? I am born, I grow up, I play Final Fantasy VII. Or shall we begin when I was born to the Grind, as I call it? That’s really where we should start, don’t you think?

Am I paraphrasing Brad Pitt in Interview with the Vampire? Yes I am. Is it relevant? I’d say more cool than relevant, but you’ll understand my point in due course. I’m talking about the quiet addiction that seizes so many gamers, that induces sleepless nights, that results in hour upon hour of lost productivity, that scuppers the best laid plans of mice and men, and, in its darkest, purest form, devours entire months in a blur of dings and whoops.

If you’re like me, if you’ve ever looked up at the clock through bleary eyes to find that it’s suddenly 4am when you have to be up at 6 and have realised, in that unholy moment, that you care more about hitting the level cap than you do about maintaining your monthly income, then you know exactly what I’m talking about.

The Grind. For the Grind is all.

My personal love affair with the Grind began in 1996, when 15-year old me, struggling with the hole in my life created by the realisation that I had finally rinsed FFVII dry, perched on my uncle’s desk chair and discovered a new Mecca: Diablo. Tottering, wide-eyed and innocent, into the hamlet of Tristram I had no idea of the pleasures that awaited me there. And then I discovered Loot.

XP is one thing, people, but Loot… That was something altogether different, and from out of the unholy union of these two addictions rose the Grind, the altar of worship before which I have bowed my head ever since. Blizzard were my Gods, Diablo was my church, and for the last 22 years I’ve sought out the thrill of looting and levelling wherever it can be found. Disturbing religious undertones aside, I’m never happier than when the XP is climbing and the loot is dropping. I can’t tell you exactly what it is, but I could plough through a hundred corridor shooters or a thousand platform games, and I’ll never experience the same affinity as I do with the RPG.

It’s not even about character building, per se. Don’t get me wrong, I can blow hours in a good character creator tweaking noses and… various other sliders, but it’s not the role-playing that hooks me on role-playing games; it’s the progression.

I spent almost the whole of 2007 and 2008 hooked on World of Warcraft. I came in not long after the launch of the Burning Crusade and spent a solid 18 months basically ignoring almost everything else in life, including, at least twice, food and water. The Grind took over in a way that genuinely surprises me, even now.

It’s not hard to see why, either. At the time I was engaged to my now-wife, working a crummy job and going through what I can only describe as a career slump. I wasn’t unhappy, or anymore unfulfilled than the next 20-something on the bottom rung of a ladder they’d made a conscious choice to climb. But I was largely unoccupied. My fiancée and I worked different hours, had different sleep patterns, smart phones didn’t exist and beards weren’t back in vogue yet. I found myself with a lot of free time. WoW filled that free time. With a bullet. My character was a Draenei, which if you don’t know is like a goat person crossed with a Navi from Avatar, only sexy. She was a Hunter, she had big horns and killer thighs. She joined a Guild, and made friends with a Dwarf who typed in the broken English of either a non-English-speaker or a voracious drunk. So far, so good. Slowly, as it does with games even today, theory crafting began to take over. I found myself studying forums and watching videos, arguing with people in chat rooms who I ironically referred to as geeks.

I got good, and because I got good, I found myself in demand. My guild got excited when I logged in. My mediocre popularity in real life was eclipsed by what I perceived as a form of semi-celebrity in WoW. The Grind to the level cap became the Grind for faction rep. I was staying up until 4am on a diet of taurine and cheesy puffs to raid dungeons with people from all over Europe with character names I couldn’t pronounce. I learned terms like “re-roll”, “threat”, and “proc”, and didn’t realise when I’d been used them in conversations with my boss or my nan until way too late, every time.

The Grind had me. It was the goblin on my back, and I knew I needed to be rid of it. I remember the day, some time after my wedding and the birth of my daughter when, at 2 in the morning, I found myself arguing with a 14-year-old Swedish kid with a Napoleon complex about fucking up his raid. I sat back in my swivel chair, looked over at my sleeping wife and child, and for the briefest moment I took stock of my life. With an almost mechanical, detached indifference, I uninstalled World of Warcraft, went downstairs in my Snoopy undies and Gizmo slippers (that’s right, I am a rockstar), and threw it straight in the bin (though not before selling everything I owned and sending my brother’s Night Elf an epic fuck-ton of gold. I mean, I’m not a monster). I was done with Azeroth, and I was done with the Grind.

Turns out the Grind wasn’t done with me.

Since then I’ve drifted from lootathon to lootathon, Diablo 2 to Borderlands (aka Gearbox’s One Good Franchise™), through Baldur’s Gate, Guild Wars, Titan Quest. With the advent of Diablo III on console my love for the Grind came back like an angry groinal itch. I know Blizzard’s threequel had its detractors on PC, but with little competition and a wealth of refined systems, Diablo III on console was, for me, an almost perfect experience. The immediacy of its reward loop, the constant progression even after unlocking the Platinum, the instant gratification of the Adventure Mode… Diablo III speaks to that part of me that yearns for any kind of achievement it can get. Well, any achievement that doesn’t involve actually leaving the house.

And when I get bored of demons and hell-spawn, there’s Destiny (well Destiny 2 now), and Warframe. The colourful cascade of gear and currency, the endless cycle of killing, looting and levelling, is escapism in its purest form. My most recent true love has been Monster Hunter World, a game built almost entirely upon the loop of failure, success and prayer, as you battle mighty, rampaging beasts in contests of skill and endurance, and then have your victories repeatedly reamed thin by one of the most bloody-minded random number generators in the history of video games.

Of course, that’s where a good portion of the buzz is born: in the bragging rights. It’s why a game like Destiny gets it wrong, and so much collective chagrin is fire-hosed at Bungie every week. Gamers don’t necessarily want to be able to buy the rarest loot in-game – and we certainly don’t want the coolest shit on offer locked behind a real-money storefront. We want people to look at that gun we ground all night for, at the sword we had to slay 17 of the same wyvern to build, at the ridiculously over-sized shoulder-pads we finally got in the 34th run of the same god-damned raid – we want them to look at these items, and at us, with awe. We want the private messages asking how we managed to procure them; we want the adulation of our peers as our names are whispered across Reddit by the envious masses who wish above all else that they were as motherfucking good as us.

But isn’t it just doing the same thing over and over again? Isn’t it boring? Well, technically speaking, yes. I mean, I’m not really achieving anything in the grand scheme of things. In the balance of the universe at large, it’s an utterly pointless exercise. But some would argue that so is life – and at least dropping a new legendary weapon, exotic Engram, or rare decoration makes me feel good. See, the Grind is about more than just repetition. It’s the combination of many endorphin-stroking elements that come together in the blood of the gamer to produce the purest and subtlest of highs. The Grind triggers our reward reflex again and again, floods our light-starved gamer brains with happy thoughts and, more importantly, gives us something to chase, dangles a honey-dipped carrot made of sunshine in-front of our faces and encourages us. It urges us on, and it always, always, rewards us in the end.

I mean, I do attempt to play other games now and then. My pile of shame could be used to prop up the Leaning Tower of Piza. And I always have every intention of finishing them, only to find myself heading back to the grindstone of Destiny, Warframe, Monster Hunter World, Diablo III. I’m not kidding. I’ve had friends sit in my house and tell me it’s straight up weird that I’m looping the same mission slash dungeon slash boss fight over and over again for a specific pair of yellow-highlighted pantaloons. But those losers don’t get it. If you’re a fellow fan of the grind game, then you do. You get it.

There’s an undeniable catharsis to repeatedly smashing through monster after monster, quest after quest, grinding that armour set, filling that bar. It doesn’t have the same instant gratification as a straight FPS, but the constant drip feed of tingly reward juice is far more desirable.

If you’ve managed up to this point to avoid the grind, I should be advising you to keep on rolling. Technically speaking, it’s not exactly “healthy”, whatever that means. But if you’ve spent hundreds of hours praying for RNGesus to bless you, if you’ve Prestiged 8 times and can’t honestly answer why, if you’ve run the same dungeon 127 times and still aren’t bored of it – or if you are bored of it but you still don’t want to stop – then carry on, fellow grinder. Earn that drop, max that level cap, craft that armour set. Games are built for you to enjoy – that’s their entire purpose. So enjoy them however the fuck you want to. Ignore the pile of shame currently making a play for the shadow-haunted rafters, and keep plugging away. I mean, it’s 2018, who wants to finish anything they start these days anyway? I for one would rather start something that doesn’t ever finish.

Senior Content Editor Mick has been playing games for over 30 years and writing about them for around 12. After drifting from site to site for a while, settling briefly at the now-defunct Made2Game and freelancing for the gone-but-not-forgotten NintendoGamer Magazine, he came at last to rest at Godisageek. Mick has been a reviewer, staff writer and content editor here for some time, while also moonlighting a little for Red Bull Games. He has 4 kids, has written 2 novels, and sometimes even manages to pay a bill or two. You'll usually find him defending the galaxy in Destiny 2, battling evil in Diablo 3, or lurking in the background on Twitter. Find him there @Jedi_Beats_Tank, or on XBL (JediWaster247), PSN (Jedi_Waster) or Nintendo (JediWaster).
MORE LIKE THIS
Baldur's GateBorderlandsdiablodiablo 3