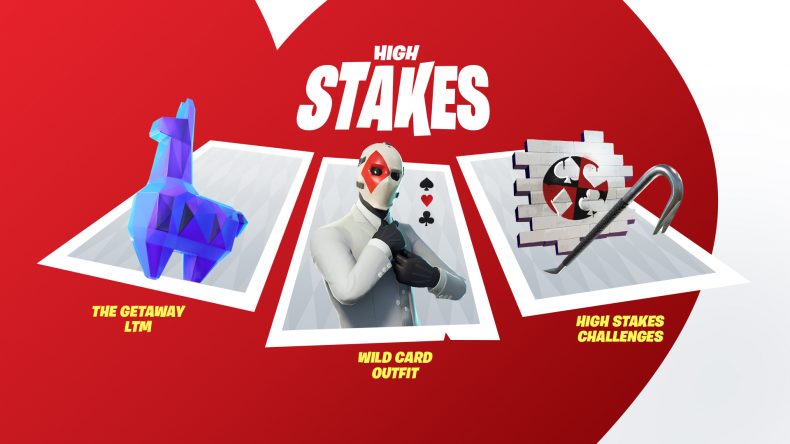 After a delay thanks to a critical controller issue, Fortnite’s Patch is now live on all platforms.

While the servers are still down (as of this writing), Patch 5.40 has a new LTM called the Getaway, the Grappler, and various Android and Nintendo Switch fixes and improvements. The Patch notes are below:

Welcome to The Getaway! In this mode, players will race to find a Jewel and take it to a Getaway Van before everyone else to win the match!

Jewels
Jewels can be found in special supply drop safes, located along the edge of the first storm circle. The safes take a long time to open, so make sure the area is clear before attempting to claim a Jewel!
Four Jewels will be in play on the map AT ALL TIMES. If a player escapes with a Jewel or one is lost in the storm, a new supply drop will bring a replacement.
When a Jewel is picked up, it will be visible on the map to everyone for 30 seconds.
Carrying a Jewel will give players health & shields over time, but also slow them down by 10%.
Getaway Vans
Four TOTAL Getaway Vans will be in the map, three that arrive early in the match and one more that shows up near the end.
Getaway Vans float in mid-air, Jewel carriers must build up and then interact with them in order to complete a Getaway.
The goal is to find or steal a Jewel and take it to one of the vans in order to secure a Victory Royale.
Once they arrive, safe drops and Getaway Vans will be visible on the map at all times.
12 red “Pursuit” Supply Drops land at the very beginning of the match. These carry a variety of longer-range weapons and other items, and are the only way to obtain the new Grappler in this mode.
Resource harvesting amounts increased by 50%.
Only Rare weapons or higher will be found in this mode.
Rifts, Rift-To-Go and Launchpads have been removed to reduce mobility for Getaway Van engagements.
Profile Stats (K/D & Wins) are tracked in this mode, but Umbrellas are not awarded for wins. Grappler added.
Fire at a nearby object to pull yourself towards it.
Can be found in Vending Machines, floor loot, Treasure Chests, Supply Drops, and Supply Llamas.
Chain multiple shots together to travel great distances.
Has 15 charges. Discarded when charges are depleted.
Epic rarity.
Vaulted Revolvers
Rarity color adjustments
Some items have been removed or modified to better reflect their effectiveness. This only affects their colors and other characteristics are unchanged.
Removed Common Suppressed Submachine Gun
Removed Rare Rocket Launcher
Availability of Epic and Legendary Rocket Launchers increased slightly to compensate.
Increased Epic Rocket Launchers drop rate by 18.57%
Increased Legendary rocket launcher drop rate by 2.05%
Removed Legendary Bolt-action Sniper Rifle
Removed Rare Pistol
Remote Explosives increased from Rare to Epic.
Port-a-Fort decreased from Epic to Rare.
Semi-Auto Sniper rifle decreased from Epic and Legendary to Uncommon and Rare.
Increased the frequency that the Semi-Auto sniper rifles drop to align more with their rarity class.
Increased Uncommon Semi-Auto sniper drop rate by 9.29%
Increased Rare Semi-Auto sniper drop rate by 9.29%
Dual pistols decreased in rarity from Epic and Legendary to Rare and Epic.
Suppressed pistol decreased in rarity from Epic and Legendary to Rare and Epic.
Burst Assault Rifle accuracy adjustments.
When holding down the trigger, the first 2 bursts are more accurate.
Spread down sights benefit increased from 35% to 40%.
Crouch spread benefit reduced from 25% to 20%.
Jumping/Falling spread penalty reduced from 25% to 10%.
Sprinting spread penalty reduced from 50% to 30%.
Increased drop stack count for Boogie Bomb from 1 to 2.
Increased maximum stack size for Stink Bomb from 5 to 6.
Increased maximum stack size for Shield Potions from 2 to 3.
Bug Fixes
Fixed an issue that prevented audio and effects from playing on other players who are consuming a shield potion.

In the moving storm phases, when the storm reaches its destination, it will cause a surge of energy that destroys player-built structures located on the storm wall.
Motion controls now function uniformly across input types on Nintendo Switch and mobile. Options have been added to the settings to allow you to switch your motion turn axis.
Motion deadzone has been removed.
Bug Fixes
Fixed an issue causing supply drop landing effects to play twice in some circumstances.
Fixed inconsistencies with auto-pickup when landing on pickups, and when pickups are first thrown from containers. Boosted volume of the Remote Explosives placement sound.
Improve the quality of the sound played when dropping from the Bus on Mobile/Nintendo Switch platforms.
Improve spatialization of the chest open sound for other players nearby.
Bug Fixes
Reduced the spam of item pickup “bounce” sounds when pickups are sliding down hills.
Fixed several UI sound issues.

Emote picker is now available in the lobby, no longer limited to just playing the first emote selected in your locker.
Fullscreen map now supports touch on Nintendo Switch.
Bug Fixes
Item shop now shows the item description when inspecting.
Road Trip week 8 and 9 display the correct completion value now.
Fixed issue where challenge bundles did not display the correct number of stars from the challenge tab.
Fixed issue where style preview would sometimes not be centered in the view correctly.
Banner rewards from the Battle Pass no longer show an empty description box.
Fixed an issue wherein rerolling a daily quest in Battle Royale would not select the new quest.
Style gift boxes will now show the 3D preview of the character with the style applied.
Fixed an issue where navigating in the locker would cause some drop in performance.
Fixed an issue where changing away from the Challenges Tab would cause some information to get stuck on the screen.
Fix an issue where continuously clicking on the “Select Game Mode” page would prevent it from closing.
Fixed an issue where using touch to open/close the map would cause d-pad controls to become unresponsive.
Fixed an issue with the loading screen showing incorrect information for non-leader party members.

Bug Fixes
Fixed an issue that could cause player models to not appear while in game.
Fixed an issue with spray quality temporarily appearing pixelated for some sprays.
Fixed the Downshift Glider rear light trails from clipping with geometry. Added VOIP to Android.
Expanded device support to the Essential-PH, Motorola, HTC, Sony Xperia devices.
Major memory optimization on Android devices with Adreno GPUs. This addresses the performance degradation seen due to memory pressure.
Implemented a new Audio Mixer, which addresses issues with sound quality and consistency.
Items on the ground now have tooltips.
Custom HUD Layout Tool now has a more consistent apply/cancel flow.
The player healthbar and squad healthbars are now moveable in the Custom HUD Layout tool.
Dragging-and-dropping an item from the quickbar now drops the whole stack. To split a stack, drag-and-drop with the inventory window open.
Dragging-and-dropping an item from the quickbar no longer stops consumable use.
UI prompts now appear on vehicles for entering and switching seats.
Bug Fixes
Corrected some issues with screen resolution in certain locales on Android.
The screen will no longer timeout without user input on iOS.
Adjusted steering sensitivity on vehicles.
Players are now able to thank the bus driver.
Gyro controls are now usable regardless of orientation on iOS.
Resolved an issue with turbo-building sometimes being stuck “on” when using the quickbar to turbo-build.
Fixed the challenges button to use large buttons on mobile.
Fixed an issue where toggling between pickaxe/weapons wouldn’t properly change weapons.
Exhaust problems with the Street Racer Bike Gliders for mobile have been repaired. The Bikes should run clean now.
No longer able to interact with UI behind the challenges screen.
Players who are experiencing issues with abruptly going to the Home Screen when pressing jump on certain Samsung Galaxy devices can do the following to fix the issue.
Go to Settings > Display > Navigation > Hard Press Home Button > Turn the feature off