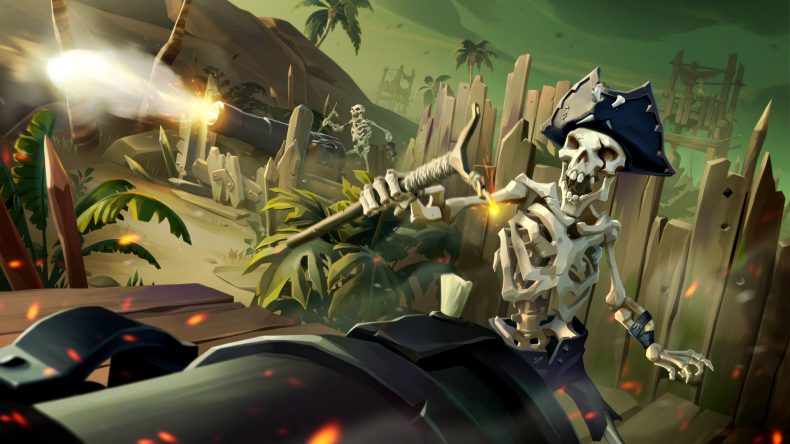 Cast your mind back to March 20th when Rare raised the anchor and officially let Sea of Thieves sail the seas on PC and Xbox to a group of hungry gamers ready to live out their piratical fantasies and steal all the booty their ships can carry.

There was criticism that the game was lacking in respects of things to do, while others don’t enjoy the type of game that involves a “make your own adventure” type deal, which is fine, everyone’s entitled to their opinion. However, in the space of the 9 months that Sea of Thieves has been sailing away, it has gone through a metamorphosis that evolved into the beautiful scarred and tattooed butterfly it now is.

For those that have never played it, or went back to SoT since its launch, I’ll give you an overview of what has changed since the beginning that’s made me stick with it and gave me a permanent pirate voice. The first set of free DLC was The Hungering Deep. We were treated to a quest from ‘Merry’ Merrick to find and kill the dreaded Megalodon as well as get a speaking trumpet (used to communicate with other players over long distances) and a new instrument in the form of a drum.

We were also introduced to the Bilge Rats, who frequent the pub, and update you on what time limited events are currently active. Saves having to trawl the internet for snippets of info.

Even though the event is over the Megalodon has stuck around so it’s not just the Kraken you need to worry about. Oh, and did I mention that even Sloops aren’t safe from the Megalodon? Found that one out the hard way.

Moving onto Cursed Sails, we see the addition of AI skeleton controlled ships. No longer is it other players that can hunt you down in their choice of ship but now the AI is at it too. The seas keep getting that little bit more crowded with each update. You also have the choice of going for a three player Brigantine Ship, so good news if you only have two other mates who are up for a bit of pirating. Or you can take advantage of the new alliance system and join with other players while keeping control of your own ship.

The advantage the alliance system brings is when you, or another ship in your alliance, cashes in some booty, skulls or a delivery everyone benefits and gains some gold and experience. We’ll all be pirate legends soon enough if we decide to take part in some jolly cooperation.

The biggest addition comes in the form of Forsaken Shores which adds a new section to the east called Devil’s Roar. If the name alone isn’t enough to get you intrigued then I guess I’ll go into a bit of detail.

Devil’s Roar adds a plethora of new islands to explore, but with the added danger of the majority having active volcanoes as part of the landscape. Spend too long on an island and you’ll likely be caught up in a volcanic eruption. If you do manage to avoid them you’ll still need to contend with geysers that’ll shoot you into the air, giving a nice helping of some fall damage, flying debris that can take you out in one hit and the sea around the island reaching boiling temperatures, gradually draining your health for the duration of time you feel like going for a swim. Next up we got The Festival of the Damned, a Bilge Rats adventure, adding a little something extra for players who are more KIA inclined. You had the option of speaking to the captain of the Ferry of the Damned when you’ve been taken out as well as collecting different coloured Flames of Fate in your lantern depending on how you went about your untimely death.

These different coloured flames were then used to light beacons, or change the colour of the ships lanterns if you feel channelling your inner Nick Knowles and renovating you ship.

As with each update the world is made a bit more dangerous and Festival of the Damned is no different. You’ll now be up against more violent storms as well as fending off the Kraken, AI controlled skeleton ships, other players and the Megalodon. Who said a pirate’s life was easy? Lastly we have the most recent DLC in Shrouded Spoils. We’re being treated to extra ship customisation for the wheel, capstan and the cannons. Now every piece of ship can look the part. We also have the Mega Keg, which is like the normal gunpowder barrel but now with triple the destructive power and radius. I foresee a lot of accidental deaths.

The Kraken has also been reworked to include the Kraken Slap, giving the option to smack you upside the head with enough force to erase from existence. Kind of like the Thanos finger snap but less impressive. You’ll also have to deal with more free roaming skeleton ships,which can be either passive or aggressive. Queue the panicked tones of players everywhere as they try to figure out if they’ll be left alone.

There is also the addition of fog, or harr if you’re up on your pirate lingo like our Nic Ardron. Nothing beats a bit of fog in the morning to give you the fear. Is that outline in the distance just a rock or is someone, or something, making a beeline to you with the intention of sending you to ol’ Davy Jones Locker?! We also see the return of the mermaid statues, giving you another opportunity to smash them up and collect some gems for a little extra gold, as well as a new “crate of ancient bone and dust” for you to deliver to the merchant alliance. Just be careful not to breath that dust in, it’s extremely musty smelling and will be caught in the back of your throat for weeks.

The fact that Sea of Thieves has been continually updated with numerous free DLC to keep it as fresh as possible as well as the dev team doing their best to fix any problems, while keeping in touch with players via the forum and dev video updates, makes it beyond worthy of another go.

The number of hours I’ve played this and had nothing but fun, whether that be in a sloop on my own or with friends or randoms, shows how good a multiplayer game Sea of Thieves is. Couple that with each play never being the same and you’re onto a winner.

I’m looking forward to see what else Rare bring to the game in 2019 and I can only hope my ramblings have, at the very least, encouraged you to consider grabbing a bottle of rum, putting on your best pirate voice and hoisting the anchor to give it another go to see how it has evolved.