Outward has a promising approach to survival, but lacks in the RPG department 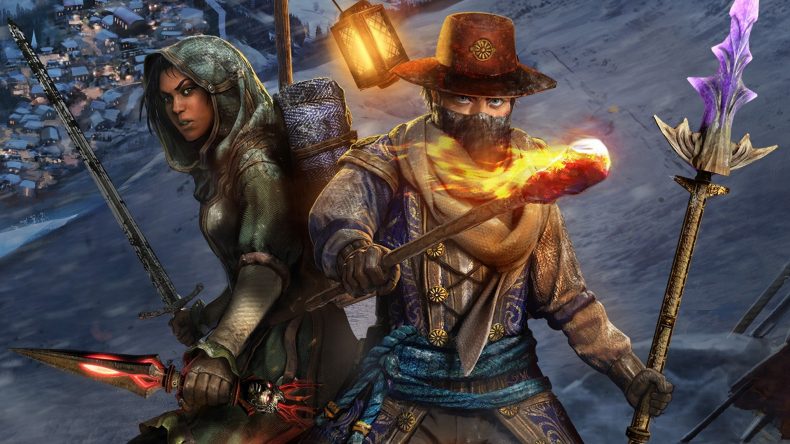 Adventure. Everyone looks for it at some point in their life, right? Some folks like to travel the world and find their adventures in a more literal sense, but those of us with less money tend to gravitate toward things like Skyrim, The Witcher 3 or an MMO like World of Warcraft. These kinds of games have skyrocketed in popularity since Skyrim took that Christmas number one slot back in 2011, but survival games have also crept into the public consciousness more recently, and that’s where Outward comes in.

You find yourself shipwrecked, washed up on a beach in nothing but your underclothes. A lit torch keeps you warm, but you’ve no food and the only water available is rolling up in waves over the sand. Let me tell you, sea water does nothing to quench your thirst, the salt only dries your mouth out all the quicker. Soon enough, you meet up with your old friend who has somehow washed ashore intact, and he invites you to sleep at his makeshift camp. When you wake, you find yourself at home in the lighthouse. Only it turns out that there’s a blood price on your family name and the only way to avoid being exiled is to pay it off in the next five days. It’s not exactly the most warm welcome to a fantasy RPG, but then Outward is just as much about surviving in the wilds, as it is about swords and sorcery. Though there is plenty of that, too.

Fortunately, there is a fairly comprehensive tutorial available, that will help you to understand exactly how the world of Outward works. It will walk you through the basics of combat and survival, through the ways to stave off heat exhaustion or extreme cold, and all the various ways you can craft and cook the things you need to keep you alive. Somewhat frustratingly, this tutorial is completely separate to the main game, instead of being intelligently slotted into the story. Most survival RPGs, or RPGs in general for that matter, will have you learning how to survive during the opening moments, so that you’re a little better prepared for the adventure ahead, but not Outward. Outward merely teases you with what you could have, in its tutorial, then sends you out into the main game with nothing. In fact, even hours into the game you probably won’t have anywhere near the same equipment as you did in the tutorial. I decided to pay off my blood price, by doing a few jobs for people around town. I actually only ended up doing the one, which led me to a dark cave filled with strange creatures that ran at me with tridents. I fought them off, but it wasn’t exactly easy. I feel like the combat, at least during the early hours, will be a stumbling block for many. Although it follows similar rules to the likes of Skyrim and even the Souls games, using a stamina-based system as well as blocking and dodge rolls, it isn’t quite as forgiving or balanced as those bigger budget games. This is partly down to problems with the combat itself, such as enemies being able to hit you through your attack animations, often faster than is fair. I would play the patient game, blocking or dodging as enemies went through their combo animations or their heavily-signposted lunges, but when I used the following moment to attack they would often already be launching another attack or be able to dodge. It sometimes left me wondering when exactly I was ever meant to attack, which even led to one moment where I was running down a mountain path with a train of around six or seven enemies chasing me, because I just decided that fighting wasn’t worth the hassle.

When you do get into a fight, which will certainly happen at some point in your travels, there is one mechanic in Outward that I thought was unique: your backpack. Like most RPGs, you can only carry so much in your bag, which is reasonable. Unlike most RPGs, however, Outward lets you drop your backpack at any point, which makes you much lighter and nimbler in combat, and makes for a much more tactical way to approach exploration. You can drop it outside a cave, going in with just your weapons and a lantern if you plan on being stealthy or simply want to get in and out quickly, just grabbing a specific item from inside. Or you can take it everywhere, maybe just set it down before getting into a scrap, if you’re a bit of a hoarder like myself. There are benefits to carrying your pack too, such as attaching your lantern to it in order to keep your hands free for sword and shield. Plus, you can carry all those sweet, sweet goodies that you will certainly need during your adventures. Quite honestly though, while this mechanic is interesting and unique, it’s just one of far too many. You have to watch your health (obviously) as well as your stamina, the maximum level of which drops as your character grows tired. You’ll also have to eat and drink, as well as fight off diseases that can randomly occur, which wasn’t really covered in the tutorial. That was just a delightful surprise that made its way into my adventure, when I was attacked by a hyena that was apparently diseased. This led to my health being drained over time, because I was lost in the wilderness with no medicine available to me.

So, on top of being diseased, I was completely lost because Outward is no friendly RPG. It doesn’t pretend to be, either. Your compass only tells you which direction you’re facing, rather than giving you any indication as to where your objective might be. Your map tells you the location of things you have discovered, but there is no “you are here” marker, so you will have to take careful note of landmarks as you travel, otherwise you’ll find yourself lost in the dark of night. And that is very dark indeed. If you’ve ever played Dragon’s Dogma, you’ll have an idea of how dark Outward gets. You really do need your lantern, but even that will only illuminate a very small area, and the same goes for caves and dungeons. Light and dark. Food and drink. Disease and death. Outward wants you to work for your success stories, and as a general survival adventure it works brilliantly. When I wasn’t trying to do a quest, I enjoyed running for my life through a world that wanted to kill me at every turn. Unfortunately, its actual quests are where it begins to fall down as a traditional RPG. Every time I found a new character or attempted to progress a story arc, I was greeted with a fetch quest or would have to go find another character and do something for them, before I could actually get to the latest fetch quest that may or may not result in progress. It grew tiresome.

As a survival RPG then, Outward may not be entirely friendly, but it does its job, and it does it well. Roaming the world is somehow still fun and interesting, despite a real lack of things to do, largely due to having to almost micromanage your own survival. If that was the whole game then I could see Outward being something new and interesting, perhaps a bit risky but you need to risk something in order to gain substantial rewards. Unfortunately, when the game tries to be a proper RPG it feels too by-the-numbers in its quest design and that leads to boredom, which is the exact opposite of what an adventure should to be.

Time will tell if Outward can do something about that, before it launches on March 26th.