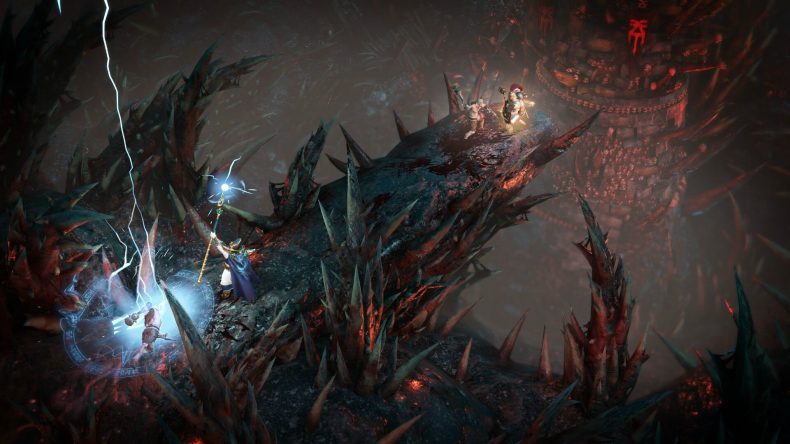 They say imitation is the sincerest form of flattery, but for as good as Diablo 3 is, Blizzard’s slash-happy loot-a-thon doesn’t have much in the way of competition. Step forward Big Ben, and the newest title in the Warhammer universe: Chaosbane, where the theming is definitely Warhammer, but the stylings are unmistakably Diablo. That’s right this is a game that’s all about the numbers.

You’ll stroll around hitting things to make numbers come out of them, then pick stuff up or loot items from chests to increase your stats and make the numbers bigger. And despite all the number crushing, the hordes of chaos will still insist on getting in your face. You’ll hold X to attack and intersperse this with the other face buttons and triggers to use your chosen avatar’s skills for more efficient death dealing, so, very much like a Certain Other Dungeon Crawler. However, unlike Diablo 3’s mute, nameless avatars the characters in Chaosbane talk to the NPCs that dole out the quests, which, despite being voiced in American-styled medieval lilts, does make it feel more like you’re taking part in the story, which Diablo’s cutscenes did a very good job of pulling you out of before thrusting you into the fights. Here, cutscenes are still images drawn on parchment, but interactions are fully voiced between player character and the NPC. Making up Chaosbane’s character roster are four classes; the Empire Knight, High Elf Mage, Dwarf Slayer And Wood Elf Waywatcher, but only the Knight And Mage are available in the beta. The different classes are divided into Tank, DPS (Damage Per Second) / Crowd control, melee DPS and Ranged DPS. I took the option to play as the Knight because I just like being in the thick of things ever since I first booted up World of Warcraft, but all things considered you shouldn’t have too much issue with finding yourself a class that suits how you like to play. The Mage, for example, is your typical glass cannon, but he can do some cool things with the elements that you won’t have seen before.

The beta wasn’t exactly short despite being confined to the opening of the game, your character being tasked with repeat journeys into the Castle’s sewers to help stem the tide of enemies from a Chaos cult who recently invaded the castle and put the king in a kind of stasis. I’m not sure how the world of Warhammer was created, but these sewers seem to have been built above bottomless pits, which is a rather baffling design decision in a time considerably backwards in technology. These repeated trips are filled to the brim with fodder to turn into mushy pulp with your ever growing array of skills. New levels give extra skill points which unlock further abilities, and as you progress you unlock better versions of them which require more skill points to equip. To begin with, you won’t notice too much difference in damage output from new weapons, but as soon as you tack on an improved skill you’ll certainly notice things dying a hell of a lot quicker. The thing is, as good as the grime and putrid nature of the sewers is rendered, the constant trips back down into these grotty catacombs did become tiresome, and I started wishing for a change in location. While there’s one point where I finally ventured to an outside area, it was unfortunately short lived and I once again found myself ankle deep in fecal matter and impish corpses. But, when you’re duking it out with a combat system that just works it’s hard to care about where you’re doing it. I love Diablo 3 and Destiny for both their mechanics and the way the loot systems make you feel powerful. Here again, a mission rarely ends without you getting an improved item for an equipment slot, and coming out of a rush of chaos grunts in a barrage of yellow numbers feels oh so good.

One thing that is missing though, is a goofy element, as Chaosbane is much more po-faced than Blizzard’s work. I guess you could liken the voice performances to an element of comic relief, but they feel more like a Shakespearean actor trying his best to elevate the local council’s nativity play than something done in a tongue-in-cheek manner. Then think of how Diablo made you feel when you happened across an enemy with a giant yellow name like ‘Thaurgnar the Regurgitator’ above it’s head, knowing you could get some good loot from it. Those silly names made defeating them feel much more fun. Granted, Chaosbane is its own game and shouldn’t try to ape Diablo 3 in every aspect, but if you’re going to wear your influences so visibly then you should pay attention to all the elements people loved so much. This is a beta though, and there’s still time to improve on an already impressive foundation. There are some sound bugs with dialogue overlapping and the odd audio pop and the occasional frame rate drop, but generally this is a solid package even for a beta. The game’s not due out until June so there’s at least two months until it goes gold for release, giving Eko Software time to add a bit of polish – and you can be part of it with more beta periods to come. Eko are the guys behind the Handball sports games, and some games you’ve probably not really heard of – but don’t let that put you off. From what I’ve played, this could be the game that puts Eko Software firmly on the map, and I look forward to playing the full release.

A lover, not a fighter and an all round good guy (he would say that, he wrote this after all), he's happy to be here as part of GIAG.
MORE LIKE THIS
Bigben InteractiveEko Softwaregames workshopWarhammer