previous
HUMANITY Coming to PlayStation 4 With VR Support
random
next
The Last of Us Part II releases on February 21, 2020
0 comments 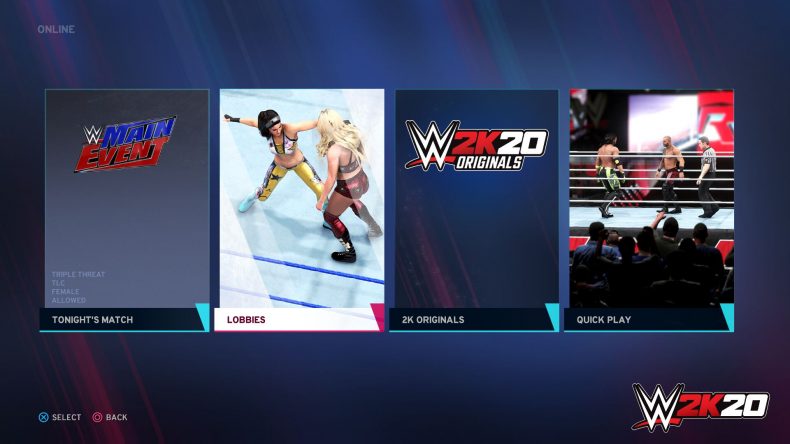 Today, 2K has announced a plethora of online features that’ll be appearing in WWE 2K20, including the return of online lobbies. For those of you who enjoyed the online lobby system from last year’s WWE 2K19, they’ll be returning in WWE 2K20, helping to streamline the process of pairing up players and getting them into a match as quickly as possible.

Creating a lobby will let you fine tune the type of match you want, allowing you to select from a wide range of match types and rules with up to six players. Arenas, Superstar gender, and whether you want default or created Superstars can be selected. If you just want to get into a match as quickly as possible, you can browse all available lobbies and select one to jump right in, as long as it has one or more other player involved.

As previously announced, male and female MyPLAYERS are a part of MyCAREER, extending to Road to Glory and MyPLAYER Towers. You can unlock items and level up through all three of these modes, which is nice. For the first time ever, anything you unlock in these modes will be available in the general Create-a-Superstar mode. You’ll also be able to export the appearance of your MyPLAYER to the general character creations as well. Road to Glory events will include female matches for the first time ever, so if you enjoy the process of earning stars to enter these special pay-per-views, you’re in for a treat.

A brand new feature to Multiplayer will be the ‘Tonight’s Match’ feature. This Match Challenge will be refreshed daily, rotating through various match types, rules, genders, and arenas to keep it fresh. The Road to Glory Featured Match will be similar to Tonight’s Match, but it’ll include potential Triple Threat, Fatal 4-Way, and 6-Way Matches, toggling between male and female so that both of your MyPLAYERs will get regular rotation.

Finally, these Daily Challenges will incorporate elements from all new WWE 2K20 Originals post-launch downloadable content, whether you’ve purchased it or not. For example, if you’re playing through a MyPLAYER tower, you may bump into FrankenStrowman or wrestle in the Wyatt Swamp Arena.

Video games are cool. Don't let anybody tell you any different.
MORE LIKE THIS
2kWWE 2K20