Planetside Arena is a battle royale with potential, but it needs work 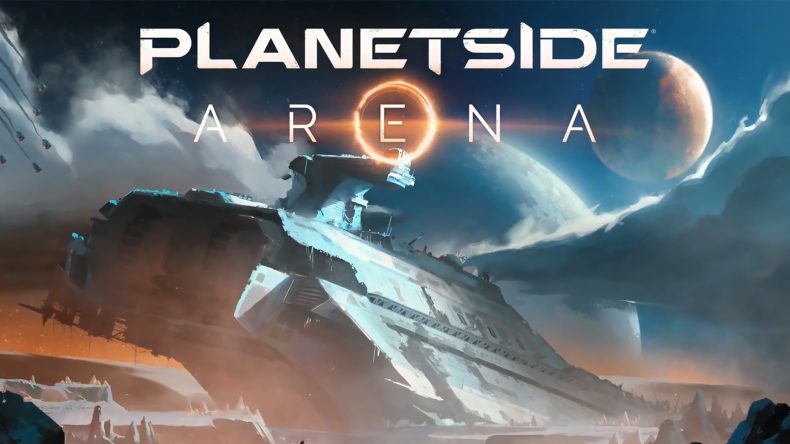 I know my way around a battle royale, but I must admit that my first foray into Planetside Arena was a bit of a confusing mess. There were large squads that simply abandoned one another the moment their drop pods hit dirt, there were Destiny-like hover bikes that could be summoned at the touch of a button, there were orbital strikes that instantly killed anyone unfortunate enough to be caught in their blast radius, and there were even tanks later on, for some reason. I was left utterly bewildered.

Before dropping on a random location, you spend time in the hangar of a starship, practicing your aim alongside your squad as the server populates. You can try out each of the three classes, fathoming out their individual special abilities and generally trying to work out how to play the game. Once you’re dropped planetside, that’s when the confusion begins. Unlike other battle royale games, you start already tooled up with weapons, instead finding upgrades around the map, as well as nanite. I initially had no idea why I was collecting this stuff (the game tells you nothing, going in) but eventually discovered that it could be spent during the match to gain access to rarer loot or even to respawn fallen teammates. I’d never played Planetside before, which is apparently known for its massive-scale battles with hundreds of players. Dropping into Planetside Arena’s squads mode, with up to 25 teams of 12 all competing for position on the huge map, up to 300 people battling it out to stay in the ever-decreasing circles, is as chaotic as it sounds. Especially when orbital strikes and tanks are thrown into the mix. Even in early access, I was still impressed by how well the servers handled it all. I experienced no lag at all during my time with the game. I never actually saw a full server, but that’s likely due to it only just going free-to-play in Early Access.

It’s clear that there is still work to be done on the game, too. While there are plenty of rewards to be unlocked through loot boxes (yes, I’m aware that’s basically a dirty word, these days), duplicates are pretty common. Too common. The code we were given gave us access to the Legendary Edition, which unlocks 200 standard loot boxes to open up. Duplicates were already showing up within the first 15-20 of those boxes and, although I didn’t record the exact numbers, I would say that around half of those first 15-20 included at least one repeat offender. Those are some poor odds, which continued throughout the 100 or so that I opened. There’s only so many times you can watch an excitable robot unpack those things.

Unlocks in loot boxes aren’t just cosmetic either, as you can find weapon and suit mods that offer combat bonuses in-game. Not to mention new weapons with small improvements to their stats. Nothing too drastic, but it’s difficult to excuse any kind of advantages being dished out in this kind of game. Hopefully this is the sort of thing that this Early Access period will help to fix, but I’m not sure it’s something that can simply be removed from the game without major changes throughout. Advantages can even be gained when you’ve dropped into the game. I’m not talking about the weapon upgrades you find in lieu of actual new guns, but things like armoured vehicles and actual tanks. Yes, tanks. These appear part way through matches and usually change everything. Not necessarily for the better. Not just because you might be on the receiving end of a tank’s shells, but because it feels completely unbalanced.

This is partly down to the player base being made up of already seasoned Planetside players, and partly down to the way you’re already tooled up before you even land on the battlefield. Battle royale games are often fun because everyone starts with nothing, but Arena sending players in with a full (and often upgraded) arsenal, then adding in tanks and vastly overpowered abilities like orbital strikes, just isn’t friendly to new players. Being able to go in with unlocked mods and better weapons just makes it even more beginner-unfriendly. There’s a very real danger that Planetside Arena will become a pay-to-win game and that is something Daybreak Game Company will need to address.

The actual gameplay is solid, which makes it doubly frustrating when the game is so impenetrable. It’s not pretty, looking like an early 2000s PC game, but the map does have plenty of different areas to explore and fight through. When playing, each class has its own special abilities on the F and 5 keys, such as the engineer’s auto turret and deployable shield or the medic’s healing bubble. A good team will use these things and combine them to devastating effect, and teamwork is essential, making it all the more annoying when your teammates run off in separate directions and then wonder why they’re not doing very well. Planetside Arena is frustrating to play at best, completely unbalanced and impenetrable at worst. There’s potential for a good, new take on the battle royale formula, but not while the game offers paid advantages that remove all accessibility for new players. If you’re a Planetside player already, you’ll probably be right at home in Arena, but if you’re not, you’ll probably struggle. That’s what Early Access is for, and hopefully Daybreak Game Company uses the period to smooth out the problems and make Planetside Arena the fun shooter it could be. That’s how it will gain the wider audience that a battle royale game needs to survive.

Planetside 2 Launches On Playstation 4 In June