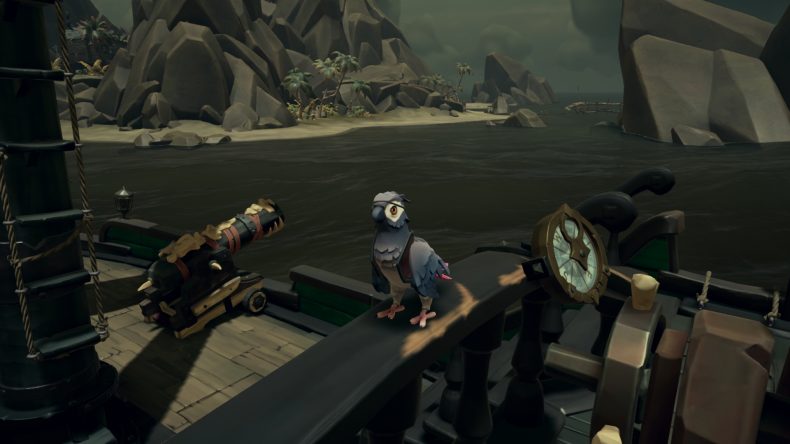 So, in the past week or so I have “done a micro-transaction”. I fully recognise that I am indeed part of a perceived problem that persists in the gaming world at the moment. But, I’m not sorry. Not one bit.

For anyone who knows me, it won’t take too long to guess which title has finally managed to make me (an honorary Yorkshire woman) part with her hard earned cash… Yes! It’s Sea of Thieves. Fellow gamers, I have purchased a pet to travel with me as I do pirate things in Sea of Thieves. She is a pretty parakeet called Viola and I love her and would die for her. To be honest, I actually have died for her as I spent far too long trying to get her out of her cage on my sloop as another crew was pelting it with cannon fire. Whilst engaged with that, trying in vain to get the “pick up pet” prompt in that ridiculously cluttered space on the sloop, a dastardly pirate boarded my vessel and ganked me in the back like a true and noble hero. I just hope Viola managed to fly out of that gilded cage of hers as I faded to black and my boat sunk to the depths. Fly free, my pretty!

I did resist the lure of a pet in Sea of Thieves when they were first introduced, because if I’m honest I was in a bit of a huff that I couldn’t just buy what I wanted. Ancient Coins have been added to the game, a new currency used exclusively in the Pirate Emporium, the new vendor located above the Order of Souls in any of the outposts. My pretty Polly cost 499 coins to purchase, but then I saw that I could get her a little an outfit – an eye patch and a little waistcoat! OH MY GOD how cute she is, so of course I had to get that too. All in all to get my beauty and her outfit I had to purchase the 1000 coin pack and I now have around 300 coins left over, because of course I do. Fortunately though, I do have a chance to earn more coins in game should I happen upon an Ancient Skeleton bearing a sack filled with this currency and I manage to kill him. And, if I do ever find one, I might just have enough coins to buy something else. Oh, and what fun I have had with her. In truth she is largely useless. She flaps about a lot, screeches whenever anything remotely dangerous happens near the ship and tends to sit around preening her feathers. She’s a very pretty girl. She’s also a greedy mare! She eats a whole pineapple in one go! Does she not know how scarce that particular fruit is? Only the best for Viola though, and any way she tends to vomit all over the poop-deck if I give her a worm.

So far with my little feathered friend I have had numerous photo shoots, even dressing my pirate in clothes that complement her plumage (no Parrots were harmed in the making of that hat), entered her into a “prettiest pet” competition to win yet more micro-transaction loot, and fired her out of the cannon several times (Erm… O…kay – Ed). I’ve danced with her, played her a tune on the hurdy-gurdy, settled down to a nap with her, and taken her on many voyages with me. I know that none of that sounds even remotely exciting, and yet like much of why I adore Sea of Thieves and can’t quite put my finger on, I’m having a lovely time with her. I’m still disgruntled that I have to purchase a pack of Ancient Coins, rather than just buying exactly what I want to buy, but Sea of Thieves has given me countless hours of joy over the past 18 months or so that I can’t stay mad for too long. Basically, what I am saying is: Guys! I have done a micro-transaction, and I can’t guarantee that I won’t do one again! I mean, just look how pretty she is.

Likes to shoot stuff and wear pretty shoes. Is a BEAST at Titanfall.
MORE LIKE THIS
microsoft game studiosMicrotransactionsRareSea of Thieves

Ori and the Blind Forest Review