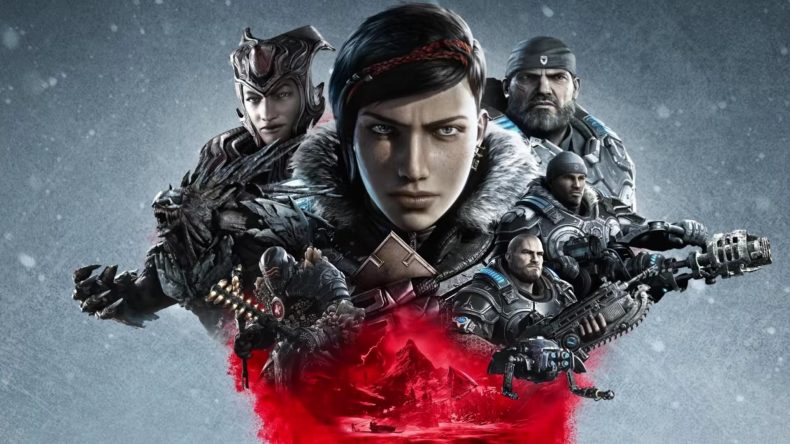 Having been incredibly late to the Microsoft party, and only having my Xbox since the start of 2019, it’s fair to say I’ve missed out on some big games. Entire franchises, in fact, have passed me by, the likes of Halo, Fable and yes, even Gears of War. But thanks to the insistent badgering of my fellow Geeks here on the site, and because of the wonders of Game Pass, I took the plunge with Gears 5. And frankly, it’s been marvelous.

The first thing that became abundantly clear to me is this isn’t one of those simple shooters that you can jump into willy-nilly. No, as sometimes isn’t the case in this genre, that 5 in the title actually means something. Indeed, four previous adventures with characters, story arcs, mishaps, and revelations have gone before. And those previous exploits and story beats aren’t recalled just for nostalgia purposes, no they’re relevant, poignant, often paradigm-shifting in the way people think or feel.

Following advice, I watched a Gears of War 1-3 recap before even starting up Gears 5. Hopefully then the “previously on Gears of War 4” section in-game would make sense. And it did, but I really wasn’t expecting not only the depth of narrative, with all its twists and turns but also the scale and scope of some of the adventures. Entire civilizations vying for power, constantly shifting focuses, and the type of surprise deaths that would make George R. R. Martin blush. There’s clearly lore here, characters with emotions, backstories, changing relationships, and that’s interesting, very interesting. I had to keep reminding myself, this is a shooter. So I’m all clued up(ish) on previous shenanigans, and I settle in for what’s to come. I was half expecting, half-hoping, to be impressed. The recap videos hinted at greatness, but their summaries naturally skimmed over some key moments. Suffice to say those moments hit, and hit hard in Gears 5. You play through as Kait – an excellent protagonist –  as she struggles with her past and present predicament, and you really build a bond with her. Through her eyes, you discover more about what’s going on piece by piece, whilst still being left suitably in the dark regarding the later, bigger reveals. I switched allegiances numerous times thanks to new revelations, delivered well thanks to the superb writing, and believable character portrayals.

Spending so long talking about, essentially the non-shooting bits in a shooter, sounds a little daft. But that’s because they’re not just filler or a distraction in between where the real action is. If anything they provide a perfect compliment to the adrenaline rush of gunning down hordes of enemies. It gives your progression purpose and relevance not often seen in shooters. Sometimes this genre has levels that are thinly strung together with weak exposition, and we all wait to get back into the main gunning action. However, Gears 5 has you enjoying those quieter moments just as much.

But let me be absolutely clear: the shooting in this game is sublime. Shotguns annihilate up close, and long-range snipers pack a punch, with a recoil that feels weighty and satisfying. The mid-range traditional Lancer does a gratifying amount of damage, and let’s not forget nothing is quite so satisfying as using that handy chainsaw attachment to literally tear enemies a new one. The various onslaughts often can’t just be dealt with through run-and-gun bravado though. As I’m sure veterans of the series are aware, cover is your friend here, and often I was scoping out cover all around me. I was always looking to get the best angles on my enemies, to flank and surprise them wherever I could. Even simple reloading is a minigame in itself with a perfectly timed button press giving you a super-quick reload to get back in the action. Mistime it, and not only am I left open to attack, and my ammo indicator flashes red, but Kait often chirps up with a derogatory quip just to make matters worse.

There’s just so much going on, demanding your attention, that it can feel overwhelming at times, especially when newer, more powerful enemies are introduced. But like the best games, it rewards your patience, focus and dedication to outwitting and outmaneuvering your opponents. You’ll try again, and want to go again, as the action is so thrilling, and the story that intersperses it is so engaging. And I haven’t even mentioned the campaign’s trump card, and that is your robot, sidekick, Jack.

Jack serves as a literal jack of all trades, as he switches between the additional gunner, medic, skeleton key, even traverser of small tunnels, depending on your needs. I love Jack and not just for his weird relationship with Del. Jack’s abilities provide a multitude of uses, some to overcome specific obstacles, whereas others can be the difference between life and death in a heated gunfight. His Stim ability saved me more than once from an early grave and it meant he really felt like part of the journey despite not being a fleshed-out character.

Another part I loved about the game was the side missions, because they had a double-benefit. Completing these optional quests would often yield ultimate upgrades for Jack to use, which is always a plus. But, frankly, the side missions gave me a great excuse to explore the world Gears 5 had set before me. These large sprawling areas were begging to be explored, and I would find points of interest and piece together what had happened. It’s a refreshing change of pace from closed, tight corridors and rooms littered with enemies and flying bullets, providing a grand sense of freedom and exploration, almost RPG-like in its execution.

And it would be remiss of me not to point out as I gush over Gears 5 just how damn pretty this game is. From the guns looking gorgeous in-hand, to the detailed character models looking lifelike and full of emotion and purpose during the various cutscenes. And the open-world areas look particularly stunning as you move through them at pace with your skiff. Sunlight would glisten off the ice or pierce the sky in the hot desert areas. It runs smooth as well, with barely a hint of any slowdown.

I think it’s fair to say then, that I’m a fan of Gears 5. It surprised me a lot by not simply being the brown burly shooter I’d made it up to be in my head. Once I’d taken the time to explore its depths, I found a world alive with characters and backstories that were packed with intrigue. The shooting was excellent, and the world within which it is set was beautifully laid out begging to be explored. Gears 5 is so much more than a shooter, and I’m glad to say it’s a series I’ve finally tried, and I can’t wait to play more of it.