previous
Thronebreaker: The Witcher Tales is out on Nintendo Switch
random
next
Thank you bonuses are coming to GTA Online and Red Dead Online
0 comments 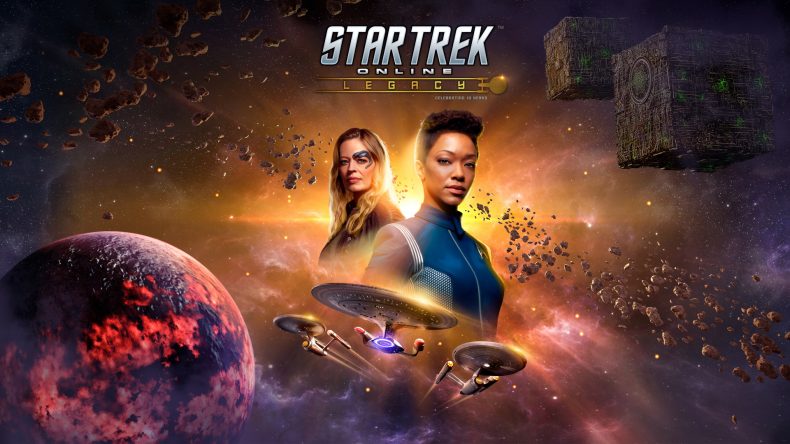 Ever since Star Trek debuted on our TV screens over 50 years ago, the science fiction drama has spawned countless television shows and films, as well as video games, audio dramas, and more. One of the franchise’s most popular characters is undoubtedly Seven of Nine, the former Borg drone who made her first appearance in Star Trek: Voyager. With the brand new Star Trek series Picard starting recently on Amazon, we got the chance to catch up with Jerri Ryan, the actor responsible for bringing Seven of Nine back to our TV screens as part of the show. Not only that, but Jeri Ryan has been working on Star Trek: Legacy, a brand new update coming to Star Trek Online to celebrate 10 years since the game launched.  We asked her about reprising her role once for Picard and Star Trek: Legacy, how she was approached to star in Star Trek: Nemesis, what it was like wearing the Borg costume, and much more.

Is it nice to be back?

Yes, it is nice. I loved how the character has developed, and it’s going to be fun.

Is it a surprise to be playing Seven again, not just on TV, but in Star Trek Online?

It is. I thought that, 20 years ago – 17 years ago – that that would be it. I said goodbye to her, I thought we’d told her story and we were done with that. But I love what they’ve created for her, who’s she’s become, and how resilient she is to everything that she’s been through, which I can’t tell you about [laughs]. Yeah, she’s really cool.

Last year, you contributed some extra bonuses, and voice overs for the game, like exploration narration. Are we going to see you popping up in the months to come?

I don’t know, I haven’t finished recording everything yet. Obviously, without giving anything away, you said the character has changed. In what ways has she changed?

Seven’s very different. She’s been through a lot of bad, dark stuff in the last twenty years. She’s a lot more hardened, more cynical, I think. She’s been working independently with a law-keeping group because the galaxy’s a mess and she’s trying to find some order.

Last time we met her, she had been a member of Starfleet, so she hasn’t returned to Starfleet. Her relationship with Chakotay. What do you think happened there?

How about the rest of the Voyager crew? We’ve seen cameos of Admiral Janeway on screen over the years. Will we see anymore without giving anything away?

I don’t know, you’ll have to wait and see. Speaking cosmetically, you get to wear some proper boots this time. is there anything you miss about the catsuit?

That catsuit was an amazing costume – striking, visually – it was an amazing feat of engineering. It was very of its time. It was the 90s, and an entirely different time. This is more appropriate, and totally what this character should be wearing given what she’s doing with her life, where she’s been, what she’s been through, and who she is right now.

Was it tough getting the full Borg make up done?

Yes, I’m not going to lie, it was rough. And I never knew they would write a Borg flashback episode, so it was like, “oh, God. Not again!”

So who would win in a fight between Seven of nine and Chakotay?

I’d kick his ass. She was a Borg a lot longer than he was.

I’m sure the fans will be happy with that response. Speaking of the fans, have you noticed a difference between the UK audience and US audience and your fanbase across the channel?

I know there were rumours about you joining the cast of the Next Generation at one point for the Nemesis movie. Was there anything behind those?

I think it was Nemesis – whatever they were shooting right when I finished Voyager, and they wanted to put me in the movie because she was a popular character. Someone called me and approaching me, but it was like, ‘why? There’s no reason from a story point for the character to be in it.’ Originally, they wanted her on the Bridge – in the crew – but it just didn’t make sense for the character, the story, or for anything. Bringing her back now makes sense for the show. Seven and Picard have a shared Borg history. It’s pretty interesting.

I think the game itself is great because it’s plugged a lot of gaps story wise, so people that don’t necessarily know, we get to see the Voyager crew – we get to see Seven of Nine quite a bit in the game – after what happened at the end of season seven. Have you had a chance to play the game yourself, or play through those moments and experience them? Are you much of a gamer yourself?

No, no. Not really. I’m too OCD. If I played a game, I’d get obsessed with it and do nothing else. I have to keep away from that.

As a creative individual, what has been the most fun to do in Star Trek? Whether that’s the TV shows, old or new, or working on the game?

Honestly, Picard has been super fun. Revisiting this character and the way she is now. Getting to reconnect with old friends. I mean, Jonathan Frakes is a dear friend, and he directed an episode. It’s been terrific. I’m getting to know her again, and I’m actually enjoying playing her more this time around. It’s been a better experience in general. I was going to ask about Jonathan Frakes. You must have met him through the show. How is it working with a friend who has been in the same thing as you, but from a different perspective?

It’s fantastic. I’ve met him over the years because once you’re in the Star Trek family you sort of encounter each other. Then he directed me in a show called Leverage, so I knew how lovely he is to work with and what a great director he is. When he told me he was doing Picard I was thrilled because I was terrified to come back. I knew that I was going to be in good hands because he has the same connection to these characters and this world, so I knew he would be the best man for the job.

You must have some on-set banter stories – some anecdotes from filming?

You know, a few. It was fun the first time I had a scene with the consoles on the ship. On Voyager, I did four years on sets that were beautiful, but you know, it was 20 years ago so the technology was 20 years old. They looked pretty and they lit up, but that was all they did – they didn’t really do anything when you touched them. We were rehearsing, and I walked up to the console and started pressing buttons, and the things were actually doing stuff. I completely broke character, got excited and started screaming. It just caught me off guard – I wasn’t expecting it.

That’s the thing, though. In Star Trek, the technology used 20 to 30 years ago is what we use now.

Can you give us a hint of what to look forward to, whether in the show or in the game?

Video games are cool. Don't let anybody tell you any different.
MORE LIKE THIS
Star Trek