previous
World to the West Review
random
next
The Walking Dead: A New Frontier – Episode 5: From the Gallows Review
0 likes 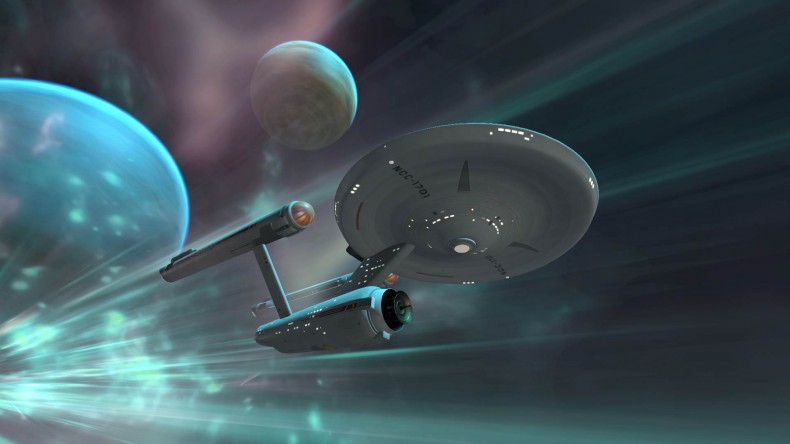 Star Trek: Bridge Crew is quite the daunting experience at first, especially when you’re going into it without the nostalgic twang thanks to being a Trekkie. Upon selecting the tutorial you’re met with a huge amount of information. Luckily all of it is explained to you by a very kind gentleman on the giant screen at the front of your simulation ship.

In between the dialog you’ll have a chance to put what you’ve been told into practice. In doing this it means you leave the tutorial with a genuine understanding of what is expected of you in each of the four command stations. This will be vital in your adventures as it could be the difference between your ship becoming a burning wreck or a thing of legend.

The four command stations consist of captain, engineering, tactical officer, and helm. The first on the list is the most vital in the game and the one that is handed the most control and responsibility. As a captain you need to make sure the ship stays organised. When you’re commanding AI this is a simple, albeit slightly fiddly affair. When human players are there, though, you’ll need to be vocal and clear with your commands whilst making some tough decisions. Engineering is in charge of power allocations and repairs, which will be important if you want a bit more speed to the engines or a bit more oomph to the shields. Tactical is the brawn of the outfit with the power to turn the shields on and off, fire weapons, and analyse targets. Finally you’ll be relying on helm to get you from A-to-B and maneuver you out of tricky situations.

It’s easy to develop an understanding over what you need to do in each role, although it will take a few missions to feel comfortable with it. The DualShock 4 method of control works but feels clunky. If you have the option you should embrace the Move controllers. It’s easy for them to break the immersion as well as improve upon it (considering you appear to be double jointed and able to rotate your wrist 360 degrees) but it feels much cooler pointing at something to “make it so”.

It also makes it feel like you’re actually in the environment when you’re not messing around with them. Your ship is littered with personnel and gadgets, but with your movement limited to your chair the level of interaction is key. It feels satisfying rerouting all power to the shield when a heavy attack is incoming. Intensity levels rise as you creep closer to an enemy target, hoping to get in range of scanning it without detection. As you try your hardest to find that balance you’ll soon find yourself absorbed. When I started the game I told myself “I won’t roleplay this”, but my first interaction with someone online saw both of us talking to each other in character. I even did the Picard “engage” hand movement and delivery at every opportunity I had. As someone that has only a fleeting interest in Star Trek I can’t help but imagine the glee the game could bring to a die hard fan.

Therein lies the beauty of Star Trek: Bridge Crew. It’s a game so lovingly made for fans which still delivers a strong experience for the general gamer. Its voice acting is strong, graphics are decent, and the missions capture the wonder of space and fear of battle well. The main story missions in the game are there to help you get used to playing it and they do so in a way that challenges the player and sets up some lovely moments of combat. The fear of being in an enemy area, not knowing where their ships are, and hoping you can complete your mission before they hit you is a wonderful rush. After you’ve finished the main campaign you can progress onto the Ongoing Voyages mode, which randomly generates missions of various types for those that like to be surprised. The urge to play these missions will rely heavily on the online community and the quality of the servers though. I had no issues with connection but, due to it being pre release, there weren’t many people online. I was able to get a crew of two and still had a great time. As a solo experience it was reasonably fun but it’s definitely at its strongest online and hopefully that community will be there.

If you have a virtual reality headset and you’ve always dreamed of being aboard a Star Trek starship then it’s a no brainer. It has a learning curve that may take you a few hours to get to grips with but don’t let that put you off. Sure, the Move controllers aren’t the greatest, but they assist in providing a level of immersion that will make you geek out a little harder. Even if you’re not a Star Trek fan this is still a game worth considering, especially if you’re after a social virtual reality experience. Just try not to become a redshirt.

Even if you’re not a Star Trek fan this is still a game worth considering, especially if you’re after a social virtual reality experience. Just try not to become a redshirt.