The Walking Dead: A New Frontier – Episode 5: From the Gallows Review 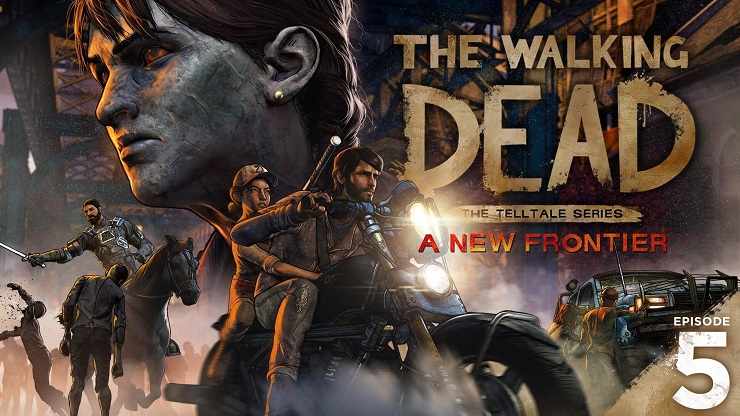 The Walking Dead: A New Frontier has been the quite the ride. It was never perfect, and much of the ambling narrative and slow burning story ended up panning out rather well. It wasn’t a patch on the first two seasons, but it managed to make you care greatly for the characters, and give us an interesting focus on sibling rivalry in the shape of Javi and David. However, for the final episode, it both peaks and dips in such an unfortunate way. There’s a scene in From the Gallows that works so well, and does a great job of culminating everything we’ve seen happen between the two brothers into an emotionally fuelled showdown between the two of them, only for it to be ruined by a watered down and weak penultimate moment you can’t help but feel insulted by.

With the intense finale of Thicker than Water, Javi is left wondering if Kate is lying dead in the truck that exploded into Richmond’s walls. With all Telltale games, there’s a chance you haven’t made the same choices as me, but in the closing moments, I shot Joan in the face after she gunned down Ava in front of my eyes. I haven’t regretted any decision I’ve made, but that one was hard to take. She shot Ava even after I chose to save her, tricking me and forcing Javi to live with the person he chose to kill: the loveable oaf Tripp. In From the Gallows, you face the aftermath head on, and it’s difficult looking the one you chose to die in the eyes. Telltale make it as awkward as possible, but thanks to the franticity of walker’s assualt on Richmond, friendships have to be reformed and mistakes have to be forgotten. It’s easier said than done because many people are pissed at you for causing the city to be overran. Strangers lining the halls of the apartment blocks scornfully watch you walk past, and children are scared whenever they see you. Some of your friends are furious with you, and in one particular scene, it’s up to you to diffuse a rather stressful situation that gets out of hand fast. Your brother David can be a huge reason for emotions to flare up, thanks to his miltant and cold view of everything, and with his suspicions growing about Javi and Kate, he’s a timebomb waiting to go off. David is the most interesting character in the whole of Season 3, even if he isn’t probably the nicest.

He’s struggling with being a father, trying to rekindle his relationship with Kate, but his absence has turned him into a stranger, with Gabe seeing Javi as more of a dad – something that hurts David greatly. Things really come to a head between David and Javi, and you are given a great flashback of when the two of them found out about your father’s cancer, and both how and when they found out. There’s a chance to make a promise to your dad about what happens between the two of you after his death, with the promise you make to your dad making an important comeback towards the end of the episode. They’ve not had the best relationship throughout the series, and when things reach a climax, you have a chance to do the right thing and find absolution in the madness. Clementine has been a supporting character in Season 3, but she’s always been one of the most important. In the last episode, we saw her share a special moment with Javi that showed us she’s only young, but also the roots of her teenage years and how she’s slowly turning into a woman. By the end of From the Gallows, it hits you: the little girl we’ve grown up with isn’t so little anymore. She’s mature, but has been shaped into a strong and smart woman thanks to those who’ve cared for her in her lifetime, whether it was Lee, Kenny, and now, Javier.

The main problem with From the Gallows is how they deal with a certain death. It happens and there’s no weight to it. After everything, it gets accepted and we are just expected to move on. It feels a little cheap. There should have been more of a fuss made, or a spectacle – or something. It falls flat and it’s a shame because the series has built and built, and I expected more. It’s still a great episode, though, and you end up feeling compassion towards these characters you’ve grown rather fond of. The voice acting has been top notch, but the dodgy animation – while not as bad in this episode – does let it down in some of the more emotional interactions. Despite the flat notes surrounding one of the deaths, From the Gallows is a decent end to a series that grew like a fine wine, regardless of a few damaged grapes.

As far as finales go, From the Gallows is pretty good. There are some great interactions between the brothers, only let down by the treatment of one of the character's deaths.

You may also like
The Walking Dead Season 3AndroidiOS

The Walking Dead: A New Frontier – Episode 3: Above The Law Review

Telltale Confirm a Season 3 of The Walking Dead