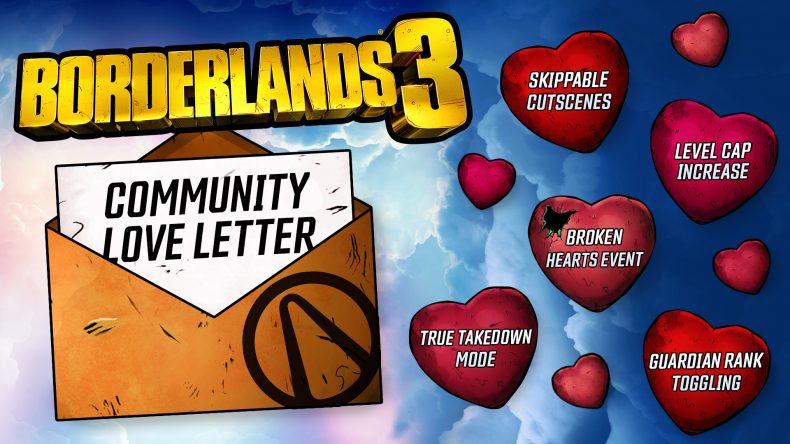 Gearbox and 2K have shared a Community Love Letter that thanks the fans for their support and reveals an updated roadmap detailing new features and changes coming to Borderlands 3. A new seasonal event called ‘Broken Hearts Day’ will feature breakable floating hearts, and when shot at will provide a range of unique effects, such as converting enemies into an exploding pile of loot, and a buff that improves your party’s damage output.

The event will also give you the opportunity to earn rewards, with five in total, including special skins and Legendary weapons unique to Broken Hearts Day. You can choose to play the event in the main menu by turning it on or off in the main menu, meaning you don’t always have to play it. It’ll be going live on Xbox One, PlayStation 4, Stadia, and PC when the February patch goes live later this month, and you’ll have one week before the event ends.

You can read the Community Love Letter here, as it features plenty more details on all things Borderlands 3. At the Gearbox Panel at PAX East on Thursday 27 at 11:30am PT, there’s going to be an exclusive look at the second paid campaign expansion, and a focus on the future content coming to the game. Whats more, the panel will be streaming live on the Borderlands Twitch Channel. You can catch a breakdown of the Community Love Letter on the latest episode of the Borderlands Show, which you can watch below: