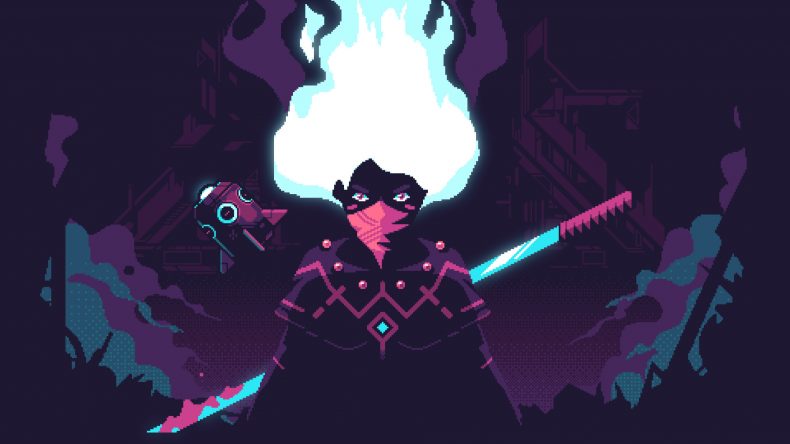 If there’s one thing I’ve seen more than I ever thought possible since getting a gaming PC, it’s the phrase “early access”, only slightly less prevalent than TopShop haul videos on YouTube. It’s a tricky thing too, because on the one hand it means a developer has a multiplayer game they need to stress test for server strength or performance, and sometimes it just means the game is available to buy before it’s finished for some reason. Other times, as in the case of Scourgebringer, it means the dev wants to generate a bit of interest and get some feedback in the process. And Scourgebringer is the sort of game that needs it.

It’s set in a fantasy world where a race of machines has enslaved humanity, holding them in the thrall of a powerful AI called the Scourgebringer. Taking the role of Khyra, you’ll guide her through six worlds (at present only 3 are playable) like a little flame-haired ninja, bouncing off walls with sword and gun. Movement is at the heart of everything in Scourgebringer, as Khyra has an infinite dash move, and can both run up and cling to most surfaces. You’ll chain dashes and attacks to move across each room, destroying the evil machines that uaually spawn in two groups, one after the other. There’s a cathartic joy to the movement, but the Roguelite nature means failure carries serious weight, something that simply feels unfair when failure is so easy. It’s not that Scourgebringer is overly hard, for its genre it’s really not, it’s more that at the moment it needs some serious balancing and tweaking.

For example, the dash move has no I-frames, and so while you’re zipping around each area with projectiles flying around all over the place, it’s very easy to catch a few in the face. With limited health and so few ways to replenish what you’ve lost, you’ll often reach bosses with next to nothing left.

One thing I did appreciate was the ammunition economy. You charge Khyra’s pistol by attacking enemies with her sword, so the more aggressive you are, the more ammo you’ll accrue – and her gun is surprisingly devastating. I wouldn’t call it tactical, but you are always considering the tradeoff between burning though ammo knowing you can replenish it or saving it for the tougher foes in each room.

Scourgebringer has great potential. It looks gorgeous, like something grown in the space between Furi and Celeste, and the frenetic action has an addictive rhythm to it, but there’s no doubt that it needs some serious balancing before the full release. With some more work to bring the frantic sword and gunplay up to the same level as the stunning aesthetic, Flying Oak Games could have a genuine hit on their hands.

Senior Content Editor Mick has been playing games for over 30 years and writing about them for around 12. After drifting from site to site for a while, settling briefly at the now-defunct Made2Game and freelancing for the gone-but-not-forgotten NintendoGamer Magazine, he came at last to rest at Godisageek. Mick has been a reviewer, staff writer and content editor here for some time, while also moonlighting a little for Red Bull Games. He has 4 kids, has written 2 novels, and sometimes even manages to pay a bill or two. You'll usually find him defending the galaxy in Destiny 2, battling evil in Diablo 3, or lurking in the background on Twitter. Find him there @Jedi_Beats_Tank, or on XBL (JediWaster247), PSN (Jedi_Waster) or Nintendo (JediWaster).
MORE LIKE THIS
Dear VillagersFlying Oak GamesScourgebringer