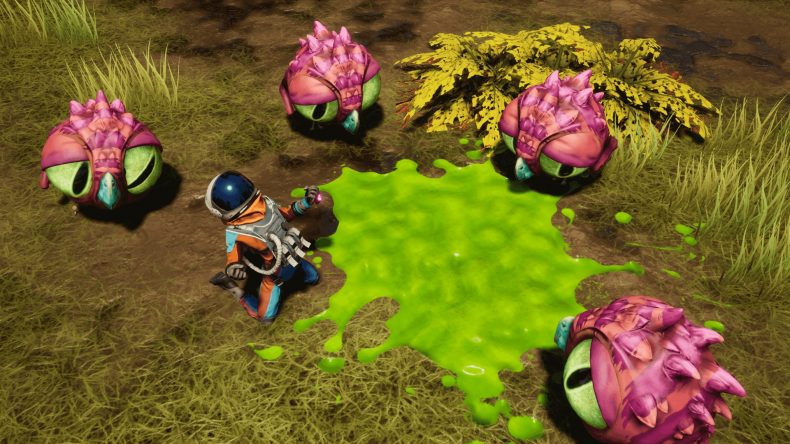 505 Games and Typhoon Studios has announced the Journey to the Savage Planet Hot Garbage expansion will be released soon. Hot Garbage will cost £7.99 and release for Xbox One and PC, on Epic Games Store, on April 15. Not only that but Journey to the Savage Planet will be available on Xbox Game Pass from April 9. There’s no date for the expansion for PS4 other than soon, so a bit of a wait for now.

The new expansion will see you off to a new alien planet, deisignated DL-C1. The whole point of you being there is to investigate reports of strange spikes in pollutants at Kindred Aerospace’s new interstellar waterfront resort. After doing some digging you’ll need to report your findings back to corporate headquarters. Reporting back using the Kindred scanner will unlock new upgrades to gear and abilities. These abilities include lead boots for underwater exploration, a specialised suit for toxic areas, unlimited stamina and something like the power of flight.

Also included is the new trash talking piece of Vyper Corp property, Kronus. Kronus has one purpose which is to berate players left, right and centre. Something to look forward to. You’ll also see new flora and fauna, including a goofy variation of the Puffer. There’s also a fleet of Vyper Corp. cleaning and flying security bots.

Once you’re done with all that the Javelin habitat will have some new commercials for you to enjoy.