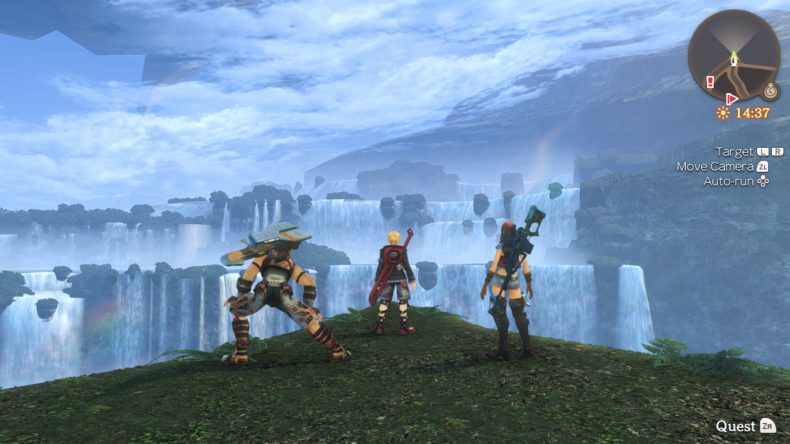 1. Explore but know your limits

Xenoblade Chronicles: Definitive Edition rewards exploration. You earn experience for discovering new areas and even more for discovering secret areas. While exploring, pay attention to enemy name tags by targeting them. Avoid areas with red tag enemies because they will likely kill you quickly. Also make sure you are aware of unique monsters by targeting enemies to ensure you avoid them until you are confident in taking them on. 2. Fast travel is your friend

Xenoblade Chronicles: Definitive Edition lets you fast travel very early in the game. Whilst general exploration is fun it can make getting back to places you’ve previously explored quite time-consuming. Don’t be afraid to fast-travel to speed things along a bit, as there’s plenty of other content in the game to take up your time.

3. Talk to NPCs in new areas

Always make a point of taking to NPCs when you arrive at a new area. Talking to NPCs in new areas not only gets you new quests but also helps you understand the area through bits of information. It’s always worth a chat with the local in a new area for tips and just bits of trivia about the land. Not to mention the quest rewards can also come in handy. In Xenoblade Chronicles: Definitive Edition (and the original), while being a higher level helps, being a lower level has more penalties than normal. You’ll notice as you explore the environments, different enemies has different colour name tags. This denotes their difficulty compared to your current level and should be considered before you engage. You should only attempt red enemies when you are confident in combat and never take them on in a group.

5. Side quests are worth your time

When you reach a new area, you will see NPCs with an exclamation mark on their head. Go and talk to every one of these multiple times until you have taken on every side quest available. Once you do this, the game will mark out enemies, points of interest, and more on the map so you don’t waste much time. Finishing most of the side quests from NPCs with generic names (unnamed quests as Xenoblade veterans call them), will reward you with easy money and experience in some cases. A quest involving killing enemies will be completed when you kill those enemies. You don’t need to waste time going back to the quest giver. 6. Pay attention to side quests with a clock symbol

These side quests are from named NPCs or NPCs without a generic name like worker or security guard. These quests have an expiration date and will go away once certain story things happen. The game is usually good about preparing you for this by asking you if you want to go somewhere or “are you sure” you want to do something. Either way, once you take on quests with a clock symbol, I’d recommend doing them when you can because the rewards are often better.

You unlock the Gem Man’s Stall early on in Xenoblade Chronicles: Definitive Edition. It’s something you should make use of frequently during your adventure to craft new gems. These new gems can slot into your gear to make them stronger. They give you added stats and later on in the game, can make the difference between success or failure. 8. Pay attention to the equipment you earn

There are three kinds of equipment in the game. Normal equipment with just stats, slot equipment (blue icons with an S symbol) that have slots for gems, and unique equipment (pink icons with a U symbol). These have preset gems. You earn equipment through quests, defeating enemies, or through purchases at stores. When you reach a new area and start defeating enemies or finishing quests, check the equipment screen if to see if you earned anything worth switching to. This helps you stay alive more in late game areas.

9. Sell the loot you don’t want

Killing enemies nets you loot in addition to equipment. Initially it might seem a little useless, but it’s actually a useful way to earn some money, particularly early on in the game. If you wish to sell your loot, approach any NPC with a shop symbol in a town and watch you bank balance grow. Just avoid selling any loot that is marked with an exclamation mark. 10. Fill up the collectopaedia but don’t stress about it

The last of our Xenoblade Chronicles: Definitive Edition tips concerns collecting items on the field represented by shining blue orbs. These help you in quests but they also helps you fill up the collectopaedia. This is under collectables on the menu. Filling up each category here for a location nets you useful rewards. Completing a full area will give you an even better reward. It’s therefore worth your time to try and fill it as much as possible. However, don’t worry if you can’t find it all early on, because some of collectables requires a different time of the day or an area you might not have access to right away.