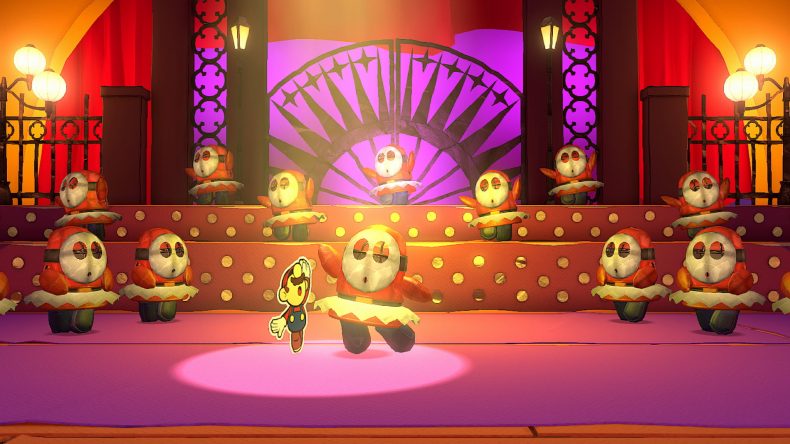 There have been times while playing Paper Mario: The Origami King where I’ve had to double check that Yoko Taro or PlatinumGames isn’t involved in the project. You’d expect whip-sharp writing in a Paper Mario game, of course, but Mario’s Origami companion, Olivia, is literally from another place, and acts like it. Her naivety, her whimsical joy and sense of humour, or maybe it’s the singing, I don’t know, but I just keep feeling like somehow Yoko Taro helped write Olivia’s character.

It’s rare for someone to steal the show from Mario in a Mario game, but Olivia is just so lovely it’s hard not to think of this as her story as much as Mario’s. Indeed, it’s her brother Olly who is running amok throughout The Mushroom Kingdom; enslaving friends and foes, turning their paper-thin forms into 3D origami counterparts, demolishing the world as he goes. He’s not Bowser, because he actually seems competent, and a rousing soundtrack adds drama and, dare I say it, tension and fear whenever he appears. Paper Mario: The Origami King looks gorgeous, which you’d expect. But I’d actually have to say the soundtrack is even better: it actually slaps, and then it rocks – and I mean rocks. But this isn’t new ground for Paper Mario, and fans have been here before: these games always look and sound good, they’re always well written, and it’s the gameplay that people seem most worried about.

Based on the first few areas I can talk about, there are things that will calm fears, and also things that have me worried. Firstly, the combat itself is genius. Before you even start your turn you have to arrange the enemies, which is basically a puzzle solving experience. You can rotate them on a circular grid, you can also push them forwards and backwards, and some of the puzzles are annoying hard, or rather, actually easy but your old mind can’t solve them quickly enough.

As the timer ticks down, it’s fair to say you will panic and be tempted to pay the Toads that surround the battle arena to help you. Rescuing them in the open world means that more are available (there are so many, too), and I leaned on them more times than I’d care to admit to solve the combat puzzle and let me jump on enemy heads in a nice smooth line. This is important because you are rewarded with coins after every battle, and the better you do; the more you’ll get. Complete a puzzle and route the enemy without taking damage: more coins! But this leads me onto my major concern for The Origami King. While the combat is turn-based, entertaining, and sometimes taxing, the battles that are optional feel worryingly pointless. There is no leveling up, there is no bar that inches up as you complete optional fights; defeating wandering Goombas or Shy Guys as they roam the world. It’s literally just coins which, sure, mean you can buy better hammers, shoes, or charms that enhance your abilities. But right now, from the early part of this game, I’m left a little worried I’ll be spending time avoiding enemies, rather than fighting them. So while I can’t say “don’t worry, this is amazing”, I can say “worry less” because the combat is far superior to the past few games, and in fact, the only real concern is whether after a great many more hours, it becomes something I want to skip unless forced into it. But it’s certainly a far better game than Paper Mario: Color Splash, already, to be honest.

The same concerns cant be mentioned when it comes to boss battles though. You’ll likely have seen the trailer that show off the battle system, but the boss battles are a true “wow” moment, flipping the entire idea on its head. Now, the boss is in the middle of the arena, and you have to use icons littered throughout the grid, moving them to enable Mario to approach the boss and deal damage either directly, or via.. other methods (I’ll say no more, I don’t want to spoil it). These are sometimes simple, and often challenging, but always incredible.

What also can’t be denied is the creativity on offer. Every boss has a theme, but more than that, they change up the way the combat actually works, offering new challenges when you think you’ve seen it all. It’s not just limited to the bosses, either, the entire world is littered with things to make you want to explore every nook and cranny, speak to every person, and find every collectible. I’ve been to a Samurai styled theme park, I’ve floated down the rapids, explored dungeons, smashed the back end of giant papier-mâché Goomba in, shared adventures with companions, and so much more already, and it’s so delightful and, frankly, lovely to play. It helps that it’s beautiful, it really helps that it sounds so good and that, interestingly, the opening sections of the game offer small glimpses of beloved characters, but instead shine a light on the lesser used ones, giving backstory to enemies and friends alike that you might not expect.

It’s a very typical Nintendo game, too, in many ways, because it holds your hand more than needed, simply by way of being designed for everyone, and not just the hardcore fans. Sometimes there’s a line of dialogue too many and I’ve been left thinking “I get the joke”, and other times I’d have happily watched Mario and Olivia chatting for hours. It’s a cliche, but Paper Mario: The Origami King is that “Nintendo Charm™” in raw, powerful form, and quite frankly, I cannot wait to get back into it. Isn’t it crazy to think that a few months ago we didn’t even know this existed?