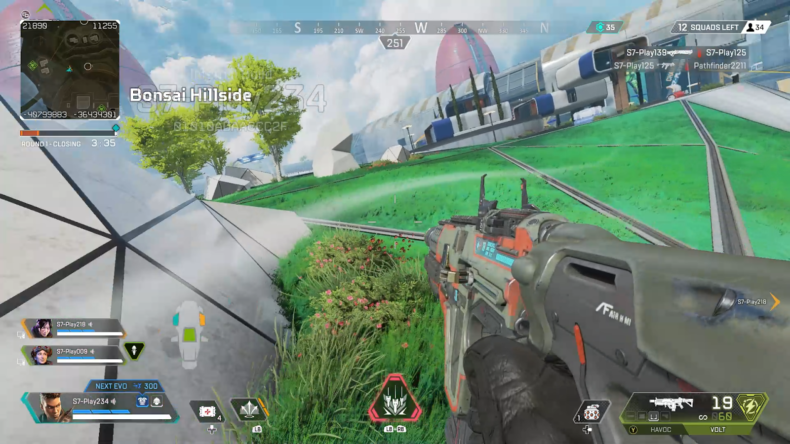 Apex Legends has been on a constant high since its release in February 2019 and Season 7 shows no sign of stopping that. With a new legend, a new map, and a bunch of new features, this is what I discovered in the time I got to spend with it.

Let’s start with the juicy news, shall we? The new legend, Horizon. She’s a badass Scottish astrophysicist with a depressingly sad back story. Greeted with a short cinematic filled with tear-jerking piano and violin, it showed a woman working towards her career to find a better future for her child. Going on one last mission, she is double-crossed and trapped, left in both space and time. Presumably, her name, Horizon, is a reference to the event horizon; the moment within a boundary where the pull is so severe even light can’t escape. This is colloquially known, in regards to black holes, as the point of no return. Horizon is an anomaly and her name is a reference to all she has lost. 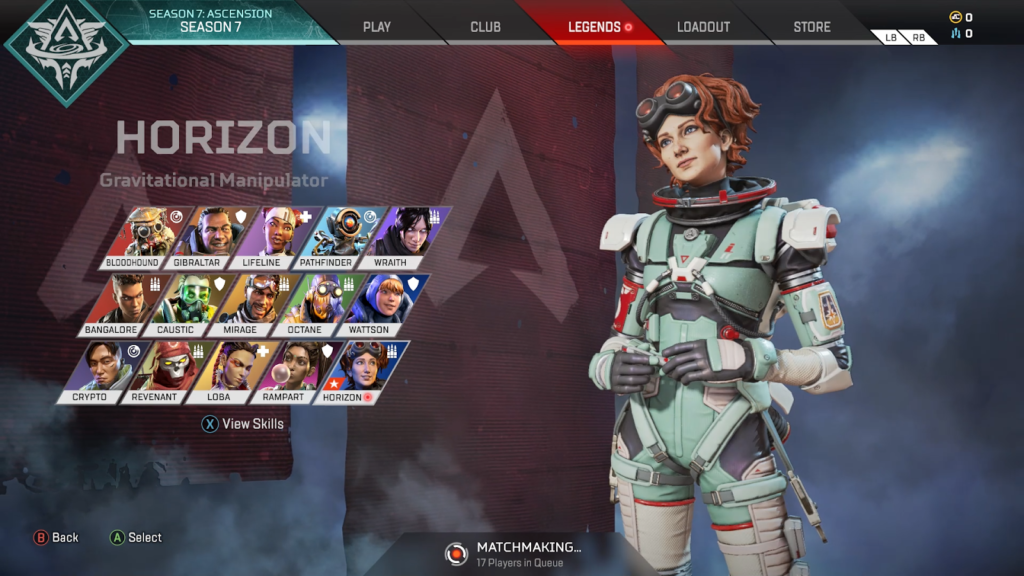 Watching the world pass her by (and also not, timelines are weird) she is imbued with some very special powers, all of which I had the opportunity to try out. Starting with the passive, Horizon’s control and understanding of gravity have given her the “SPACEWALK” ability, granting increased control in the air and a better recovery from heights. This plays into her tactical ability well – the “GRAVITY LIFT” power. Much like Octane’s “LAUNCH PAD” ultimate, it’s a deployable ability reversing gravity and sending you directly upwards. After you reach the apex (sorry) of the jump or leave to the side, it boosts you forward to get away or into combat quicker. This gives an even greater level of synergy and really harkens back to those days of Titanfall 2. This is not the only comparison that can be made to one of the best shooters of the last ten years. Horizon’s ultimate ability “Black Hole” deploys her friendly robot NEWT to create a black hole drawing players in for you to pick them off. Upon being asked of the similarities between this and Titanfall 2’s “Gravity Star” the team were rather forthcoming and stated this was originally conceptualised out of the Gravity Star but without its explosive effects. Dying in Titanfall is a much less important mechanic so this has been nerfed in comparison to stop it feeling too punishing. Characters with high mobility counter this ability well by getting out just in time whilst the tankier slower members are left in the middle like sitting ducks.

Speaking of Apex Legends’ sense of synergy, I tried out “Olympus” the new map in my preview time. When speaking to Dave Osie, senior-level designer at Respawn, he expressed that the intent with new maps is to imbue them with a sense of personality. Maps should feel distinct and offer something others don’t. This is something Olympus offers in spades. From the get-go, a huge ball of space is sat on the map that teleports players. It’s a bit of an eyesore but in a cool, apocalyptic way. It’s entirely avoidable but sort of mesmerising in a way so it’s worth checking out. Presumably, after jumping through the big floaty space ball, the next thing you will notice about Olympus is its architecture. The entire map is floating in the sky and you can fall off if you’re clumsy enough. Luckily, holes are easy to spot and not just random resulting in an empty defeat. There are entire areas without loot that can be manipulated for battles and this adds an extra layer of strategy to each conflict. Why would anyone hang out there? Maybe you should just leave it as no one will be there? This is when you are shot in the back of the head. Before witnessing your death, you might notice the other part of architecture Olympus indulges in, its houses. They have this certain sleek yet unnatural brightness to them. Homes feel quite similar to the bright angular yet oddly curvy homes of the nuclear family. Think Fallout and Nuketown and you have a general idea. Homes are aligned with fields of bright green grass and rigid houselines yet hanging over the horizon is a wandering pack of bloodthirsty kill leaders or a gunship. 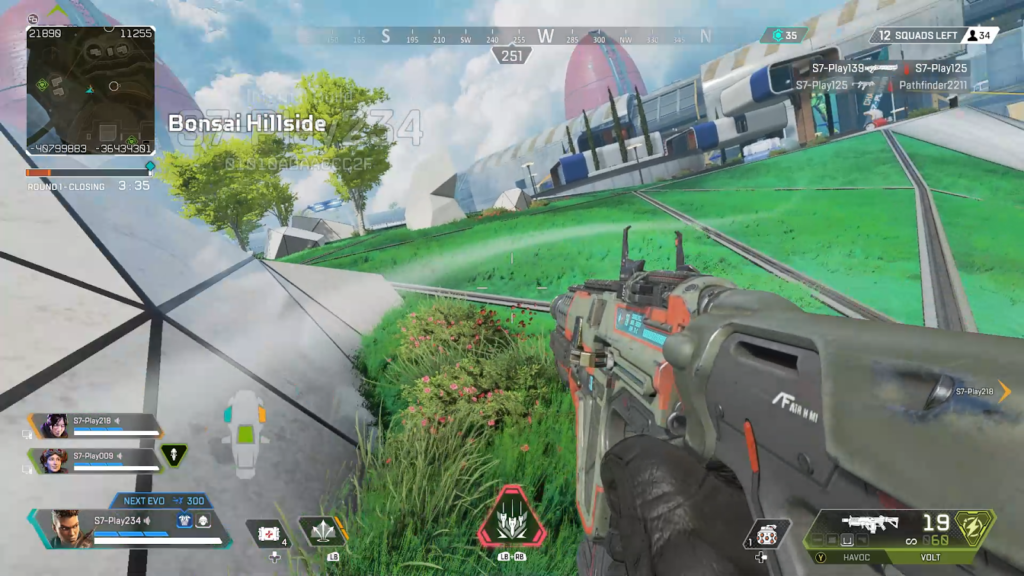 Speaking of vehicles, Season 7 adds the Trident, the first vehicle in Apex Legends. This has a funny little design quirk to it that worked really well in my time in Olympus. It has seats on the side you can shoot from as well as a driver seat. It’s an armored vehicle with exposed sides where teammates sit. Players are really easy to hit from it and become an instant target but it can also be manipulated with abilities. Caustic’s gas can be put on the side turning it into a gasmobile, bubbles of defence can help it and even Horizon’s gravity manipulation works to give it a jump ability. Players are ridiculously reckless with it in a way that is incredibly fun. People know it makes them a target so they put that target on their back even more. The Trident feels much closer to an extra weapon than a vehicle in Apex Legends. You can’t destroy the cars through conventional methods (though you can drive them off the map) so they end up trading hands a lot as old cars are repurposed by new roaming squads. Sometimes bringing a car to a gunfight just arms the squad that wipes you out, only for you to go and blame your teammates.

This “sense of camaraderie” is something Season 7 aims to tackle with its club functions. Back in season 4, the team at Respawn conceptualised having a clan function in Apex Legends but they settled for something much more personal in the clubs function. Having a max of 30 people per club and specific tags, you can find your friends or groups of like-minded people to play matches with. You can do things like categorise for people with mics, people with a certain threshold in competitive play, or other things of this nature. This will mean you can really specify the types of people you end up in lobbies with. As well as only having 30 members per club, you can only be part of one club at a time. This is intended to support a sense of small community and friendship as clans tend to inflate to huge numbers where people don’t know each other. It seems to emulate clubs like big gaming clans do, few 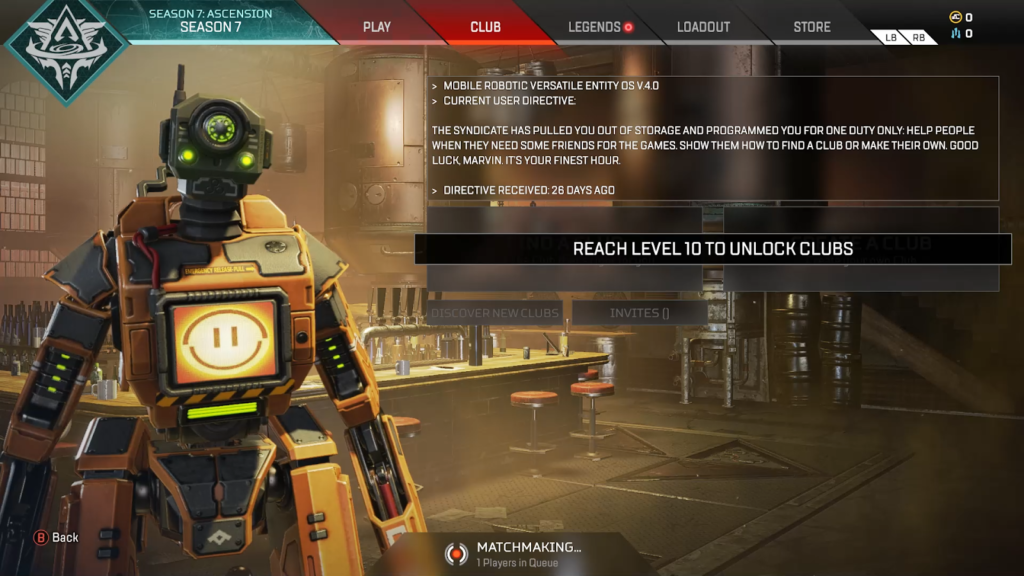 There are so many small improvements, alongside big ones, coming in Season 7 of Apex Legends. As well as all of this, Apex Legends will be available to play on Xbox Series X and PS5 day one via backwards compatibility with a native version coming some point in the future. Whilst the Switch port has been held back, cross-play has been confirmed and cross-progression through Origin and Steam was confirmed in our Q&A. There are goals to do the same elsewhere but nothing has been confirmed yet. With a release date of November 4, 2020, Season 7 appears to offer some very exciting changes. It seems with a new map, a new legend, extra features, and the whole next-gen thing, next month is bound to be a huge one.