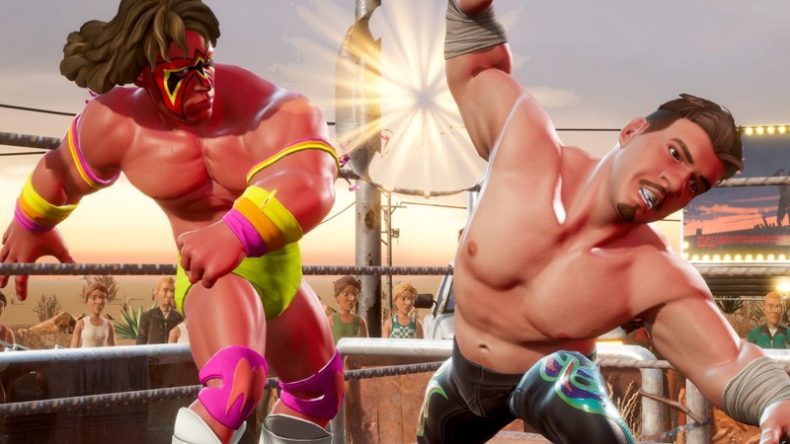 With the first wave of new WWE Superstars available in WWE 2K Battlegrounds, I thought it would be nice to revisit the game and share some thoughts on the best of the bunch. I’ve spent a good amount of time with the game since I reviewed it back in September. As a kid, I owned every WWF action figure. One of my most treasured childhood memories was when my gran bought me my first figure, Jake “The Snake” Roberts. He had a spring-loaded arm that could punch other wrestlers, and from the moment he was in my hands, my obsession began.

Hulk Hogan was next, then Ultimate Warrior and Brutus “The Barber” Beefcake, “Macho Man” Randy Savage, Big Boss Man, and so on. For almost 30 years I’ve been following the biggest sports entertainment company in the world. It’s changed its name (damn you, pandas!), seen hundreds of roster changes, thousands of amazing matches, and countless moments I’ll hold dear for the rest of my life. When I first started watching, it was the characters that kept me watching. Nowadays, everyone is just tough. There are no real characters anymore, and I think that’s why I still watch so much of the early 90s stuff on the WWE Network.

What 2K did with WWE 2K Battlegrounds was give me that warm feeling again. I could pick my dream matches and play them out in a simple and fun way. Move sets aren’t complicated, but the core concepts of wrestling are in place to give me just a whiff of realism. I want over-the-top, large than life matches that feature the heroes of both the past and present. Thanks to the latest batch of DLC, I’m able to create even more dream matches. The Superstars included in the first wave of DLC that was released between November 6 and November 18 come from a lot of different eras, all worthy of a spot in the WWE 2K Battlegrounds roster. 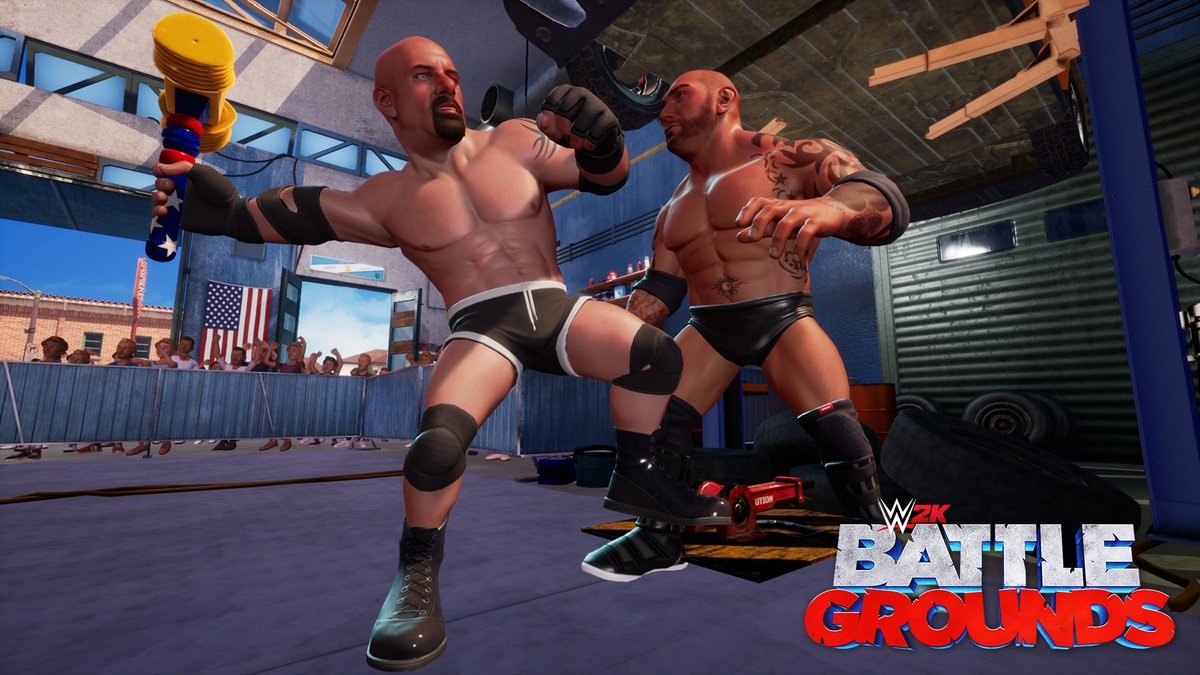 Some more than others, however, hold a special place in my heart. Ultimate Warrior was a troubled guy outside of the ring, but whenever he stepped foot in the squared circle, he produced iconic moments. He was energetic, insane, and an almighty figure that always gave 110%. In fact, the first ever PPV I watched was SummerSlam 1989, where he faced another of my favourites, “Ravishing” Rick Rude (If you’re reading 2K, I’d love him in the game). His match with Hulk Hogan at WrestleMania VI was iconic, and now I can relive that memory over and over again.

Eddie Guerrero is another Superstar you can now play as in WWE 2K Battlegrounds. He was one of the best technical performers and characters to ever lace up his boots. He could play the heel or the face, and always knew how to put on a fantastic match. The inclusion of Goldberg was a no-brainer, but I’m still glad I can play as him. He fits nicely into the Powerhouse category. A legend in WCW, he went on to recapture gold in WWE after Vinnie Mac bought World Wrestling Entertainment back in 2001. Booker T was another one of those WCW guys that went on to have an incredible career in WWE, and is yet another great Superstar that you can now play as.

Batista’s introduction into WWE was a weird one. He made his first appearance on the main roster as a bodyguard to D-Von Dudley, then known as Deacon Batista. Thankfully, he broke out of that character and became one of the most dominant figures of the company throughout the 2000s. He may be more known for starring as Drax in Guardians of the Galaxy now, but WWE fans will never forget the impact he made on the company.

I don’t doubt for a minute that The Usos will get inducted into the Hall of Fame when their time is over, but they still bring it even now. If you’ve been watching recently, Jey Uso has been facing off against his cousin Roman Reigns in some of the most well-orchestrated storylines we’ve seen for ages. As a tag team, though, it’s amazing having them in WWE 2K Battlegrounds. Having them team up against the likes of The Mega Powers or The New Day makes for some great gaming. I love their high-flying capabilities in the game, and they look awesome as well. 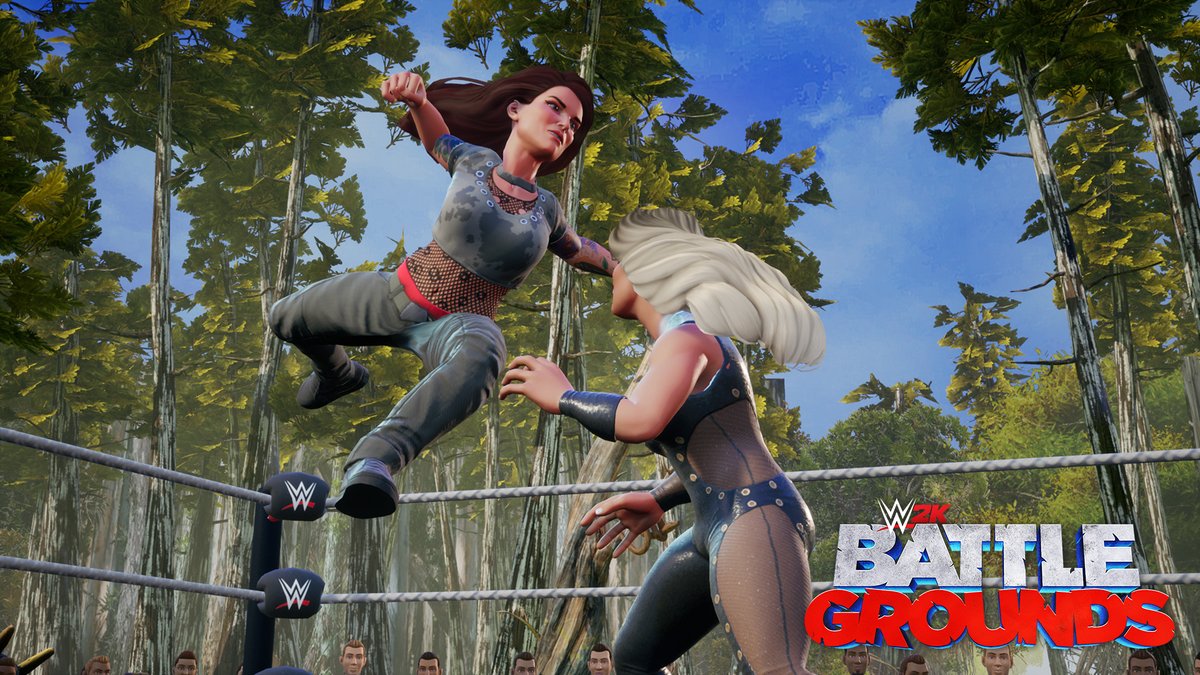 The three female inclusions make a massive improvement to the women’s roster. Although Ruby Riott isn’t the biggest name in WWE, she’s one of the most impressive between the ropes. Her time in the Riott Squad made for some great matches, and I still believe the future’s bright for her. The other two are iconic in the world of professional wrestling. Trish Stratus made her name as a manager for Test and Prince Albert, but after stepping into the ring, she went on to win the WWE Women’s Championship a whopping seven times.

The final woman included in the roster update is Lita. A four-time Women’s Champion, manager of The Hardy Boyz, and all-round performer, Lita has already been inducted into the Hall of Fame, and rightly so. Having the ability to create dream matches like Lita vs Charlotte Flair makes WWE 2K Battlegrounds a hive for “what ifs,” and I can’t wait for the next batch of additions to enter the game. For now, though, every single addition makes sense, and I love how 2K has improved on an already awesome roster with some of the most beloved Superstars of all time.

The next batch of DLC content has already started dropping, and once it’s released in its entirety, I’ll talk about WWE 2K Battlegrounds once again. I love having a reason to dive back in and recreate some of my favourite matches whilst setting up ones that never saw the light of day. With Superstars like Rhea Ripley, “Macho Man” Randy Savage, and Kane joining the fray, I can’t wait.

Video games are cool. Don't let anybody tell you any different.
MORE LIKE THIS
2kwwewwe 2k battlegrounds